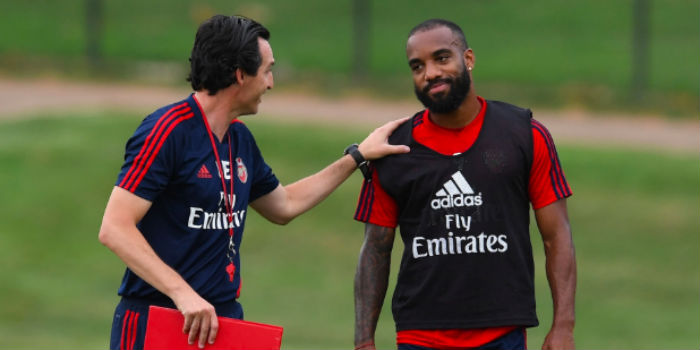 Unai Emery says he’ll play Arsenal’s senior players in the upcoming pre-season friendlies as his starts to manoeuvre his squad through the gears ahead of the opening game of the season at Newcastle United.

The Spaniard has leant heavily on the youngest members of the Gunners’ US tour squad in the wins over Colorado Rapids, Bayern Munich and Fiorentina but expects his established stars to take centre stage when we face Real Madrid, Lyon, Angers and Barcelona.

Facing the media ahead of Wednesday’s showdown (match kicks-off at 00:00 BST) with Zinedine Zidane’s side in Washington DC, Emery revealed that he’s been pleased with the Stateside work so far.

“It’s going all as we prepared with the young players playing and showing their capacity with us, taking rhythm, taking confidence and working tactically with all the players in different situations,” he said.

“Tomorrow is the last game, maybe the most difficult match and another opportunity for every player to show his capacity. But for us the result isn’t the most important, the most important is to use players and have them taking confidence, taking minutes and to share minutes between the experienced players and the young players.”

He added: “We started to playing against Colorado Rapids with a lot of young players and progressively we are using less minutes and to share with the experienced players. It depends on the matches.

“Tomorrow, at the beginning I want to take more minutes with the players thinking about our progress for the first match against Newcastle. But also, we are going to use some young players at the beginning or during the match to continue trying with this difficult capacity against Real Madrid.”

Skip To My Lou

I hope he is not thinking about playing Mustafi and Mkhitaryan.

Ya gooner
Reply to  Skip To My Lou

Or xhaka, just shows how weak our midfield is considering him for captain. He and mustafi cost us the champo league in my eyes. I’d much rather a youth player make the same mistakes and learn from them.

Akari
Reply to  Ya gooner

I get what you are saying but the way our fans are nowadays they will start booing and slating the young player for making those mistakes and ultimately killing their confidence. Then this young player will be afraid to express themselves fully for fear of the same nonsensical and unsupporting behaviour of some fans.

I’m not sure that’s true. Guendouzi made a tonne of mistakes last season and is absolutely worshipped by most. I think our expectations are now so low the kids would get a helluva lot of patience and understanding.

lessthanthesumoftheirparts
Reply to  Ya gooner

Forget that. It shows how leaderless our team is that the only viable option for captain is the 2nd most error-prone player in the whole squad.

Forest gooner
Reply to  Ya gooner

Why scapegoat Xhaka. That penalty miss from Aubameyang was just as responsible. Xhaka has a great passing range and frankly think the ex captain of Borussia and now captain of Switzerland would be the ideal choice

Because he’s immobile, error-prone, and defensively poor, which makes at least one midfielder have to cover for him, which in turn means we suffer in transition and are forced to rely on a specialty player to get the ball forward (i.e. Ramsey), or else get it to the wingers (who suck), or wing backs if we play a back three – which is most likely part of the reason we spent so much time playing the back three, AND why we’re linked with so many wingers this summer. Without Xhaka, our midfield could be far more fluid, dynamic, and less… Read more »

I know that it’s “one game only,” but it’s interesting to read these comments and then maybe take a look back at some older comments, like when he was probably the best player on the pitch in a 1-1 draw last autumn:

Spot on. People who are down voting you don’t know football

So why did Wenger always play him just as Emery does if he is so poor. He is a key player and has formed a great partnership with Torreira.

It Is What It Is
Reply to  Martin

Because we paid £35m

Izzy
Reply to  Ya gooner

I swear men. You’re preaching what’s on my mind. Anyways Ceballos is on his way so let’s hope that improves our midfield I just hope our defense is strong enough though.

Sam
Reply to  Skip To My Lou

Lol why are you getting downvotes for this

Ya gooner
Reply to  Sam

Martin because aubamayang was our top scorer. Xhaka has a great passing range only when he’s in about 3m radius of space. He’s way too limited for the prem I think he’d be decent in a slower league. When he first came I really wanted him to do well because he showed flashes of quality, sadly he hasn’t improved one bit.

Also yen the fact you had to go back to last autumn to find his last great game speaks for itself really.

Of course he has improved as a deep lying midfielder. I wonder why Emery and Switzerland are always selecting him

It Is What It Is
Reply to  Martin

Definitely not what we thought we were going to get for £35m. Probably a Stat DNA signing. Wenger couldn’t even nail down his best position. He can wear #10 for Switzerland all he wants, Arsenal have had, and need better.

It’s the same thing over and over, i can see it when I close my eyes. He’s just a risky player. I don’t need that. Mobility, agility, awareness and decision making could improve.

“…we are going to use some young players at the beginning or during the match to continue trying with this difficult capacity against Real Madrid.”
I was lost at “Capacity.”
What does he mean please?

Get that superman looking pedestrian out of the midfield. Give Torreira the job which he had in Serie A, dedicated tackling, intercepting midfielder. He had insane stats for two seasons doing that. With that security, experiment with Willock in league games. 4-3-3 would have suited Torreira as DM, Ceballos as CM alongside variety of other options we can consider to pair with him: Guendouzi, Willock, Ozil.

Only trouble with this analysis is the vast difference that the PL and Serie A present in officiating. Torreira was pushed off the ball easily time after time last season and didn´t get a whistle. Which he would surely have gotten in Italy.

Pushed off the ball frequently, that’s true. Torreira is an energetic and talented player but because of his limitations in size he is not the solution himself. But he is a very usefull player in our squad. Maybe good balance is the key.

Except torriera was doing that for us alongside Xhaka. Weve always had a deep lying ball playing midfielder, torriera shouldnt be burden with everything. To be fair Xhaka dictates or play and keeps things ticking over, torriera does the hard yards when we dont have the ball and wins it back and starts the counters. We cant put both on his shoulders. You only ever get one Viera in a lifetime.

This made my day. And my ebening.

Your username also made my day and ebening, as much as the comment. Thank you to both.

But a protagonist and got better english than me. Mocking him is a must anyway.

We shall be with A good midfieald without xhaka [Torreira,Caballos&Willock some time Guendouzi] it will look amaizing

I kinda liked it when Emery started with a meritocracy.
I’m not saying play the young players, or play them all the time, but I just don’t like the idea of a preset hierarchy.

Just feels like, even if a younger player is playing better, he won’t be selected because he’s not senior enough, and instead will pick a senior player even though he’s badly out of form.

He knows who he will keep close to first team from the younger cohort. 1) (Potentially IMO…can’t be 100% certain of course)Nelson Even with new signing out wide), Nketiah, Willock, Macey. 2) In more peripheral League cup and early stage europa/FA, Saka, John-Jules, Burton, Martinelli (They can benefit from strong loan thereafter but plenty of time on their side) We now have to determine excess in senior squad for cull and we frankly need to get on with the business of selling. Jenkinson and Elneny for sure. Give them away for free. Mustafi (can be done but difficult) or Chambers… Read more »

Hope to see more of Chambers.

Also hope Holding is fit to start. Want to see Nelson more and also AMN in terms of younger players.

Ozil another one should bear a bit more scrutiny.

Next season’s defensive line up at Cback can go many ways. : 1) if they bring in a solid option like an Umtiti, BOTH Chambers and Mustafi can leave. Would love to see Umtiti-Sokratis-Holding-Bielik 2)if sllghtly less experienced but solid (say an Upamecano or Kayote or Soumano) then Sokratis and Holding plus one of Mustafi or Chambers (Likely dependent on offers in market and in Chambers case in particular his desire to stay and fight from 4th pick)’ 3) if we buy Saliba (for whatever inexplicable reason at risk to loss down in the future and with no immediate impact)… Read more »

It epitomizes Gooner negativity that the first words of the first comment to this benign story is, “I hope he is not…”

Is it just me? Or does Emery look like Professor Snape?