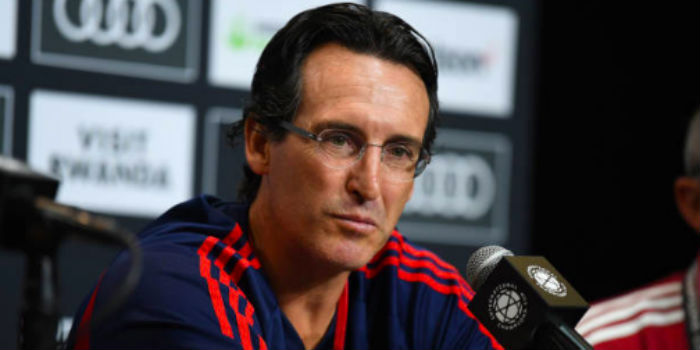 Unai Emery says he’s yet to make a decision about who will be Arsenal’s club captain next season but, as was the case last season, he’s open to the role being shared between players.

The Spaniard appointed Petr Cech, Aaron Ramsey, Mesut Ozil and Granit Xhaka as deputies to Laurent Koscielny ahead of the last campaign but it seems fairly likely the Frenchman will lose the armband in light of his decision not to join the tour of the USA.

With Cech and Ramsey leaving the club and Ozil not exactly high-up on Emery’s Christmas card list, it does suggest our Swiss midfielder could be in line for a promotion.

Asked about the issue ahead of tomorrow’s friendly with Bayern Munich, Emery told his pre-game press conference: “We spoke a little about this and last year we had Laurent, Petr Cech and Ramsey.

“At the moment, Koscielny has a contract with us but I think they are going to speak, the club and him, about whether he continues or not.

“We have players with the capacity [to be captains]. One is Granit. Last year also he played so much as a captain, and was like a captain in the dressing room.

“We also have Mesut and Nacho, and also other players, they can take this position also. I want from three to five captains in the team.”

For his part, Xhaka would be up for the challenge, but he, like the boss, thinks the dressing room needs collective leadership.

“It is not about the armband,” he told Arsenal.com. “We have to work well together on the pitch, out of the pitch and we have to work together, all of the players.

“If the club and the coach gives me the armband I will be happy of course. I will be very happy because it is something special. But it’s not my first time [to be a captain] because I have been the captain here, I was before in Germany and the national team as well.

He added: “Our leadership improved last season but this is not something you can change in one day. You need time and in my opinion, we are on a good way to create something special in the team as well.

“For everyone, last season was something new. We had new staff and we had to learn new ideas from the coach, but I think we did well.

“We lost the [Europa League] final, a big game for us, but it was the first year together. It’s the second year now together and I am looking forward to making a better season than last season.”

Xhaka’s attitude in training is known to have impressed the backroom staff and of the players on the pitch he’s usually the most vocal, so it wouldn’t be a surprise if he were handed the job. It would certainly be some coup for a player who is yet to convince many on the terraces that he’s right for a role in the centre of our midfield.

Arteta is quizzed on Ozil…again

For me, having 3-5 captains sort of dilutes the role. Captain and a vice for me. And they should be regular in the team too. I cant see Nacho playing more than 60% of the time.

Problem is: Is there anybody in the squad who’s playing regularly, consistently performs well and has the appropriate character to be a captain?

It is down to selection by Unai. He needs to settle down his team than chopping and changing every match day.

Only laca ticks all these boxes potentially Leno down the line.

Lacazette is the only player that really comes to mind

But Laca likes to be quiet by nature. I am not comparing the two players but he is as quiet as Zidane who is now the manager of the biggest team in the world.

I like Xhaka, I think he’s a player on the rise, he’s coming into a good age now

Granit has grown into a better baller as time has passed at arsenal. He does give the impression that he plays for a big club already and it’s not a stop gap to something bigger, or a place for older players to wind down their careers at reasonable pace ,where the pressure of previous clubs have taken their tole. No more of the second type please eg Ozil cech licsteiner etc , none of which saw Arsenal as a step up (rightly) but more a convenient pay pack

Regardless of how good Xhaka is as captain, you need someone who will pretty much be guaranteed to play every (most) games. Two players come to mind. Leno, Lacazette. Our options are thin.

On another note, anyone ever bought a player and they’ve immediately become starter and captain?

You forget William gallas a few years back

It didn’t work out well

Bellerin can be a captain. So shall auba and papa

Sokratis is a good choice. Given our situation with CBs, he is a definite starter as long as he is fit. Leno is also another good choice, different to Sokratis, seems calm, another sure starter.

Sokratis is too “yellow cardy” for me. He’s always playing on the edge of the law and I feel like you want a less controversial player taking the armband.

A P
Reply to  PolyEmery

Guaranteed to play? Guendouzi it is then.

Laca was dropped a few times last season… often enough for me to question your assertion.

Options seem to be:
Leno / Sokratis (based on appearances using your suggestion of making a guaranteed starter captain)
Xhaka (based on him being captain last season)

Can’t see who else would be in with a shout.

Xhaka was a regular last season and his attitude on the pitch is good.

It’s his performances on the pitch that should be the worry. He gives away more penalties and stupid chances than anyone bar Mustafi. And even at the best of times I don’t see much more in him than a long ball merchant with the occasional long range banger.

Emery seems to love xhaka and when fit he plays him. I don’t think he is a great player but think he would be a good captain, seems to be vocal on the pitch and talks to younger players giving encouragement.

The only persons to decide are the coach and the players. Sorry, guys, but you’re none of that.

The only people that decide on transfers and money issues are Sanhelli, Vinai and Stan. WeCareDoYou is bullshit because we are none of them.

We have a tradition of giving the role to a player, and then he’ll leave us soon after.

Hopefully we’ll get a proper captain as Tony Adams who stuck with us through thick and thin.

In which case perhaps we should hand Mustafi the armband!

glad I made your day. Seek and thou shall find.

Maybe Mustafis mistakes are so obvious and costly + his sliding challenges and “it wasn’t my fault body language” makes for an easy scapegoat?

Does anyone know his numbers compared to the other defenders last season? Might not be that bad from an objective angle

Holding then…He can be our captain for years to come

If he can show what he’s about I really back Chambers for captain and Holding vice. But that’s unlikely to happen in an official capacity this year.

Chambers isn’t even the best in his position. Why on earth would you suggest he’d make a good club captain?!

I think there’s a lot to come from him, he’s a talented player who could very well be the best in his position if he lives up to his potential.

Hector for me. Cares about the club, plenty of experience (for his age) and seems respected by everyone in the club

I love Hector, but I think an ideal captain has a no-nonsense fear factor about him which I don’t think Bellerin has. Personally i’d go for Papa, depending on how good his English is now, or failing that, Leno.

the phrase “rearranging the deck chairs on the titanic” springs to mind.

Usually in Arsenal is that whoever gets Armband leaves the club following year. So why dont you choose who you want to get rid off ?

Yep. Armband to Mustafi it is then.

Just make Bellerin the captain, young, intelligent, not afraid to speak, understands Arsenal and already 181 caps for the club. Also speaks Spanish and our manager is very much still learning English.

I hope it’s Bellerin, he’s been with us forever, he seems thoroughly decent, and as Holdini says he’s Spanish, the most London Spaniard I’ve ever seen, but still a good shout.

I would give the armband to Sokratis

Ozil for me. With the bleached hair and armband he can’t go missing, he won’t let his teammates down.

It’s only that they are young/have a lot to prove but the likes of Holding, Chambers, Bellerin and Leno should be the up and coming leaders in the squad. As for right now, the people you’d want to call captain aren’t really leadership material. Xhaka doesn’t exactly fill me with confidence, you can’t have people like Ozil and Mustafi wear the armband when it’s clearly known they’re not even wanted at the club. Sokratis is a bit too prone to controversy to be a skipper for me. So it’s only really Auba and Laca and Monreal and I’m not sure… Read more »

For Christ’s let us appoint a proper captain with leadership skills and who actually plays and leads by example. Forget the 5. Our recent history in captains is dreadful. And look at the results of this.

Ozil is not the sort that is a natural leader. So no.

I think someone at the back or close to the backline that can see the play and organize will help.

Either of Granit and/or Sokratis for me. They are fairly senior and can lead.

not too many either so we have some sort of accountability.

Granit in particular has grown last season and improved his game. He receives the ball better and generally has better awareness of his surroundings.

It will be a mystery only to some people why he started ahead of Torreira most season.

And before anyone (inevitably) brings up the subject of red cards and Granit, firstly he doesn’t get as many as some prefer to imagine.

Secondly who is Patrick Viera? Comes with the territory.

The other person I think may be up for it in a season more is Leno.