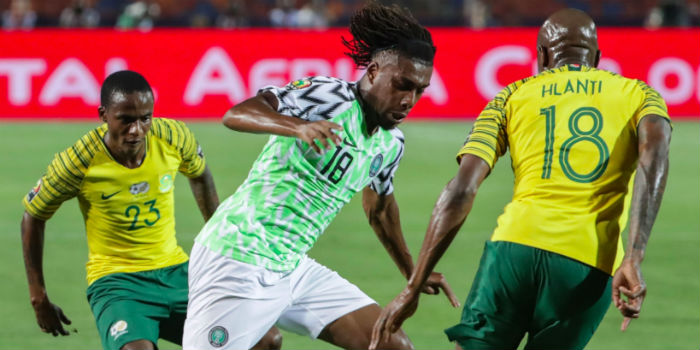 Alex Iwobi provided an assist as Nigeria beat South Africa 2-1 to book a semi-final showdown with Algeria on Sunday night.

The Arsenal midfielder was instrumental in Samuel Chukwueze’s opener, dancing down the left flank on 27 minutes and then cutting the ball back to the Villarreal man who finished at the second time of asking.

Chukwueze is the lad who was supposed to join the Gunners at the same time as Kelechi Nwakali in 2016 only for passport issues to get in the way.

South Africa had to wait for VAR to overturn an offside decision before celebrating Bongani Zungu’s header on 71 minutes but Bafana Bafana, who’d knocked out the hosts Egypt in the last round, couldn’t hold on for extra time.

In the dying stages, Udinese’s Troost-Ekong bundled home from close range late on to win it. His attempt at a knee slide on a very dry pitch, didn’t quite go to plan. But he was mobbed by his teammates all the same.

On the other side of the draw, Senegal will play Tunisia. The final is on Friday, 19th July.

At this point, it’s pretty much certain that Iwobi will miss the start of the new Premier League campaign.

Good for Alex — this will help in his development. He can be a very impressive footballer, and just needs a little more work. On another note, does Emery know what he’s doing? Aside from some coaching gaffes at the end of the season, I just read, and heard, that he’s not interested in Ziyech (Ajax star that wants to come here) for 25 million. He’s also apparently got no place for Bielik. And then there was this Ramsey guy … who knows the real truth behind these stories, but they make me wonder if we have any clue how… Read more »

he is a piss poor replacement for wenger IMO.
Clueless tactically, still will be experimenting with the formation come December.

People were clamouring for change well change we have got , best get used to becoming the liverpool of the 90s and Noughties- living off past successes – well at east we have youtube to bring us some memories

hibernation mode for the next decade at least

I totally agree. At this stage, how is literally nothing happening still? No one coming in, no one going out.

Nicely said @Futsboller. Currently there is a stand off, because big teams like Barca or Real are trying to raise funds with their shitty players (i.e Vasquez, Malcolm, Coutinho,…) . They won’t get what they ask for which will force them to sell high value fringe players (Dembele, Isco, Umiti…) but it won’t happen until we near the end of the transfer market. Let’s wait and see if we have a clue or not. Personally I would be satisfied with Zaha, Tierney and a big badass defender (Umiti?).

How could you misspell Um’tit’i when he’s got a tit right in his name.
Once excused, but twice…..

I would be satisfied with that too.

A bad season doesn’t mean Coutinho is shit. He is better than every single player we have.

I have some sympathy for Emery though. What we do know is that money is very tight at The Emirates. We will mainly be shopping in the bargain basement – transfers with extended repayment periods, loan deals, more reliance on home-grown youngsters etc. As to the players you mentioned: who knows what Ziyech really wants, but whatever it is, Emery may not want to spend more than half his budget on one new player; Bielik hasn’t featured for some reason or other that I don’t know and will probably go; Ramsey went simply because of pressure on the wage bill… Read more »

I like Emery alright but he has similarities with Wenger when it comes to his team defending and he is a better coach for cup matches than leagues because for league success you need an identity as a team and a good defense while for cup matches you adjust according to the opponents. And he is not a good man manager for players.

Big mistake letting Ramsey go. Are best player last year and just cause he doesn’t fancy him in his team we let him go? What happens now when emery gets sacked? Where stuck with a midfield of gendousi and xhaka. Fucking filth. I’d rather a midfield of denilson and flamini.

I musta misread the headline! Coulda swore it was about Iwobi.. ?

I think Iwobi is nearing to the the point where he must prove himself at last – This AFCON was a good opportunity, but to this day he didn’t manage to do it in my opinion. If we would like to place Arsenal among the very best 10-20 teams in the world and Iwobi aims for a stable place in the starting 11 then he should definitely stand out in a Nigerian team like this. Not because they are that poor, but the average value of a player in this squad is far less than the average player’s value/quality Iwobi… Read more »

Have you been watching Nigeria games on AFCON?

He definitely did stand out and has been by far the most important player for Nigeria on the pitch. He is having extremely good cup and the only thing I am not happy about is that he’ll be missing from the preseason prep.

Yes, I saw every games of Nigeria.
To me who stand out are Ighalo, Chukwueze and maybe Etebo and Omeruo.
I’m not saying Iwobi is among the worst ones, but if he would like be our first choice player supporting Laca and Auba – the comparable players are: Bernardo Silva, Draxler, Gnabry or Isco.
I’m not saying we should offload him or something like that, but I think he should step up to the next level in the near future

You saw every Nigeria game yet didn’t mention Ndidi.

Iwobi needs to play as an 8 in a 3-man midfield.

I doubt you’ve been watching the same Nigeria I’ve been watching in this AFCON. Iwobi, Chukwueze and Musa have been terrorizing defences. Ndidi has been rock solid in midfield, so has been Etebo and Simon to an extent. Omeruo and Aina in defence have been exceptional.
Iwobi has been having a great tournament.