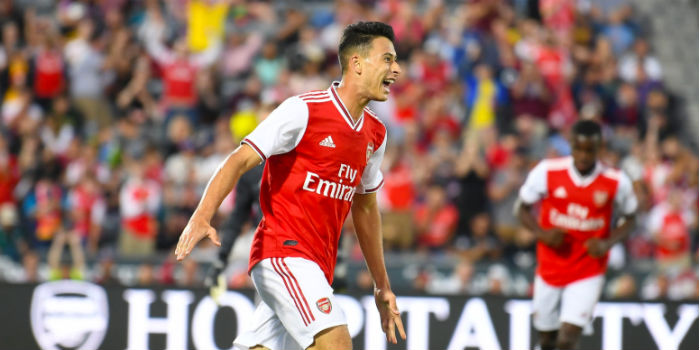 When Gabriel Martinelli finally completed his move to Arsenal this summer, there was some uncertainty regarding what his first campaign at the club would have in store for him.

The Brazilian attacker has shown during his fleeting appearances for the first-team in pre-season, however, that he could be a useful member of the squad during 2019/20.

Martinelli was on the scoresheet against Colorado Rapids in his first appearance, while he also found the net against Lyon in the Emirates Cup only for the goal to be ruled out for offside.

The standout part of his pre-season so far, though, came against Fiorentina, when the 18-year-old made an excellent run, albeit with his subsequent shot lacking conviction.

It is important not to expect too much too soon from Martinelli, and it seems likely that he will be eased into action via the cup competitions.

Unai Emery will surely have been impressed by what the youngster has offered so far, especially when it is taken into consideration that Martinelli is also prepared to track back with regularity.

The Europa League should be the perfect platform for Martinelli to express his talent and it wouldn’t be surprising if on some occasions he featured for the U23s in order to build up his sharpness.

The initial signs have certainly been very encouraging and as the campaign progresses further opportunities could open up for Martinelli as injuries and suspensions occur.

Tonight Martinelli could receive another chance to demonstrate his quality as he has been named in the travelling squad for the friendly against Angers.

Featuring in Sunday’s game away to Barcelona would also be an excellent experience for a player who has shown no fear so far in adapting to the new challenge that he has been faced with in England.

I think this kid has a great opportunity at getting serious game time, ala Guendouzi from last season. Iwobi and Mkhytarian are way too inconsistent, so there’s a spot in the team up for grabs if he wants it.

Like what I see so far. Super quick and direct.

Very early days yet of course but he certainly looks promising. Doing well in friendly games is an indicator of sorts but a much better test will come on those dark, rainy, evening games at places like Burnley – the kind of games that Ozil doesn’t like playing in! We’ll see how he does then.

Martinelli is vying with Nketiah. Eddie has tremendous instincts though.

Not much of a wow factor IMO to recommend appointing Edu over a more experienced man in Campos but then that may also move out Raul.

Still as much as we think we are doing great business, I think we can do better yet.

We have been creative with Cebellos and (if) Pepe but we are also kicking some cost down the line which can potentially come back to haunt us.

“Not the same” … as what? That aside, it looks from press reports that we’ve not finished doing business in this window. Tierney appears to be back on as we’ve agreed to Celtic’s demands to restructure the instalments. There’s also talk of Zaha being on again and Rugani from Juve. Can’t see us getting all three, and probably not more than Tierney without selling someone for a reasonable fee. All quiet on that front. Anyway, we’ll see.

So much this! Jeorge is the best in the business as far as I’m concerned.

Shouty out to the photographer as well, great photo and kit looking gooood

One thing you cant teach is raw pace and this guy has it. I can imagine in Edu’s black book of all the emerging talent in Brazil he told us to get this kid…Excited!

Aubameyang I’m told has pace but many times he actually loses footraces to far slower Cbacks.

Part of the reason I think is his pace is only inherent when up to speed. His acceleration may be slower and needs a bit of work.

Certainly no where as electrifying and frightful as Henry’s.

I didn’t think Martinelli’s pace was all that. It was his movement and awareness of the space behind that was more impressive.

Pace gets you know where if you don’t have ideas how to use it. Walcott.

Totally, let’s bring back per, doesn’t matter that he has no pace.

If he loses the race, they clearly aren’t slower then are they ??‍♂️

Have you by any chance ever heard of a thing called nuance, Santori?

What utter nonsense!!
Martinelli should not play for the under 23’s that is a step backwards in his development..

He should go on strong loan.

Was in Charlotte and saw his run live. The kid has unique speed and dribbling. Finishing is still loading, but one for the future for sure! Dreaming of an Arsenal team featuring Nketiah, Nelson, Saka, Martinelli, etc in five years??

We’ve seen this before. The Jeff was trumpeted the same way as tricky and skillful.

Its called flavour of the month.

Too many fans easily wowed.

Not saying he won’t amount to something but if this is the reason why we are appointing Edu as Technical director (whatever that capacity is), it s a weak one.

Martinelli looks to have decent instinct to goal but too early to tell. With Nketiah impressing, I would think Martinelli (given age) is best out on a strong loan.

Hope to see him featured against Angers along with Tyreece.

Looks like Martinelli is the new Elneny to Santori.

Well, after having a nervous “who will we get with our budget?” period, this has certainly turned out to be a flabbergasting window. Jaw droppin to say the least. Who woulda thought!! What an attack we’ll have! As if Laca and Auba wasn’t monstrous enough (but Auba needs to convert his chances more). Auba, Laca, Pepe, Martinelli/Nketiah/Willock/Reiss, Ceballos…. But we need to cement the rear. That’s the most crucial. The number of goals we conceded was plainly incredulous. And the current options we have are worrying. And that’s an understatement. Kosc is all but gone. Leaving us with Mustafi (whose… Read more »