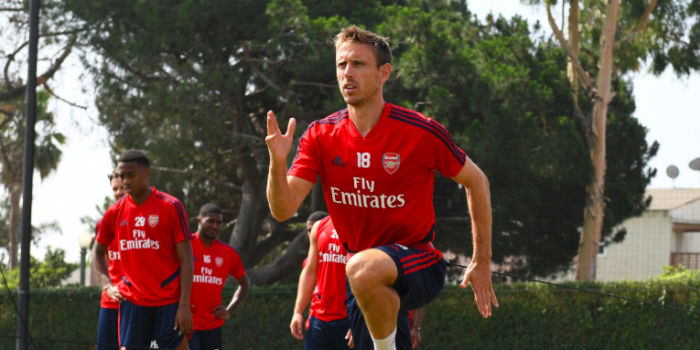 Nacho Monreal says he has no intention of leaving Arsenal this summer despite a link with Real Sociedad.

The Spaniard, 33, is under contract at the Emirates for another year and it’s believed we even have the right to extend that for a further year.

Speaking from Los Angeles where the Gunners are getting ready for a first pre-season friendly, Monreal quashed talk of a departure.

“That’s all rumours,” he told Football.London. “I belong at Arsenal. I still have a contract. My idea is to stay here.

“It’s a great club and I feel really comfortable playing for Arsenal. My idea is to continue playing here.”

While Monreal may be happy to stay at Arsenal, his future as the club’s first choice left-back could come into doubt if Unai Emery spends big money on Celtic’s Kieran Tierney.

The Gunners have spent several weeks trying to persuade the Scottish champions to part with their prized asset but haven’t made much progress yet.

Asked if further competition in his position could see him switch attention to life as a centre-back, Monreal said: “My position has always been left-back, this is the position I enjoy most.

“Football is changing, obviously sometimes our centre-backs have got injured in the last few years and the manager has decided I have to play in that position.

“That’s what I did but my position, and where I enjoy playing, is left-back.”

While Arsenal get ready for the new season Stateside, the club captain Laurent Koscielny decided not to travel with his teammates. After talks over a new contract broke down, the Frenchman, who has a year left on his current deal, has made it clear he wants to leave the club this summer.

“We respect Laurent a lot because he has played for Arsenal for a long time, he’s our captain,” he said. “It’s something between the club and him.

“What I would like is they fix the problem and I think they will do it.”

Turns out Koscielny plays left back too.

Left back at London Colney.

Sadly he probably won’t be right back for us in the future. I’ll get my coat.

Amazing how clear and straightforward the truth is when players speak it. All these rumours we get ourselves wrapped up in and warped out over. Sounds like Celtic are playing serious hardball over Tierney, so good to hear Monreal is still dedicated to the cause. If Emery can form a team, a real unit, out of these players, and allow them to express their attacking potential, I think we might be all right this season.

Just in. Celtic rejects Arsenal bid for Tierney. Apparently we still trying to snag him on the cheap. Honestly, i hang my head in shame for this club. We are a joke. Have been for a while now and will only continue until fans finally decide to take back their power and force Kroenke’s hand. Am Nigerian so i don’t get to have a say in this. I can only dream.

Just bring whoever man, at least some fresh energy and let’s go again this season.

Koscielny is gone. I really can’t see him back in the team after this…

What happened with Saliba…did we lose out on him or not?

Given the reports were saying his signing was imminent and now they’re suddenly not I would imagine we’ve likely lost out unless we put in a higher bid again, which we won’t because we’re cheap.
The cunts down the road would have to negotiate all the personal stuff now too so that’s probably why it’s taking a while.
I’d love it if he snubbed them for us in the end, but money talks.

Money, as well as CL football and a better manager. Having said all that, in a year’s time all that could’ve changed.

Please stop this CL nonsense. Other than the worldclass players this doesn’t count. In general, players care more about their wages. Worlclass players even wait a couple of years to play CL if their is a rich new owner with a big project (Chelsea, Aguero and Robinho to City).

Good news. Ok his legs may be going, but he covers LWB, LB and CB. LW at a push. Will pop up with the odd goal.

Monreal is a fucking dude and I bear no shame or regret in being the only guy in the pub who stands up, when he’s coming on as a substitute, to loudly sing the Nacho Man song.