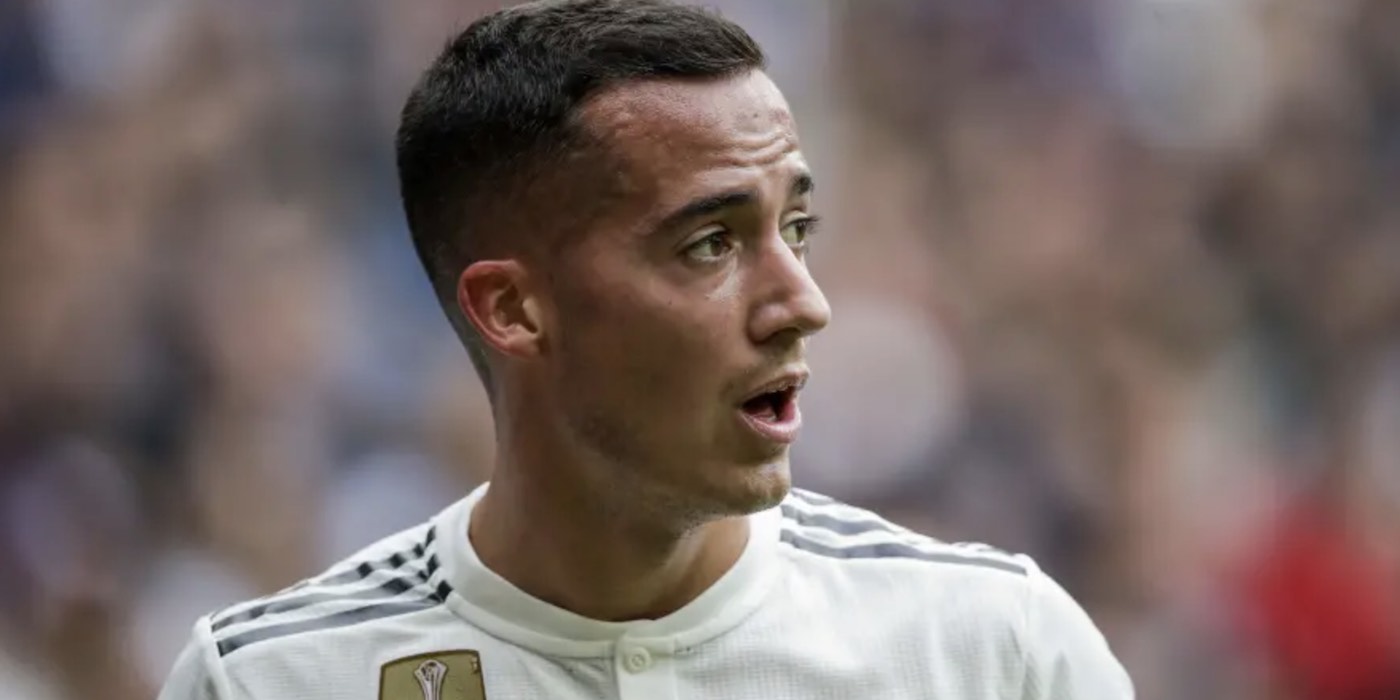 Spanish sports daily AS are reporting this morning that Arsenal are in negotiations with Real Madrid over Lucas Vasquez.

The deal is apparently being driven by Unai Emery’s desire to bring the player to North London, while Inter, Bayern and PSG are supposedly interested in the 28 year old as well.

The attacking midfielder has spent his entire career with Los Merengues, bar one season on loan at Espanyol, and last season made 47 appearances in all competitions, scoring 5 goals and making 4 assists.

It’s not a particularly impressive return, and he was a key part of Real Madrid’s worst domestic season in years which doesn’t exactly make him hot property.

Zinedine Zidane’s recruitment this summer has left him surplus to requirements, but a price tag of around €35m suggests there’s likely to be a considerable gap between any offer we make and what Real Madrid want.

Arsenal also have to consider the fact that they have a clutch of players between 28 and 30 whose resale value is diminishing every season, and need to prioritise younger signings who can potentially add value to our transfer fund if they mature and develop well.

All things considered, at the price Real Madrid are asking based on what you’d get in return, we reckon this one is going to score a scuttery 9 on the Poo-o-Meter.

I hope this is fake news, because he’s average at best. Rather have Nelson or Willock for nothing.

Well said… and I hope the management pay much more attention than media to the question of replacing Ramsey. I really feel that we underestimate the importance of losing him.

If these are Emerys inputs , perhaps he shouldn’t be sent an invitation to the next transfer meeting? I’m sure Freddy has better names who already happen to be at the Emirates.

Why do people keep saying we need a replacement for Ramsey? We had an unbalanced midfield when he was here so I really don’t think it’s wise to waste funds trying to replace him rather we should try to find the perfect partner for the crop of players we have.

Sorry mate I strongly disagree. If we dont replace Ramsey it would be a disaster. Results didnt really go our way since he got injured and we lacked goals from midfield.i get where your coming from but I think you mean we had an unbalanced squad If we had our first 11 available for 50 games of the year. What Ramsey gave us was versatility. CM, number 10 and out wide. The guy throughout his arsenal career played where he was required and did a shift. I cant really see anyone stepping up into that role. The other guy we… Read more »

I agree in that he shouldn’t be get replaced because we can’t. We just need to change our style of play, rather than look to replace. Like how cesc was a different player to Vieira.

A Different George
Reply to  Archer

We were at our best with our four best attackers on the pitch at the same time: Lacazette, Aubameyang, Ozil, and Ramsey.

A Different George
Reply to  chuffy

We could have had Ramsey for nothing.

We could have had him for 250k a week. That’s a lot for a player who is injury prone and up till that point hadn’t performed to expectation.

I don’t know why us fans worry about what the players are making. We seem to be the only team worried about ffp and where the most expensive ticket in the land. How is the owner and the board getting away with this shit?

Mick Malthouse
Reply to  Ya gooner

Bucket loads of meh being shovelled this Summer!

SciGunner
Reply to  Ya gooner

Average player at best. Would seriously prefer to play Kolasinac as a winger than this guy, especially if Tierney comes in, then Sead wont have to worry about his shit defence so much.

Kola is wasteful in possession and is predictable when dribbling. Niles would be a better fit there.

But he tanks through the ranks

Except he gets in such good attacking positions that he finds himself free to get crosses into the box or atleast attempt to get them into the right decisions. Imagine if we said okay mate, forget about defending so much. He doesn’t have triple step overs if that’s what you mean, but he certainly gets behind the defence a hell of alot, even as an fullback.

Wasteful in possession yes. Nothing wrong with his end product when in counts. Would love to see what he can do with more freedom in the opposition half.

Agreed. He’s a give it all type of player. Doesn’t mind getting stuck in. I’d definitely try him out there.

A loan player who has experience to backup the development of the kids.

Fine but you know Real will be asking for a sizeable loan fee for a player in his prime years. He will be very close to an unsaleable 30 years old when we are done with him.

Forget it lads, we’ll most probably loan some unknown 30+ year olds and have Bellerin and Holding as LANS going into the new season.

This sadly kinda looks like an Emery type of deal and player, which is exactly why I don’t want him involved in recruitment.

I already had concerns when Ornstein mentioned he wanted both Nzonzi and that other 30 year old, and that was before we got Denis Suarez.

Emery just doesn’t seem to be a youth type of guy.

Spot on! Just look at Emery’s past, he mostly relied on experienced players for short- to middle-term success (i.e. winning the Europa League). He’s good at that, but he is the wrong guy for Project Youth.

Except last season Guendouzi got more minutes than almost every other player??

Without any reasonable return, yet he kept playing him over Willock and Smith-Rowe despite the fact that they had better numbers than him in lesser amount of games. The same Emery who thought Guendouzi is better than The Jeff. The same Emery who loaned out Calum Chambers to prioritise game time for Mustafi. The same Emery of Denis Suarez debacle. I do not trust that man with any meaningful transfer. When he is not getting the wrong sort of youngsters, he his busy ticking of his previous Spanish linked players that might not really be a good fit for the… Read more »

Erm, no he didn’t but yeah he was used a lot.
I think people misunderstand when I say a project youth; Douzi was used because though raw, can still provide a certain quality pretty much none of our other midfielders bar Torreira and (now gone) Ramsey.

It doesn’t change the fact he’s more of a short termisr, which isn’t a bad thing. It’s pragmatic.

But that may clash with a More long term project.

A P
Reply to  Drew

Emery got Guendouzi wrong as well.

Have seen him play enough times to realise he is not the answer to our problems,

5 goals and 4 assists last season is like signing another AI, no thanks they can keep him.

Modern football has evolved to a place where those playing in the attacking third have to contribute goals and assists or you have no chance.

Now just sit back and watch people going crazy over Vasquez as if they have watched him play all their lives.
He ‘Average’ at best.

I actually think he is a very good player.
You play 47 games a season for Real Madrid if you’re average.
He also played a lot as right back which goes some way to esplain his offensive stats.

He has hardly played at right back.
A handful of times at most.

But he is a defensive winger.
His primary job is to bring balance to the team, and chip in attack when possible.

A great squad player for Madrid, but not what Arsenal need (i.e. a starting winger)

I actually remember watching him play while Bale was on the bench (before Zidane quit) and thinking how average he is.

This is a non starter.

If not Zaha, get Fraser. Fraser＞＞Vasquez

I think Vasquez is not as bad as people view, although I haven’t seen too of much of Real Madrid playing, but whenever I saw, he would usually quite productive and useful creatively. Real fell apart against Ajax when they lost him and Vinicius, so I wouldn’t mind if manage to get him.

i would rather have arsene wenger on the wings than this guy , can’t dribble, can’t cross, can’t pass infact CAN’T should be his middle name. I wonder why we’re not being linked to ramsey replacements yet or we want to change our game style

He’s a decent player but my issue would be age. Preferably, we need someone 23-26yrs. Ziyech, Carrasco, Zaha, Fekir, Thauvin. Lozano, Neres, Everton slightly younger but very interesting prospects. There’s a lot of options so we need to be patient with this one but prepared to pay the 25-35m range. Likely we may see some reduction in asking price as our ‘competition’ fall away but you generally pay for what you get with creative players (unless the club does not want to sell as in the case of Zaha in which case its flogging a dead horse or your wasting… Read more »

I think if we finesse it and draw it out till some of the bigger players in market have satiated their needs (Spurs, Liverpool, United, Chelsea, city, Juve, Bayern, PSG, RM and Barca), we have opportunity to bargain down on price.

We know Chelsea have committed some money and are tied to a transfer ban now.

City have paid 62m + for Rodri next a Cback (Maguire maybe)

Greizzman to Barca? Hazard has gone to RM (hence surplus in their squad)

So things are beginning to move.

https://www.goal.com/en-us/news/how-arsenal-fooled-spurs-to-sign-ozil-and-fund-madrids-bale/111kdcqqvdxmh1qc7xq86q97ot Worth the read. Dispels the common myth that Arsene and Dick Law “panic buy”. Or before you lay in to Gazidis like the rest of the sheep, maybe you should have something called ‘an open mind”…not an empty one. The man who refuses to spend two quid over his evaluation of Luis Suarez panic buys? As I mentioned way back, this deal for Ozil was predicated on the Bale move. Interesting tid bits as to how Gazidis and Law had to maneuver to fool Levy into thinking nothing was going on. Clearly all the groundwork was laid before Wenger… Read more »

May be something brewing under the surface. We may have several targets (see the recent article on how we signed Ozil) If they need to sell or move on, a number of names will be on the list. Cebellos, Vasquez. BOTH players that we could well do with. Vasquez another in a wide range of wingers available in market we can go for beyond wasting our time with Palace and Zaha or over committing money there. Clearly many options equals propensity for a lower price particularly as the apex predators above us fall off. I don’t think its likely RM… Read more »

“…while Inter, Bayern and PSG are supposedly interested in the 28 year old as well.”

It would be ideal if the youngsters developed well and we kept them !

Not sure why some people think he is ‘average’

My only concern would be age but in terms of what we need , craft, guile, ability to find short spaces beat players one on one, no where near average to me.