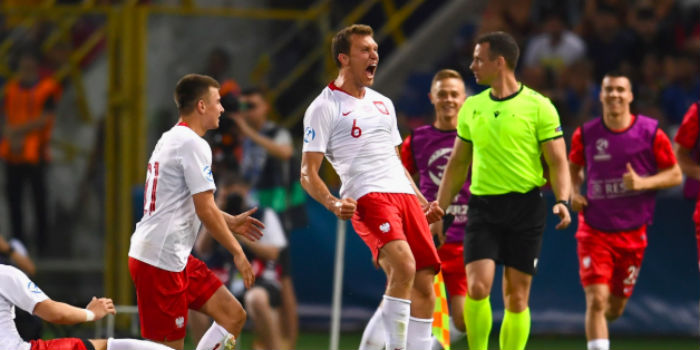 Krystian Bielik is hot property in the transfer market during an off-season where demand for outgoing Arsenal players have been scarce. Previous reports have suggested that Bielik would struggle to find a role under manager Unai Emery, with AC Milan looking to snap up the Polish U21 international on the cheap.

Today, the Telegraph claims that leading Championship teams such as West Bromwich Albion, Middlesbrough, Brentford and Derby County are keen to recruit the player for the 2019/20 season.

Bielik has 2 years left on his contract and might command a decent transfer fee considering his strong performances in League One and the recent European U21 Championships. There have also been rumours of Arsenal sanctioning another loan spell for him.

The Championship might, after all, be a natural progression for Bielik to gain experience away from the pressures of the Premier League after a solid season in the English third tier.

Head of Football, Raul Sanllehi, has publicly claimed that a player with 2 years left on his contract would be when the club makes a “difficult” decision on his future with Arsenal selling the player or extending the contract if they see a future with him.

Bielik’s next path in his career would be much clearer within the coming weeks.

Why would we announce we have no place for him….just makes our selling position weaker…..

We haven’t announced it..

We have given him a first team squad number like Reiss, so we have announced it in a way.

Extend and loan to a championship club not an option? If he’s willing to sign for one of them on a permanent for first team football surely he’ll be willing to go on loan. Eithet that or at least give him a chance in pre season.

Maul Person
Reply to  Ya gooner

He has stated categorically he won’t go on loan again. He wants a chance at first team football or be moves on. Do no extension either. After being at the club for 5 years and being on loan most of that, I don’t blame him.

On the contrary, he has said no such thing.
He’s said categorically that he won’t play U-23 football next season – that he will play first-team/senior football, whether at Arsenal or another club. Nowhere has he said he won’t countenance another loan.

The question is, is he better than mustafi? If he’s not, thrn loan mustafi to the championship instead!

Of course many Championship clubs afford his wages? Good business loaning him there and pay half his wages? Are you serious?

We should all be saying that Mustafi is a decent defender. Keep on saying he´s rubbish and no one will be interested.

That would work except Mustafi is on £100k a week and Bielik is around £15k, no club is dumb enough to pay him that are they?!?

Hopefully this is just an agent talking. Zero idea why we wouldn’t give him at least a pre-season chance after a successful loan + EUROs. Our current CBs are far from world beaters.

He’s not in the pre-season since he played the Euros.

We should get around £50 million from selling Bielik, Chambers, Mustafi, Elneny, Monreal/kolasinac, Jenkinson, making our budget £100 million pound. So
£8 mn for martinelli
£22 mn for the LB
£ 15 mn for a CB ( socrates cost around the same last year)
£ 40 mn for a winger ( zaha/ fraser)
£ 15mn for a central midfielder ( lemina? )

If only transfer in football is as easy as math.

Amazed we don’t have a place for him. Song and Coquelin did decently enough through this route.

If we’re going to stock up on 28-35 year olds, we’d better be pushing for the league. If we’re getting mediocre outside players to tread water, why?

A permanent move to the Championship would be a huge risk for him, I’d say he’d be better off fighting for his place here if he has the option

Exactly — he’s done everything we’ve asked of him, very well. He’s proven himself at two positions on loan and with his youth national team. Give the guy a chance — he can play two positions, well!

Mustafi is Mustafi and Koscielny is on strike. The club has fuck all chance of sorting out the defence so there is plenty of room.

I hope Bielik doesn’t leave, but the quality of clubs who are looking to sign him for their first XI should be a reality check for those claiming we should se half our defence to play him

I think it’s stupid not to use him, but if we’re not going to to, sell him for a big fee now. Should be able to get at least 15 million given his home-grown status. Sending him on loan for a year makes zero sense when he has two years left on his contract. His value is relatively high right now having impressed in an international competition. Whatever modest value increase he might get from a successful loan spell is never going to outweigh the loss in value caused by letting him get down to a year on his contract.… Read more »

I think Emery has to have a serious look at Beilik AND Chambers this pre-season. Seems premature to send them out just yet so hopefully this is just lining the ducks up just in case. Rather we promote Bielik into first team at Cback (and to cover DM) then waste (massive amount eventually)money on Saliba (with complications to resale should he not prove the hype…which is likely) BUT even so we will need a more experience and accomplish Cback to come in with Sokratis and Holding. if Beilik can do the job as fourth choice pushing third/second, more than happy… Read more »

Emery and the others need to make a decision about Bielik asap or we’ll have another disgruntled player on our hands. He’s certainly got “potential” (but so did Chambers, and we’re looking to offload him after an underwhelming career, for a number of reasons, with Arsenal). We need to give players like Bielik a chance or let them go (before their contacts run down – no more of the Wenger-era nonsense). While I don’t think we’d get a fortune for him – around £10 million probably – if he’s not wanted we certainly want/need additional funds for transfers. So, it’s… Read more »

Is he not the good, home-grown talent?