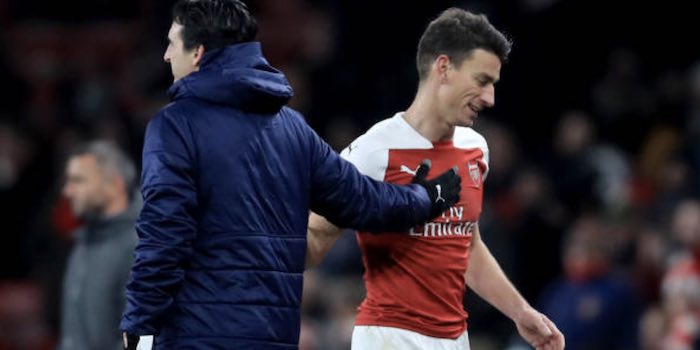 According to L’Equipe, Laurent Koscielny is attracting interest from Ligue 1 side Bordeaux.

Our 33-year-old captain has one year left on his contract at the Emirates and it’s currently unclear whether he’s viewed as dispensable or not by the football operations team.

Sport Witness translate that an approach for Kos is spurred by a desire to replace Jules Koundé, a 20-year-old hot prospect who is moving to Sevilla. Clubs in Turkey and German giants Borussia Dortmund have also sniffed around this summer.

On the one hand, we could still command a half-decent transfer fee for Koscielny – that’s if we ignore reports that he’s asking us to release him for free a year early – and we know he weighed up leaving last year.

On the other, he proved he can still handle the rigours of top-level football after a very impressive comeback from a career-threatening achilles injury.

For what it’s worth, we think it would be foolish to sacrifice his experience for a few quid in the bank, especially given the lack of clarity over the future of our other defenders and our struggles to recruit.

No. Just simply no. He’s our only true leader and anchor in defense at Arsenal.

Don’t be clouded by sentiment.

He has been slower in recent season and wear and tear issues will mean he will be less and less available for us.

Again, people like to blame Mustafi (rightly so maybe at Palace) but our defensive pair of Sokratis/Koscielny in following game at Wolves shipped 3 goals.

We signed this man in 2010 and he’s still our best defender. Should’ve won at least one Premier League title but we never put a proper defensive midfield unit ahead of him.

Time to move on from Lolo. Another Premier League season won’t do him any favours.

Don’t love this, but I suppose you’re dead right.

Helluva player, Boss-cielny! Will miss him if he goes. Nothing but the best wishes for the man. Class.

Would be really sad to see him leave. We need some players that understand what it means to represent arsenal especially after losing rambo.

Wenger would have taken all the bullets for these kind of transfers before.

Why are Tierney, Saliba deals hanging still. If they are the top targets why are we letting other clubs a chance to come in?

Zaha bid? What next!

There’s no direction to our strategy. We seem to be grasping at straws in the wind. 1) Tierney. We don’t need to worry about this area just yet. We have to add a Cback, Winger and CM with only 40m plus hopefully another 20-25m if we can sell. 2) Saliba – Again we don’t have money to spend and then rent out. We need a capable Cback so this seems equally daft. 3) Zaha – in a market with so many options (Ziyech, Carrasco, Everton, NEres, Thauvin, Fekir, Pepe) we seem unable to play off the sellers and instead prefer… Read more »

…and the bigger problem is with Mslintat out of the way (not that he was that good either), we now have Raul dictating things and I’d be wary of his experience as “director of Football relations’ at Barca.

Best years are behind him. We can’t be moaning about how we conducted biz in the past and allow an ageing injury devastated player run down his contract. We need to look forward and be realistic about our position.
I love Kos the boss, but it’s time to let go. All players with one year left on their contract with no intention of renewing should be sold if buyers are available.

While I fully agree, I can not fathom why we get so mad when players leave us early. If we can not be loyal to them when they need it the most, why do we get angry when they refuse to be loyal to us when we need them the most?

Farewell Kos, he was brilliant always. Would have loved to have him for another year but it does not make sense financially and for the squad. All the best to him.

Too many people are clouded by sentiment.

Which is why they have an over estimation of Jenkinson.

Koscielny has been great for us but his prime is clearly some time back.

OTOH whether we reinforce with the right new Cback remains to be seen.

We need experience back there not some teenager to be loaned back to St Ettienne that will take up a substantial part of our summer budget.

That wouldn’t be particularly wise.

I’d imagine the clubs bean counters will be looking at his wages vs potential availability, would be surprised to see him still here by the end of the summer sadly

I know this is going to get down voted to bits, I know he’s a decent defender, But he’s not a leader, and he’s been part of a shite defensive unit for years, we should aim for better, he’s the best of a bad bunch, i have no ill will towards him, but we as club can do better, he wants to leave, leave then. We cant keep complaining about letting players run down contracts and not getting good money for players, if when the chance comes we get soppy and keep a 33 year old, injury prone defender who… Read more »

He was mainstay in the world champion French side until injury. I think “best of a bad bunch” is recency bias. It was only a few years ago Kos and Per were the most solid central defensive pairing in the PL.

I think that’s pushing it a bit to be fair

Time to go. He hasn’t been that solid for us. People like to criticise Mustafi but following match against Wolves, Koscielny and Sokratis were in the ‘preferred’ back 4 duo and we slipped 3 goals. Ditto against Chelsea. Instead these same people will then shift the blame elsewhere to say granit (another popoular scapegoat) or Ozil…ignoring of course Torreira was fundamentally responsible for at least one of those goals against in the finals. Koscielny started off his career in poor fashion for us but than came into it second season. He’s been a stalwart but at 33yrs with too much… Read more »

Until we add more defenders who can fill the void, letting him leave seems ridiculous.
That we can’t give someone who has been a faithful servant to the club and a strong performer the proper end to his career (by allowing him a few more years of play in France) is testament to the weakness of our transfer team and financial situation (both of which I would argue are self-inflicted problems).

Vermaelen is available on a free at the mo…. Bordeaux could reunite the most injury prone CB pairing of recent years. If they could somehow keep them both fit then what a pairing for League 1!

He’s done so much for the club just let him go. He’s earned it

Kos has given everything for us and I would love to see him stay, but if he feels it’s time to leave and move home to France then I think he has earned that right. Whatever happens this season, for me he will always have a special place at Arsenal.