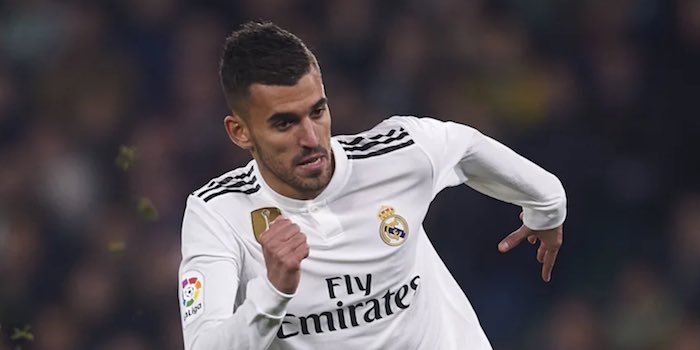 Over the last few weeks there have been a number of reports linking Arsenal with a loan move for Real Madrid’s Dani Ceballos.

The central midfielder is currently away with Spain at the European U21 Championships, but given the transfer business done by the Bernebeu giants, he is apparently not in Zinedine Zidane’s plans for next season.

However, they don’t want to sell him just yet, so see a loan move as an ideal solution for the upcoming campaign.

Cope.es say that he is of interest to both Arsenal and Sp*rs, while Marca suggest Liverpool are keeping tabs on 22 year old also.

Given our financial situation, and the very real need to bring in a central midfielder following the departure of Aaron Ramsey – not to mention the fact that three of our four senior players in that position have been away on summer international duty, Ceballos on loan would make some sense.

It fills the squad without having to pay a huge transfer fee – although a loan fee would apply (Denis Suarez cost £3.5m for his 6 month spell on the sidelines) – and should it work out we could potentially negotiate a permanent deal next year.

It will be interesting to see if Arsenal do use the loan market to bolster the squad this summer. If the reports of an increased deal for Wilfried Zaha are correct, that will further eat into our budget, so there won’t be much money to splash around on other positions which really have to be addressed before the season starts.

This might well be one to keep an eye on.

Arteta: Ceballos has made a big step forward

As the days go by, our lack of defensive reinforcements is scaring us

We haven’t been even linked with anyone who can come in and play straight away bar Tierney.

Optimist in me thinks it’s a good thing. We can’t go in to an open bidding war with any of the top club, so keeping things close to our chest might be the right strategy.

That’s an optimist in me talking ofc.

When it comes to all things Arsenal, I feel obliged to kill your optimism right away. DIEEEE!!!

My optimism is long gone

This would be the signing that would get me as excited as ever. This kid is pure gem. I wonder if we can get him in a cheap deal with Madrid having a low buy back clause.

This is interesting. Why not? We don’t have the budget currently for whatever reason. 40m is not much to work with when you consider Spurs laid down 52.3m for Ndombele and City just spent 62m+ for Rodri. If we should go for quantity over quality trying (as some would suggest) to reinforce all over the place, we will be further behind against even mid table teams these days. Quality is what we need and we need first and foremost Cback and Winger (even with Reiss) We roughly know going price for winger (and there are many options beyond Zaha) is… Read more »

Your buddy mustafi is still here. Arent you happy?

A creative midfielder who can dribble. Precisely what we need. Plus he can play left wing.

You know when visiting teams substitute on some journeyman player and the Emirates crowd shouts in unison ‘Who?!’ (before he goes on to score the winner)?

That could be us responding to the announcement of the Arsenal starting eleven next season.

I still think we should’ve bought suarez and sent him to Juve instead of Rambo.
But yeah, it seems we are in the “we poor so loan some average bloke and hope he can contribute so someane else makes a profit” league now.

Kovacic worked out well for Chelsea. In the end with their interest, he was priced too high. Suarez seemed short on confidence when he came to us and a player afraid of making mistakes and playing with proverbial hand brakes as a result. Hopefully Ceballos fresh from involvement in the U21 will bring something energy-wise and in terms of technical ability which we lack in the middle of the park. If we can structure an option to buy, its good potential as well should he kick on with us. At 22yrs, he has plenty of upside. Another player who may… Read more »

I like theBakoyoko insinuation. Such steel is required in our squad esp midfield

Looking good in Ligue 1 and Serie A doesn’t always mean someone has the right attributes to do well in the Premier League (Gervinho for example looked great at Lille and has been quite decent at Roma, now Parma).
A lot of players who are good in Italy in particular tend to struggle here because the style of play is radically different. France is a more mixed bag of course.

Bakayoko struggled at Chelsea and I think we’re best staying away from him.

Kovacic looks a really good player, but like a lot of players, he took a while to settle into the intensity of the premier league.

Loaning a 22yr Old from La Liga, will likely take an adjustment period, so unless there’s a firm option to make the transfer permanent? Then I’d prefer to give Willock or Smith-Rowe an opportunity, there’s no value in educating a player for someone else.

There’s talk of Madrid wanting €50 million next summer, with a full obligation to buy, but apparently we want an option to buy at a fixed price.

For the love of God, don’t let Totteringham get this guy. Even if he is crap, which I’m sure he isn’t, we must snatch him from under their noses.

I would rather we develop our own players.

I’m kind of wondering if we might loan a centre back this season if we do, eventually, buy Saliba and have to loan him back to St etienne. Perhaps that could help offset the fact we don’t have him for this season but not leave us left with another player we don’t want in the longer term

This kid was dynamite at the u21 Euros. If not player of the tourney then not far off. Would be a superb signing and hopefully we can agree a reasonable fee to buy after the loan expires. Genuine world class potential.

Good player. Take him on loan, take him on anything…just get it done.

Why not pay the loan fee, then loan him out to a lower table side to get him some experience and see how he develops? Plan for the future.

I’m probably gonna get loads of thumbs down for saying this,, but the way I look at a game of football if you don’t concede goals you don’t lose the match, i no football has to be exciting now days but give me George Graham’s back five anyday, why are we not looking at defenders, I no we got holding but he’s gonna take half a season to get at his best, other than him we aint got any good enough defenders at all

You could be a mourinho disciple with that thinking. I prefer the “as long as you have one more goal than your opponent you win the game”. But i get your point, we dont score 7 goals a game to make up for the defence.

Both would be nice

This would be admirably affordable and – as long as he stays fitter than Suarez – a good move.

Not convinced this is much use, loan fees and high wages vs giving Chris Willock a shot seems silly. Especially as maitland Niles really needs to be playing centrally

It’s funny how Raul said thy had a plan and targets already?
Seems like the old guard already; just winging it to see who’s available.

Wenger did it and now Emery, every bloody position but defence, we need at least one more good player in every position across the back line. Joe Montemurro with his Women’s team has just won the WSL and he has a team that can beat all, first thing he did when he took over was bring in players to improve and settle the defence. Why is it so difficult for Emery to do the same instead of blowing all the budget on Zaha?

Not related to this article, but what do you guys think of our “future” head of recruitment Francis Cagiggao?
Is he good?
I heard that he was Wenger’s right hand man and responsible for signing (probably just suggesting) Fabregas, Bellerin, Cazorla, Sanchez and was on the verge of signing Messi, Pique.

I expect to see more “Guendozi type” signings in this summer when that m*ron Kroenke doesn’t give a sh*t about Arsenal. But from what i see, Martinelli has been the only one.

Beware, Onion Knight, the Arsenal is dark and full of terrors.

we can get De Ligt for 67 millions, but yet the rumours are we’re offering 70 milloins for Saha.

De Ligt is both younger, has proven his worth in CL and he’s actually playing in central defence.

Would love to have him, but I can’t imagine that De Ligt would join us given the range of clubs available to him. Unless he is a boyhood Arsenal fan and idealist, but I haven’t read that he is.

How is Zaha valued at 80m and a proven world-class striker in his prime was valued at 56m?

Age and sell on value, and Zaha is somewhat proven in the PL.
Zaha at 26 could play somewhere for 3 years and still have high resale value.

Aubamayang’s value will be less at the end of his gunners contract due to age.

I think he also counts as a homegrown player.

He’s an ultra nationalist and all round scumbag – thinks “Catalan and Basque dogs” should be bombed, makes Pro Franco and misogynist tweets. Also acts like a total Neymar on the pitch.

Fuck him. I don’t care how good he is, I’d rather be able to like Arsenal footballers first and foremost.

Is this true? Not a one-off dumb statement, but a real thing? If so, I agree with you.

Is he injured? If no then i give a 10 on poo meter

Would be an interesting transfer should it happen. He’s a fine player. The worry is if Real have stalled his progress like Barca did with Denis Suarez and we end up with someone shot of confidence. The good thing is he’s still young enough to be able to move forward. Given we’re short on cash a loan might be the only option and I can’t think of too many other quality options for this scenario. In other news, Chelsea have done exactly what we all wanted them to do; sell their best player during a transfer ban and appoint an… Read more »

the worst ‘highlights’ of career I have ever seen, if you were to put Mustafi’s against his we would give our prolific mad max dive in for know reason a pay rise, he looks awful, he was getting out muscled in the Spanish league! this guy would seriously never cut it in EPL, haven’t we learnt anything? because you play for a Real Madrid or a Barcelona it doesn’t mean you are a top player, they pick these types up from your malagas sporting gijon to give them a go for 2 seasons on potential level then sell on their… Read more »

Let’s give chance to our very own academy talents who have proved in premier2, the likes of willock, nelson. I hope to see a new arsenal, rejuvenated, strong and the 2019/20 champions. It’s possible guys!!!!