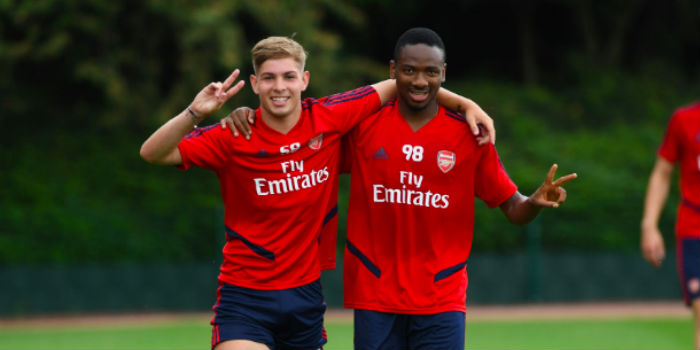 Emile Smith Rowe has joined Eddie Nketiah, Joe Willock and Reiss Nelson in the Arsenal first team and has been given a new squad number.

The 18-year-old came to prominence 12 months ago with a cracking goal against Atletico Madrid in a pre-season friendly and went on to play six times for the first team in the Europa League and Carabao Cup.

A groin strain suffered at the start of December kept him sidelined until the end of February but it didn’t stop him moving to Bundesliga side RB Leipzig in January.

In the end, his time in Germany was more of a growing experience than a football one, with game time limited to just three cameo performances at the tail-end of the season.

Leipzig liked what they saw and did attempt to keep Smith Rowe, but the Gunners were never likely to agree to that. If he can stay fit, he potentially has a big year ahead of him.

Smith Rowe has been wearing the number 58 shirt at training this week – last season he had 55 – but Preciana Brown (always good for a bit of Arsenal news) insists that he’s in line for the 32 shirt.

That would be Joe, not Chris. Unless you’re saying we should re-sign him?!

Did he go to Benfica? never to be heard of again, unless someone tells us different. What happened to the other Bro at Man U?

Yeah he joined Benfica B two years ago. Apparently he hoped he’d be promoted to their first team for last season, but it didnt happen. I’ve not been following how he’s been doing with the B team.

Was a brave move to quit a Premier League club to go overaeas at his age and I respect it. I bet he took a salary cut.

But I wonder if he wouldnt have done better developing at our U23s with a few senior cup games, instead of playing Portuguese second tier for two years.

I read a Portuguese article about him last week that said he’s looking for a move to the Champo to try and revive his career. Link: https://www.abola.pt/Nnh/Noticias/Ver/788098

I always kind of assumed he was loaned out to RBL last season in preparation to go there for the full year this time. I wonder if they’re yet to officially give him a number because they’re waiting to see if a loan move comes through

Yes! Arsenal showing good sense.
ESR can be the breakout player the club need this season.

I hope so but please have patience

Add Bielik to that list pleeeeaase.
I am yet to get over the grief of losing Gnabry.
I have a feeling that guy will be a star in the near future.

I agree with you ?%, Krystian Bielik is highly talented and ready for Arsenal’s first team. He is a class talent, tall, strong, very good passer of the ball and now a more mature player. I suggest arsenal should sell Elneny and promote Krystian Bielik to replace him.
Smith Rowe is definitely my only candidate in the reserve to gradually replace Özil this season.

Yes!! Bring all of them in. We need players who have a point to prove, players who are hungry and would run their socks off for the manager. A look at our team and you find too many players in comfort zones( Ozil,Micki,mustafi,Granit,Elneny,etc)

Seems a little unfair on Elneny

This crop of young players coming through have the level of honours the Spanish, Italians and French did before they came to become 100 mil players across the continent. These kids are intelligent, explosive and full of talent, lets get them 100 caps in all comps as soon as is acceptably possible and go from there. Willock is better than Elneny. ESR is the same age as when Ramsey joined and showing the ability to perform in his role. Nketiah is the countries future striker if you consider his youth stats. Niles has filled in at positions against top opposition… Read more »

ESR– not just the possible ability of AR– but the same knack of popping up in goal-scoring positions.

Whenever smith rowe and willock played last season they scored or had a big impact on the game.

Hudson-Odoi is a pretty good player

Meh, he’s alright. Santhi is better but Foden is probably the gem right there and he’s hiding his time learning from Pep.

That’s the kind of talent which would excite people. Let’s not kid ourselves with ESR or Willock, they sure are good players to have around but excite you when you watch, hell NO. I am being honest here, probably a bit too much for my own good.

Sancho and not Santhi, what a weird autocorrect

And not hiding, I obviously meant biding.

This is good news. Whether Ozil or Mhkitaryan go, we should be pushing Smith-Rowe for the future and he can start making an impact now. If one of the more senior playmakers as mentioned eventually gets sold, we have enough back up with Smith-Rowe. Preferably who we can bring in at CM or out wide on the wing also has a function through the middle. If we play a -4-2-3-1, it will dictate more involvement on Ozil (or Mhki) or Smith-Rowe. If we play 4-3-3, we have more flexibility if we add sufficient wide options beyond just Iwobi last season.… Read more »

I really hope he gets a run in Premier League. Looks really good on the pitch in way he attacks space. We miss that in midfield and even wings.

Smith Rowe has it all except age and experience. Will all hope that this coming season will fill in those blanks. Young players make mistakes and require patience the one thing the premiership has little of. The press make a mountain out of any slip up claiming they are not ready or over their head. Every player goes trough this and I would rather let the young guns iron out their wrinkles than watch “seasoned” players make rookie mistakes or play like they don’t give a shit.
Bring on the kids!