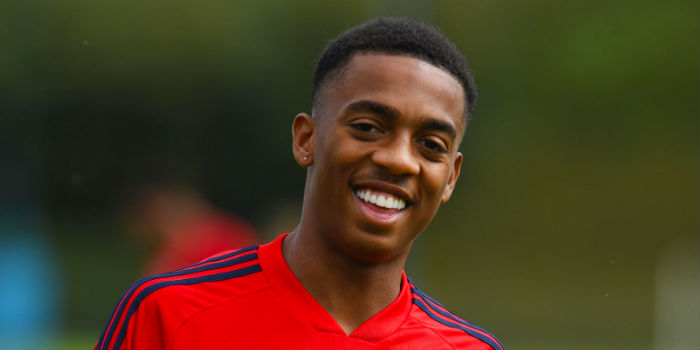 Our resident Arsenal youth expert, Jeorge Bird, has confirmed that Joe Willock has been promoted to the Arsenal first team and been given a new squad number

After making 11 appearances in the 2017/18 season, the 19-year-old scored three goals in six first-team games last campaign and even had a cameo in the dying stages of the Europa League final when he replaced Mesut Ozil.

In the absence of Aaron Ramsey, we’re begging for someone to make those darting runs behind the defence that the Welshman specialised in. Obviously, those are big boots to fill, but Willock does seem to have an eye for goal and the attention of the coaching staff.

Having watched Matteo Guendouzi stake his claim to a regular starting position during pre-season last year, Willock must recognise that a strong showing in the coming weeks could lead to a similar opportunity.

The England under-20 international wore number 59 when he came on in Baku. This week he’s been training with number 28, a number previously worn by Lucas Perez, Joel Campbell, Kieran Gibbs and Kolo Toure.

UPDATE – it looks as though Eddie Nketiah has also been promoted. The 20-year-old, who has been linked with a loan move but insists he wants to stick around at Arsenal, has been spotted in the number 30 shirt. Last year he wore 49. Presumably, the club will announce these changes in due course.

Willock: ‘Vocal’ Chambers one of four Gunners to help me settle

Delighted for him, thought he looked excellent after coming on in the Europa Final,

Thrilled for him!!! I wonder who will be wearing the no.8 next season…

Leno me, I’ll be your friend
Reply to  Darren

I know a little box of chocolates who are after eight.

#8 shirt is for Zaha bro

How’s that cursed no.9 working on Lacca?

Squad number posts are why I come here

Not even the thrill of reading the name Robert Pires somewhere on the blog? ? I’ll get my coat

Reiss just posted a pic of his slippers on instagram, with #24 on them.

Leno me, I’ll be your friend
Reply to  Bendtnerschristmastree

Were the slippers from Europe or the UK? They must be either the tiniest feet ever… or clown shoes.

It Is What It Is
Reply to  Leno me, I’ll be your friend

I remember back when he and the Jeff were featuring in cup games. They both looked so composed in midfield. I thought at the time that the Jeff looked the better of the two, but both were impressive. Shame we lost Jeff Reine-Adelaide, but glad we still have Willock

If Willock has been promoted to the first team squad, then I’m happy for him and the team.

But I don’t think Guendouzi “staked his claim to a regular starting position during pre-season last year”. I suspect he was already assured of that by Unai, as part of the deal that brought him to Arsenal in the first place.

Let’s hope they both go on to have a very strong season for the Arsenal.

Except he played really well in pre-season and declined to join the French squad to get minutes. Obviously, being nineteen and having made all of 30 appearances for Lorient, he was clearly in a position to demand first-team football at Arsenal. FFS

Guendouzi really stood out. He’s way ahead on the development curve. Willock has been decent. Shows audacity but some issues still to iron out (as Guendouzi too) Regardless, we do ourselves no favours not adding one more experienced player in the middle for next season. If we don’t find a Cebellos on loan then maybe we should keep an eye on Khedira or Matuidi at Juventus as a short term stop gap. Better that than rushing into a purchase on a player that does not quite measure up to the quality we were looking for in market this summer IMO.… Read more »

Khedira? Where are we? 2007?
No more stop gaps thanks. Neither Denis Suarez nor Litchsteiner worked.

He’s still very young. Has plenty of benefit and potential at Arsenal.

Whether he gets enough playing time is the issue.

This has been a problem for us in general, getting the balance right between exposure of younger players and too much exposure at our expense.

One potential is of course to send out on strong loan to shape the player better and critically afford them a good number of games to make mistakes and learn..but not at our expense.

For a guy that posts so much about how he would run the squad, you seem to have no clue about squad issues?

Great stuff. Is Nelson already a part of the squad?

Martinez or Iliev or Macey? 3 keepers all close in age and good competition for second keeper jersey.

Would depend on who impresses in pre-season and of course who can fetch the best interest in market.

Ive seen Emi in squad pictures the last days.
Not Calum tho, as far as I can remember.

Those photos were taken tail end of last season when both were out on loan, more for the new kit than anything else.

Ah is that how it is? Good to know! If we end up selling Chambers and keeping Mustafi the rage might actually kill me this time.

I’ve seen murmurings of Reiss Nelson getting the 24 shirt. Hoping the club move swiftly so I can buy the shirt!

Rather have Willock from the bench than Elneny.

Not good enough though.

Not good enough to star? To start? For depth? For cups?

Surely you can’t think that given our performances and finances and our competition that we are still a plum destination? In the new order our pedigree means less and less. We need to grow from within with players who want to bring the club back, and add stars that make those around them better. See: Van Dyck, Virgil.