THE LOWDOWN
Arsenal play Barcelona in their third pre-season friendly of the summer, following defeats to Frauen Bundesliga sides Bayern Munich and Wolfsburg. The Frauen Bundesliga begins three weeks before the WSL, so Joe Montemurro will be relaxed about defeats to teams who are a few weeks ahead in their preparations.

Barcelona, however, begin their domestic season on the same weekend as the Gunners, who now have all of their players back after the summer’s World Cup exertions. This match will be a much better indication of where Joe Montemurro’s side stand as they plot their WSL title defence and a first Champions League campaign in over five years.

As Champions League runners-up, Barcelona provide the Gunners with the stiff, continental opposition they want as they plan for a European campaign. The match also marks a return to Meadow Park for Arsenal, who played Bayern Munich at Emirates Stadium as part of the Emirates Cup, before flying off to the Austrian mountains to play Wolfsburg.

The #Arsenal in @adidas Red and White. ?⚪️?
.
.
.@ArsenalWFC pic.twitter.com/4bdyQuC8Rp

TEAM NEWS
All of Arsenal’s World Cup stars are available and have returned to full training. Vivianne Miedema was not deemed ready to start in the 3-0 defeat to Wolfsburg last week but could do on this occasion. Arsenal have been dealt a huge blow with the news that Danielle Carter ruptured her anterior cruciate ligament again in the Bayern Munich game.

A million and one things have been running through my mind since that day. Still, I can’t put into words how I feel ?

Thank you for all the well wishes, I appreciate them all! ?? pic.twitter.com/8PZBaxfPkj

It’s the same knee Carter injured in May 2018 and she faces another spell of roughly 9 months on the sidelines. In better news, Jordan Nobbs is close to a return and took part in the pre-match warm-up against Wolfsburg, there is some chance that she could form part of the squad for this game. Pauline Peyraud-Magnin, Leonie Maier and Tabea Kemme should be part of the squad having been rested against Wolfsburg. Lia Wälti is running again and hopes to be back in action in the autumn after a knee injury.

LAST TIME OUT
The teams met in the Champions League in 2012 with the Gunners running out 7-0 winners on aggregate. Goals from Jordan Nobbs, Jen Beattie and Katie Chapman gave the Gunners a healthy 3-0 away leg victory, before administering a 4-0 second leg beating to the Spanish side at Boreham Wood in the second leg. Jen Beattie scored a hat-trick in that one, with Kim Little adding to the score.

Champions League games at Meadow Park were played on weekday afternoons at the time because the floodlights did not meet UEFA requirements. That will not be the case this year with the improvements made to the ground, including the newly built North Stand which Arsenal will play in front of for the first time on Wednesday.

PLAYER TO WATCH
Leah Williamson started the Wolfsburg game in a defensive midfield role. It is a role Leah has played many times before, but not since Joe Montemurro arrived at the club. The Australian immediately insisted on playing Williamson at centre-half, insisting she would become one of the world’s finest defenders.

The loss of Dominique Bloodworth to Wolfsburg and injury to Lia Wälti have left Arsenal light of genuine defensive midfield players. Jen Beattie AND Viki Schnaderbeck can also play there, while right-back Leonie Maier spent the last 20 minutes of the Bayern game in the role. It will be interesting to see whether Joe persists with Leah in a midfield role.

Having bought Janni Arnth in in January and Jen Beattie over the summer, there is more depth at centre-half. I imagine Leah will return to defence soon enough and that Joe may even dip back into the market to reinforce the defensive midfield position. 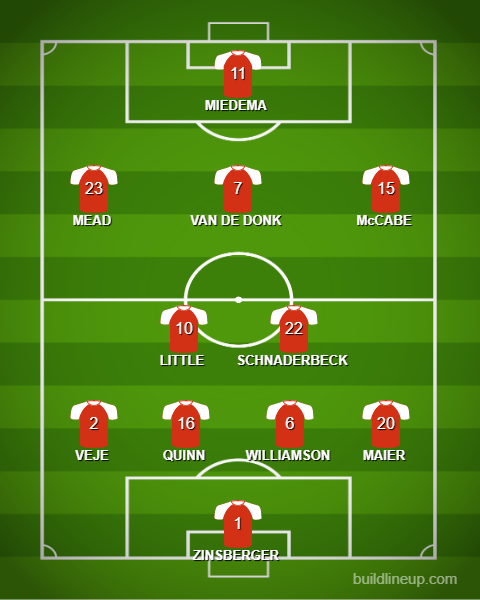 THE OPPOSITION
Barcelona are a rising power in women’s football, as evidenced by their run to the Champions League final last season. They have lost Toni Duggan to Atletico Madrid and Andressa Alves to Roma this summer but have added Wolfsburg’s Danish wide forward Caroline Graham Hansen and Spanish striker Jeni Hermoso.

Vicky Losada and Emma Byrne talking about how Barça Femení has developed since their first UWCL games vs. Arsenal in 2012. https://t.co/GpyS2Sg8hl

Barcelona also boast former Gunners Vicky Losada and Asisat Oshoala, both of whom started Arsenal’s 2016 FA Cup Final win over Chelsea at Wembley. Barca will be without Dutch international winger Lieke Martens who has been carrying an injury since the World Cup. Jeni Hermoso is also a doubt.

HOW TO CATCH THE GAME
The game takes place at Meadow Park on Wednesday evening at 7.30pm, there should be a small number of tickets available on the door. The match will not be screened live, so follow @arsenalwfc for live updates.

COMING UP
We will have exclusive match reaction from a player after the game. We will also have a full match preview and exclusive reaction to the Spurs friendly on 25th August. Pippa and I will be back with a season preview podcast at the end of the month, but in the meantime, why not check out our interview with Danish duo Janni Arnth and Katrine Veje on adjusting to life in England and at Arsenal.

Isn’t McCabe left-footed, or am I wrong? I’d think that Evans would start at right wing, where she was quite effective last season. Can you imagine if this team had kept Oshoala and started the trio of her, Miedema and Mead up front? Oddly, Oshoala wasn’t even a first-choice selection in most matches last year for Barca, the coach preferring Duggan (who wasn’t extended, I don’t think, and is now with Atletico Madrid). That struck me as an unwise decision by the Barcelona coach. Arsenal need to get Walti and Nobbs healthy and back on the field. I think the… Read more »

McCabe is left footed, but often plays on the right as an inverted winger. But yes, just as likely Lisa starts there on Wednesday night. Dom left for Wolfsburg largely because they’re better and she was playing mostly in defence at Arsenal and she prefers midfield and Lia Walti will always get that spot ahead of her.

I don’t believe it had anything to do with money but it was more to do with being able to play in her preferred position and the cultural difference between Holland and Germany being much narrower than Holland to England.
What about if the Champions League final this season is Gunners vs Wolfsburg and we win?
No, that’s just being unkind to Dom who was a great servant to Arsenal during her time here!

I also wish people would stop expecting the girls to get to a champions league final after being out of it as a club for some years plus with the injury record, the vast experience of teams like Lyon Wolfsburg Bayern and even Psg have from being in it year on year navigating the midweek traveling and still winning and it being Joe’s first champions league campaign i see us as nothing but outsiders

Good point. Priority for us is retaining our league title – a decent run in the CL would a be a bonus.

Also worth remembering we’ll almost certainly be unseeded for the round of 32 draw. We could get Lyon or Wolfsburg straight away.

Sure, but we need to have a positive mental attitude. If we go into the competition thinking we will be eliminated early doors that’s what is likely to happen. The squad is much higher quality and stronger all around than it has been in recent seasons. They are all experienced professional players and there is no reason why it is not possible to beat any of the other teams in this competition over two legs. Our role as fans must be to support the team and encourage them to performances worthy of winning each game as it comes along but… Read more »

Beth Mead and Katie McCabe will swap around at various points during the game, I reckon. They can both play either side.

Will the Champions League games be streaming anywhere? Would love to watch them in the States… fingers crossed ??

Usually these are streamed on YouTube, but it can depend on which country the game is happening in.

Lifelong Arsenal fan but, to my shame, tonight’s game will be my first seeing AWFC. Got hooked on women’s football during World Cup this summer and, on back of that, have got myself a membership for AW this term.

None of my mates go to see the women, so going on my own… any advice on best way to meet some good people to follow AW alongside this season at Meadow Park?

Yup, the supporters club always sit in the stand behind the dugouts, close to the tunnel area. The same people tend to sit / stand there every week too.

Thanks Tim – sat in completely the wrong place tonight but see where you mean… will head that way once the season starts!