THE LOWDOWN
Arsenal Women play their final pre-season friendly at home to Tottenham on Sunday as both sides prepare for the WSL opening weekend on September 8th. Arsenal begin their title defence at home to West Ham United at Meadow Park, whom they defeated 2-0 in a behind closed doors match at London Colney last weekend.

Newly promoted Spurs meanwhile, take on Chelsea at Stamford Bridge for their WSL opener. This is very far from the Tottenham side that the Gunners thrashed 10-0 in the FA Cup in 2017. They won promotion from the Women’s Championship last season and have since added players like Becky Spencer, Gemma Davison, Kit Graham and Lucy Quinn to their ranks to prepare for life in the top flight.

The first half of Arsenal’s pre-season preparation was focused on Champions League preparation as Montemurro’s side fell to defeats against Bayern Munich, Wolfsburg and Barcelona. Ending pre-season with friendlies against West Ham and Spurs is designed to ready the squad for the defence of their WSL title.

Arsenal have added four players with a strong claim to a starting place and, as Danielle van de Donk told Arseblog News after the disappointing 5-2 defeat to Barcelona last week, it will take some time for the chemistry in the Gunners team to reset.

Injuries meant Montemurro’s starting XI was set in stone for the majority of the last campaign and that chemistry clearly helped the side as they strolled to the league title. With the Champions League on the horizon, however, the squad needed to grow and with that, the challenge of integrating new talent will be one of the primary aims of Arsenal’s pre-season.

TEAM NEWS
Arsenal were buoyed by the sight of Jordan Nobbs on the pitch for the first time in 9 months during the behind closed doors match against West Ham. This was Nobbs’ first appearance since rupturing her cruciate ligament last November. She is in line to be part of the squad again against Tottenham but is very unlikely to start.

WHAT A SIGHT ?@JordanNobbs8 back on the field in a behind-closed-doors friendly yesterday ?

Elsewhere, Danish defender Janni Arnth has left for Fiorentina. Danielle Carter is recovering from a second cruciate ligament tear in 15 months and will miss the majority of the season, while Lia Wälti continues her recovery from a knee injury and looks set to return in the autumn. Pauline Peyraud-Magnin and Tabea Kemme have minor knocks and will be assessed ahead of this game.

LAST TIME OUT
The Gunners drew Spurs in the 5th Round of the FA Cup in March 2017 and humiliated their neighbours by getting into double figures. Danielle van de Donk scored a hat-trick, Dan Carter grabbed a brace, with Beth Mead, Chloe Kelly, Kim Little, Katie McCabe and Dominique Bloodworth (then Janssen) scored a goal apiece. Heather O’Reilly made her Gunners debut in this match, which also represented Kim Little’s second debut after rejoining the club from Seattle Reign.

PLAYER TO WATCH
With so many players at the World Cup, for different durations and with various levels of involvement, it stands to reason that the squad has been a mixed bag in terms of sharpness this summer. One player who has immediately returned at a high level is captain Kim Little. Kim was probably Arsenal’s best player in a midfield double pivot against Bayern at Emirates Stadium.

In subsequent games, she has started slightly higher up in her favoured number 10 position. With Danielle van de Donk, Jill Roord and Jordan Nobbs on board, there is a lot of competition in the attacking midfield slots, but Kim has made an excellent case to play in one of them, even if she is adept in a deeper, more creative role.

Kim Little signed a new contract with Arsenal yesterday. She’s won 5 league titles, 3 FA Cups and 4 League Cups at the club and is one of Arsenal Women’s greatest ever players. Here are 5 of her greatest moments at Arsenal. https://t.co/gr0Zho9WZ8

It will be interesting to see where Joe plays her against Spurs and whether she can maintain the high level she has shown during pre-season. Against Barcelona, Joe trialled a double pivot of Jill Roord and Danielle van de Donk which very clearly did not work. Viki Schnaderbeck, Leonie Maier and Leah Williamson have also been tried in the defensive midfield role this summer.

THE OPPOSITION
Tottenham have had a busy summer as they prepare for life in the top flight. They also have a strong ex-Arsenal core. Goalkeeper Becky Spencer and winger Gemma Davison have joined the club this summer and both formed part of the Gunners’ quadruple winning squad of 2006-07. Former Gunners trainees Anna Filbey, Jessica Naz and Rianna Dean are also crucial players for Spurs. However, Naz, has also ruptured her anterior cruciate ligament and is likely to miss most of the season.

✍️ We are delighted to announce the signing of forward @KitGraham!

They have added well this summer, with Lucy Quinn, who scored against Arsenal for Birmingham last season, joining, as well as New Zealand captain Ria Percival and Dutch international defender Siri Worm has signed from Everton. Charlton striker Kit Graham is an interesting pick-up, Kit has an excellent goalscoring record at a lower level but now has the chance to prove herself in the WSL. 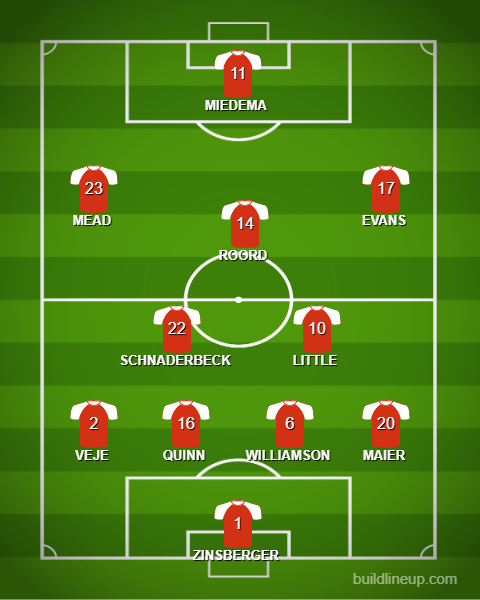 HOW TO CATCH THE GAME
The match will take place at Boreham Wood’s Meadow Park on Sunday, kicking off at 2pm. A small number of tickets are available on the gate at £12 adults and £6 concessions. The match will not be screened or streamed live.

COMING UP
We will have exclusive player reaction from the Spurs game on the site on Sunday afternoon and the September feature interview will be available next week too. Pippa and I will have a season review podcast recorded in the next few days where, all being well, we will hear from Gunners boss Joe Montemurro and we will also hear from a knee surgeon who has operated on several female athletes on why ACL injuries are so prevalent in female footballers.

Thanks for the preview your work is very helpful and underated

Amazing preview, thank you for this coverage. I just wondered, since the FA are streaming all the WSL games lives this season, will you guys be doing a liveblog?

Cheers man! No plans to at the moment, but could always give it a try and see if there’s a thirst for it. I’m at most of the games anyway

Cheers, Tim.
I hope we smash them, but clearly the FAWSL has been strengthened by the promotion of Sp*rs and Man United. Good players and good managers in both. It will be a very competitive season.

Yeah! Definite improvement in the Spuds team we only thrashed them 6-0 today.
Great to see Jordan on the scoresheet again but Jill “hat-trick” Roord and Leonie Maier both look the real deal and have significantly added to the quality of the squad!