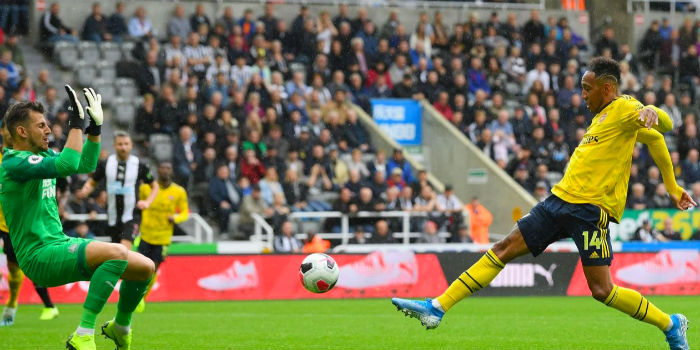 Pierre-Emerick Aubameyang’s first goal of the season was enough for a depleted Arsenal to beat Newcastle United 1-0 at St James’ Park.

The Gunners were far from their best but the Gabon international’s tidy finish on 58 minutes proved to be enough to seal the points on a wet and windy afternoon on Tyneside.

After the game, he was asked by the BBC whether the win was deserved. “I think so, we fought today a lot,” he said.

“It was a great game against a good team. It was important to start with a win, last season we started bad, so we are happy.

“It is always positive for all the squad to win the first game, everyone is happy to get three points and we’re looking forward to winning more games.”

Aubameyang ended last season with 22 goals to his name, enough for a share of the Premier League’s Golden Boot alongside Liverpool duo Sadio Mane and Mohamed Salah. The striker says, he’s got his eye on repeating the feat this year.

“Of course it is in the mind of a striker but first of all the team is the most important. I’m really pleased the goal helped us win the game.”

The difference between the two teams, which is not a good thing unfortunately.

You’re right, Auba looked like the class player out there today, but credit AMN for the steal and assist that won this game.

Ya gooner
Reply to  charvakan

Ainsley really needs to play in midfield. That was a midfielders pass for the assist but he still sometimes gets rinced in wide areas. His composure on the ball he makes seem effortless and once bellerin is back I hope he plays there. He’s much better technically than xhaka and is some way ahead of guendouzi on the ball which is expected as he’s older.

HelderHughes
Reply to  Ya gooner

Every successful squad needs a utility player. AMN can play RB, RW or CM which is hugely useful. I can’t personally see him making inroads into any of those positions when everyone’s fit. But such a useful player to have, certainly something we’ve been lacking in recent years.

VAR will solve the problem
Reply to  charvakan

Definitely will need a lot of work and time. Ww cannot expect them to perform like Man City or Liverpool right away. New players and the youngsters need time. Essentially, half the first XI didnt start. Laca, Pepe, Luiz, Tierney, Ceballos, Torreira, Bellerin. Taking that into context, I’m satisfied.
Willock definetley will create competition for a spot in the midfield in few months if he keeps progressing. Mikhi and Xhaka are not really my favorite players but they did well today. Chambers did well as well.
Onward and upwards!

I too am pleased – in fact, we’re all really pleased…

I’m relived so I already know we win the title this year.

So at the end of December we will be champions ???

And with no Mustafi, that sinking feeling that something horrible defensively could happen at any moment wasn’t there either … Wow.

Much better for us than an exciting 4-4 game. Wasn’t a top four performance though. We still have plenty of time.

Getting 3 points and a clean sheet away isnt a top 4 spot performance? Please. You are playing too much fifa

1 down. Another 21 more to go. Just that lets get to that by christmas this year.

The win is the only thing that matters, let’s not get too worried about the performance.. The team and hopefully the way they play will be very different when the new players & those returning from injury are fully integrated into the team.

How the fk did Newcastle just get 1 yellow card in that match??? Should have been 5!!

The forearm smash on Ceballos during the goal celebrations was funnier than it probably should have been.

We needed a win to start us off and we got it. That said, and at the risk of being a little “negative”, it was pretty underwhelming with only a few bright points – Auba’s goal being one. However, it will help to build confidence and a lot of players, youngsters and new ones got a chance.

Great away win, what pleases me more is the clean sheet.

Good control and goal from Auba. Getting more and more busy pulling the ball wide for us (left particularly) and some nifty footwork which is encouraging.

Some moments he’s quick others when you expect him to be quick he seemingly isn’t.

BUT away from home with a bit more caution applied to ensure we kick off with a clean sheet, the right decision to go with him up top (and prob helped by Laca’s knock)