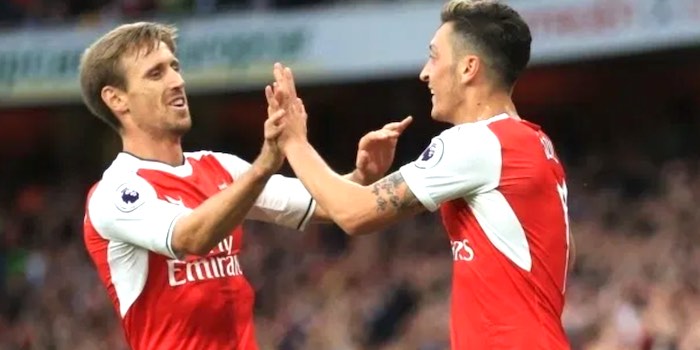 Unai Emery has confirmed that Nacho Monreal could leave the club before the end of the European transfer window on Monday.

The left-back has been linked with a move back to Spain with Real Sociedad interested, and at his press conference ahead of the derby on Sunday, the Arsenal boss was asked if his compatriot could be on the move.

“Yes, it’s a possibility,” he said, but there was no further information as to when it might happen.

The Spaniard was also asked about the potential departure of Mesut Ozil who has yet to feature this season.

“No, we are not speaking about the possibility he could leave,” he said.

“We’ve finished our transfer window and in Europe it’s going to finish on Monday.

“This week he is training well, he is progressing physically better and doing normal work for us. He is going to be closer for us and available for Sunday I think.”

There may well be other departures with Mohamed Elneny linked with a move to Besiktas, while Shkodran Mustafi is another on the potential departure list.

“We have some players who have the possibility to leave before the window closes,” said Emery.

“The club is working and some players know their situation. My focus and the team’s focus is for the game on Sunday and being very concentrated on Sunday.”

ToucanSam
Reply to  Voice of Reason

Scarier than you may think.

WHAT IF Sokratis gets knocked or suspended?

No Holding for a while.

That leaves Chambers and Liability Luiz. Maybe Mavropanos (himself still on the mend)

We may need to keep someone as back up still. Options will look VERY thin.

jw1
Reply to  Voice of Reason

Ready the defibrillators at The Emirates.
Business will be brisk.

This is perhaps the best front three Ozil has had since his real Madrid days and I fully expect him to thrive with them this season. Hope we as fans can put our biases aside and give him all the support he needs as he is a confidence player.

No bias from. But Ozil hasn’t delivered for a couple of seasons now. If he works really hard to get his chance and then produces great end product when the chances come, fantastic. But until then he is a long way down the pecking order in my opinion. Behind Ceballos, Willock, Miki and others. He diesnt the deserve a place on merit or history alone.

I don’t think anyone’s behind Miki.

I have a feeling he’s going to be super useful in the Europa this season.

I’m sure if he strings a few good performances together everyone will be behind him again. I just hope that “if” is not too big. Come on Ozil, get back to your best son.

There is certainly a way to utilise Ozil.

I don’t get certain fans. If anything he is an asset.

He isn’t weighing on our wage structure at the moment.

If anything Mhkitaryan IMO is ancillary to use. Remembering we also have Cebellos AND young Smith-Rowe to consider.

Personally I’d sell Mhki to mint some money. He is still useful in some leagues in Europe (Germany and Italy come to mind) and will be easier to move than Ozil.

I’m not sure Ozil or Mkhitaryan are easy to shift? Surely if they were? They’d both be gone? I think Ozil will be frozen out, and moved to the states in January, probably on a free.

I agree that it’d be better to give inexperience like Smith-Rowe a chance, than persist with either of these two, Smith-Rowe could be the future? Ozil+ Mkhitaryan are certainly not.

It’s a worry if Emery wants to play Monreal 1 last time on Sunday? Surely that means he has less faith in his immediate replacement?

I think Emery was talking about Ozil being available for Sunday

I can absolutely see why Monreal would want to leave and I have nothing but the highest respect for what he’s contributed to the club. One of my favourite players of recent times and massively underrated imo. However, I don’t see how it could help us to let him leave now and wonder whether we might regret not holding onto him until January. Tierney has been injured for a long time and has a worrying record of hip, hernia and groin problems. I think it’s a big risk letting Monreal go before we know whether Tierney’s injuries can withstand the… Read more »

Kolasinac before joining us made the Bundesliga 11 and at LB. That Kolasinac cannot do a good job at that position now could be testament to how poor we are at coaching defenders.
I hope Kieran doesn’t follow same path.

He was playing LWB that whole season though

He played as wing-back at Schalke, not at full-back. It’s obvious to anyone that his best skills are not defensive. And coaching might improve him and just maybe, if it doesn’t, that could well be testament to Kolasinac rather than the series of coaches he’s had under two regimes at Arsenal? I think the way that Maitland-Niles and Holding have improved defensively goes to show that quality coaching is available but sometimes you can take a horse to water…

Couldn’t agree more. I guess the only way we could get around this if Tierney was to have a setback/is not ready is if we loaned somebody in. Problem with that is the general lack of quality available in January but if they have a target or two it could work

That offer might not be there for him come Jan.. its a bit of a conundrum. But utmost respect for the way he conducted himself, Kos could learn a thing or two from him..

Yes, exactly. He’s been class throughout his time at the club. He didn’t mind when Gibbs was picked ahead of him, just got his head down and got better. As Blogs said in Monday’s Arsecast, he’s a solid 7 out of 10 player, rarely lets us down.

Emery confirms Ozil will remain at Arsenal. Now he has to use him or at least keep him on the bench. I am not known as an Ozil fan but this is getting really weird. Real Madrid tried to let Bale go and it didn’t work but they knew what they were doing and made it public. Two other clubs had similar situations with one of their players with big salaries. Bale made his quality prevail and Zidane ate his words. Man U sent Sanchez to Inter. Emery keeps on repeating same things as last year.

We have what looks to be the makings of a very interesting & modern midfield between cellabos/ Guendouzi/ Torreira / willock which will allow the front 3 more freedom. The trade off to Ozil is we will need the front 3 to have a lot more defensive responsibility. If Ozil suddenly starts consistently putting in world class performances then by all means shift how we play. However barring that he really should be more of a squad player for when we come across a packed defense

You seriously think he would perform as a squad player, getting the odd game here and there. I’m not so sure

I think he doesn’t get into our best 11 anymore as the team functions better with the midfielders i mentioned which means he’s going to be a squad player. Ozil can be very good to have in that role if we’re facing a packed defense or are chasing a game

1)Monreal-I said it before he will probably be moved on before Kolasinac. The Bosnian one of those favorite maligned players much better than some prefer to imagine. Much like Granit who made some prefer to focus now on (and avoid the elephant in theroom that is sideshowbob) when he made two great passes against Liverpool leading to goal scoring opportunities for Pepe on the break and Auba plus 3 stops (as many as Luiz or Sokratis) But people prefer to see what they want to see and ignore that which is inconvenient truth. Monreal has been in good form recently… Read more »

You complain about people passing judgement on players who they’ve seen week, week out for extended periods of time, yet judge David Luiz after 2 games!

With Bellerin and Tierney fit could be better but this squad this lacks the DM and 2 CBs that is required in the spine of a successful team. The 2 CBs Upamecano and I forget the other from Bundesliga as well have the profiles of future world class CBs..

Not once all season will we line up like that

What I wouldn’t give to see this lineup tho:
Laca
Auba Özil Pepe
Ceballos/Xhaka Torreira
Tierney Holding Papa/Luiz Bellerin

I think latest update is Holding is short for the weekend but looking good completing 90 with U23s.

Which is a relief considering option of having to play Luiz-Chambers combo should Sokratis go out.

Still seems like such a strange deal, Emery clearly still likes him given he’s first choice, so you have to assuming this is a decision from upstairs – splashed £25m on a LB, therefore one of our current LBs has to go, no offers for Kola so Nacho goes. Can’t say I like it.

I have a feeling Mustafi would rather stay and not even play and just pick up his wages like his mate Ozil has done all last season and continues to do in this one. Maybe once or twice have a kick about vs carling cup/europa group stage teams (at home of course, away matches are a bit too much effort). I mean, I get it. They’re not good at football and media/social media/the general public (in England and Germany) do make fun of them quite a lot so maybe the most cathartic thing for them is to do, is just… Read more »

I don’t like the idea of Nacho leaving. This team is always injury riddled. Tierney has a history of injuries, and when he goes down you’re left with Kolasinac as your starter which is a scary thought.

Emery should play Ozil at the HOLE. He is the best players in the world playing in the HOLE. Recently Alonso of RM / Liverpool said that. Ronaldo has said it before also. They played with him and they know what the F they talking about. Who is Emery? Keep refusing to play him. Or play him bits and pieces. Play him in all other positions. WHY??!

I understand people want Ozil to do well. But come on, the guy has delivered in 1-2 matches since Jan 2018!