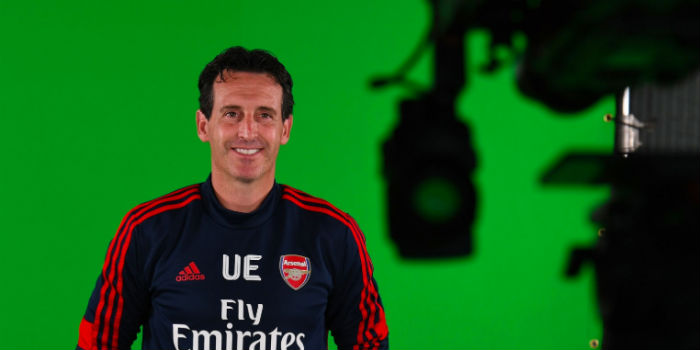 Unai Emery says he’s excited to work with his reshaped Arsenal squad and believes they can close the gap on last season’s runaway top two; Manchester City and Liverpool.

The Gunners recruited six new players and moved on 20 during a hectic summer that also saw a number of Academy graduates earn promotion to the first team.

With some of the squad returning late from international duty, a few faces likely to leave and injured players stepping up their rehab, it’ll take a few weeks for things to calm down at London Colney, but the foundations are in place for another tilt at the top four.

Facing the media ahead of the opening game of the season with Newcastle, the boss was asked which players he’s looking forward to working with.

“All of them,” he said, “and I want to show and say to our supporters that I am very excited to work with Pepe, David Luiz, Ceballos, Martinelli, Kieren Tierney, and with Willock, Nelson, Bukayo and Xhaka, Lacazette, Aubameyang, Leno, Emiliano, Matteo.

“I want to achieve the top four to get into the Champions League, but above all my first and top challenge is to improve each player in his career.”

Emery also took a moment to assess Arsenal’s rivals. While he accepts that we might not challenge the top two for the title, he insists that cutting the gap should be a priority.

“After, Tottenham, Chelsea and Manchester United have the same objective as us. Last year there were less points difference between us and this year is another challenge for them and for us to achieve the top four.

“Other teams are coming back and signing very good players and working very well. Everton, West Ham, Leicester, Wolves, Watford…the Premier League is the best competition in the world.

“We are going to work and be with a big challenge to compete in this competition to find the top four.”

Evidence that Xhaka has nudes of Emery.

You mean the best deep lying midfielder in the country with an incredible passing range and has a great partnership with Torreira. Captain of Switzerland and hopefully captain of Arsenal

Ya gooner
Reply to  Martin

lettra
Reply to  Ya gooner

And Cliff ..but mostly Martin.

“… the best deep lying midfielder in the country…”

The best? The country?!

Shiiiiiiiiet… now I KNOW I need some of what you’re smoking!

I’m all for bigging up our players but this is to much. Lol

He’s not even the best deep lying midfielder in our squad.

If he makes our first 11 consistently, we aren’t utilising the abilities of our other midfielders enough.

Guendouzi, Ceballos, Torreira, Willock and AMN should be given more opportunities as their athleticism suits our team (and this league) a lot more.

Not to dive too deep into this, but all I will say is that although fans will always disagree and hold varying opinions of players, there is generally consensus about say, Salah, Kante, Buffon, Mbappe, Kroos, Busquets, etc. No one really debates how good they are. The mere fact that our fanbase has been fighting over whether Xhaka is a good player or not is the best argument I can make that he is at best a player with glaring weaknesses. Our fans are not blind, or looking for scapegoats. We see his flaws on a weekly basis, and yes,… Read more »

Does he wants to work with Ozil?

Of course if he’s more motivated than usually, why not? There’s reason to be motivated now more than ever

We should have paid Monaco 30 million to take Mustafi. He will cost us between 12-18 points this season.

As much as Mustafi is a liability I hope he improves and backs up his ‘i want to stay and fight’ by playing better and not sliding in every bloody time and improve his positioning. If we are stuck with him, we need to get behind him.

Question: Which Arsenal player do you see being the first to become valued at 100 million pounds ?

Also Luiz is bout to play the best football of his career. He’ll leave a Legend at 35 because this is a special relationship/connection between him and our manager. Complete respect between themselves and admiration from Luiz.

I’ve a feeling Ozil will leave for MLS very soon.

For some people, their only inteligent contribution is to divert every news in order to remind us how shit Mustafi is.. pls chamge the record, Mustafi didn’t even play the final and we had our a**es handed over to us by a joke of a Chelsea team. Mustafi is an easy target, there are other people also responsible for our broken defense.. some even more so than Mustafi.

Hope that this season will be better with the players we have. Once the injured players are back it will be fire.

All things said…I think this coming season we have some flexibility tactically to go into various different set ups. Adrian Clarke had a good piece on ArsenalPlayer. We will have option to go 4-2-3-1 pr 4–4-2 or 4-3-2-1 Emery has been striving to add tactical flexibility to make us less predictable and more responsive to various scenarios. Which is why adding the right assets for him this summer has been key. As I mentioed start of summer, we needed first and foremost a Cback, a CM and a winger. We’ve only half fixed (if not band aid again) Cback but… Read more »

Blogs is taking the piss with those Unai smiling photos and I’m all in! hahaha

Never rated Emery much and was disappointed in his appointment.
But….
He has done very well this summer and I have to take my hat off to him.
Hopefully we will see more of his team this season than Arsene Wenger’s
If that is the case we are good enough for top four and if we achieve that we can push on the season after.
Pleased to see a lot of the deadwood shipped out…

I think blogs needs to start giving you a character limit. I loath the energy my phone uses loading your novels.

Unknown clause at Arsenal that we need at minimum two player with mop hair to confuse opponents.

The league has to be priority. Top 3 if possible.

BUT we will have to see how the band aid holds up.

Let’s just stay positive and back the manager and team. They have done a good job of revamping with a limited budget. Its a good start.

I’m sure we all hope that the new look side can close the gap on the top two (both of whom have won their opening games convincingly). It’s certainly a tall order, but not impossible.

Overall squad strength will be a major factor as you obviously can’t put your best team out in every game for many reasons. Whether we’ve the strength and quality in depth, across the squad, that’s necessary to close that gap is something that we’ll see in the coming months.