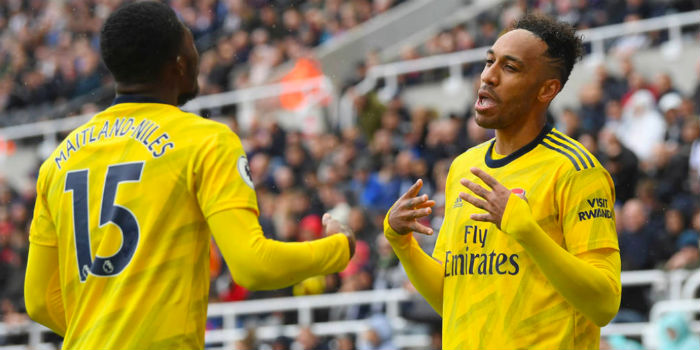 Ainsley Maitland-Niles says he took advantage of Newcastle fatigue as he brilliantly teed up the deadly Pierre-Emerick Aubameyang for Arsenal’s winning goal at St James’ Park.

On 58 minutes, the 21-year-old, a midfielder by trade but playing at right-back in Hector Bellerin’s absence, showed great awareness to steal a loose pass in his own half before bursting down the right flank. With space in front of him, he carried the ball 50 yards and then carefully weighted a cross for Aubamayang to pounce.

The Gabon international took one touch to control before deftly flicking over keeper Martin Dubravka, the only goal in the 1-0 win. The fleeting moment of quality was enough to separate the two sides in a scrappy encounter.

“They’re a team that can mix it up – they can play nice football and play long balls. It’s just a fight until the last whistle.”

Reflecting on his part in the goal, he went on: “On a big pitch like this, you can get tired, and I guess that’s what happened with their defence. It was a big opportunity for me to give it t him, I executed it well and his finish won us the game.

“I expect him to score. Him, Lacazette, Nico Pepe, Mkhitaryan – we’ve got good players that can score. We’re never in doubt when people are through on goal.”

Is he as ruthless as I can imagine ?

Ok.
Hands up.
Who said we should’ve sold Auba at the end of last season?
*Reluctantly and embarrassingly raises hand*
Mea culpa.

That would have been the worst decision the club could have made. Laca even before him. He is the goal scorer that we rely on game after game.

I think he’s got such good know-how that he’ll remain a prolific goalscorer even after his pace wanes.

He also seems like such a natural athlete, he’ll probably remain pretty rapid well into his 30s. I’m glad we’re in the process of tying him down to a new contract, even if he’s already 30. I think Lacazette in comparison might struggle a little more when he enters his early 30s – shorter, stockier players tend to lose their athleticism earlier.

Lack of Perspective
Reply to  sami

Both Auba and Lacazette are in contract extension talks with Arsenal (neither have actually signed extensions so far as was indicated in earlier press reports). Auba has two years left on his current contract, and Lacazette has three years. The club policy now is that players who do not sign extensions will be sold – no more running down contracts like RVP, Sanchez or Ramsey. Let’s hope that they both sign.

How long before AMN is no longer referred to as a midfielder? I mean, he spent most of his youth playing right wing, made about 3 senior appearances in midfield and then played at full back. When I watch him I don’t see many qualities of a central midfielder, he is careless in possession, positionally suspect and rarely shows any vision. He’s quick, can dribble a bit, a fairly good crosser and makes a good recovery tackle. I think full back is his best position, but he will probably only ever be good enough for second choice. He is only… Read more »

Like a lot of young players he struggles with lapses in concentration, and so consistency.

Playing at RB has helped him improve defensively and exposed him to more 1 on 1 duels. The whole stick-em-on-the-wing Wenger trick.

I think he’ll make a very good midfielder – he could definitely do a job in that double pivot, although I doubt he’ll ever lose his multi positional ability.

Look forward to seeing him in an Arsenal shirt for the next decade.

Number one penny
Reply to  Ross

Think it’s too early to judge. I’d like to see him grab the opportunity as willock is attempting to with enthusiasm if offered.

By that logic. we should refer to Xhaka as central defender, since he played there a few times last season and doesn’t have required qualities to be a central midfielder. 🙂

Except AMN has barely played in midfield….but I would agree with you on Xhaka not having the qualities needed

🙂 thanks.
And you’re right he barely played in midfield, but in those few games when he did, he did impress (southampton 5-0 win, and especially against man utd at the end of AW’s last season)

did he include micky in the last sentence? really?

Good performance by AMN in his NATURAL position.

Its his to work on and he has good power and pace,a calm disposition and real threat going forward.

What I like about him (which amongst other things stands him night and day to the now departed Jenkinson) is he looks up before whipping in a cross.

Like the way he followed their winger to the byline and nicked the ball off of him calmly.

More to come I feel.