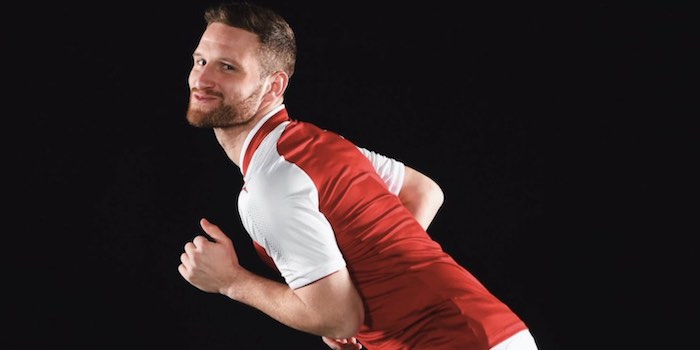 Shkodran Mustafi’s agent, who is also his father, has admitted that while the player would like to stay in London, it would probably be best for all concerned if he moved on.

His comments came in a statement to Sky Sports after Unai Emery made it clear the German is not figuring in his plans for the new season.

The former Valencia man has been left out of the squad for the last two games, and Emery said of him and teammate Mohamed Elneny, “I think now the best for them is to be protagonists in another team and to get another challenge for themselves.

“I spoke with them a lot of times last year and this pre-season. I think it is positive for them to leave and sign for another team where they can be protagonists and be happy and continue their careers.”

In the statement, Kujtim Mustafi said, “Shkodran had a great time with Arsenal. We still have a contract for two years and can imagine to stay in London.

“However the best for both sides is probably to work on a transfer. But for that it also needs market-driven transfer-fees.”

There are suggestions Arsenal are seeking something in the region of £25m for the former German international, but we suspect we’d settle for a fair bit less than that.

Not least because we’ve basically told the world we don’t want him, and that hardly strengthens your hand in the transfer market.

Imagine the picture above on a split screen with last seasons table. It’s scarier than nightmare on elm street.

Where on earth did that picture even come from?!!!

Maybe stop disliking him then? He seems like a decent guy, notwithstanding the defensive howlers

Actually ran into him once in Frankfurt airport.. he seemed a bit of a dick tbh, nothing like Poldi or even Giroud who always seemed really nice even in public.

Just got that Friday feeling all of a sudden

Emirates has been toxic for too long I’m totally against the abuse he gets but it’s time to part ways.

Any abuse (verbal, in this case) is unfortunate, of course, but the fans at The Emirates who have seen him week in and out (as I have) have had enough – as has Emery now.

We cannot afford Mustafi’s error-prone performances. Wenger certainly wasn’t ruthless enough over the years so it makes a change for the Arsenal manager to make it clear that seriously under-performing players, or players who are just surplus to requirements, need to look elsewhere. Long may it continue for the sake of the club.

Wenger let go Denilson, Santos, Podolski, Chamakh even Walcott and Arshavin. He does not feel the need to tell the world about it.

It took 12 years for Wenger to work out that Walcott was simply not very good.

Never fufilled his potential but downright wrong and frankly daft to say he was not very good. Also he repeatedly showed promise to push on in that time. Something that is not true in any when it comes to Mustafi

The difficulty in this whole thing is that Walcott CAN be good enough!
Just not often enough.

But how many players simply sat put and ran out their golden contracts because we were too nice to give them the push? I prefer the ruthless approach and it’s not like Emery said they were shit or anything.

Well, he’s caught on quickly, hasn’t he? I’m not sure Emery could have put it more tactfully than he did a few days ago – other than pointing to a waiting taxi for the airport! Hopefully, we can draw a line under this whole, unfortunate, episode – although it feels to me more like the complete box set, with extras. We certainly won’t get £25 million for him and I don’t believe we really think we will. I imagine we’ll be doing well with half of that. Unfortunately, the kind of deal that Valencia managed to get us to sign… Read more »

In some ways I wonder if a loan might be a good option. He does have his moments and was once upon a time viewed as good enough for the German international team. Possible they he could go somewhere and find some confidence and push his price back up….. But then he might want to come back… so this is probably a terrible idea… you should probably all ignore this comment, sorry for wasting your good time.

A loan was what Roma were proposing, I think. That’s gone quiet now though as far as I can see. Given his poor overall performance with us any sensible club will certainly want to try before they buy, so to speak. If only we’d done that with Valencia back in 2016 … one of the great “what ifs”, eh. The problem there is, of course, wages. Given that he’s on a very good salary with us – anything up to £150,000 a week depending upon which report you read – we would almost certainly have to subsidise his wages with… Read more »

Everyone always asks how Valencia got us to pay 35 million like they weren’t extremely excited to be buying a youngish world cup winning defender who was part of one of the stingiest Spanish defenses a year or two before? They also act like he didn’t have good performances at first. It really is best for both parties to start somewhere new because his mistakes cost us a lot of games but he might come good for someone else if he can do better mentally with a clean slate since he generally plays good 88 minutes and inexplicably commits errors… Read more »

Its not that much a mystery.

35m or 8m, we are not addressing a fundamental problem for many seasons.

BUT some fans prefer to believe we are stronger with Luiz in, Mustafi out.

Cue surprise and hissy fits half a season down.

Can we keep the 4th form politics out of this place please.

Emery wants to get rid of this guy and he brings in Sideshowbob.

Same problems just an older player who should know better.

We get a lot of stats these days. Goals, assists, hleb assists, possible goals, clearances, broken toenails etc. Are there any stats for goals this man actually cost us, and how he compares to say John stones in that regards?

No. Opta have stats for being at fault bits its only for when the defender gets dispossessed leading directly to a goal.

I feel a little sad because he’s not a bad guy and the abuse he has received was not warranted. You look at him and think, ‘he looks like a solid player,’ but truth be told he’s been a liability for too long now so they sooner we close this chapter the better. I’m sure he can do well elsewhere with a fresh start.

He’d do well with a cover/ sweeper style player like per. We dont have such players, so he should leave.

I love Emery, he takes no passengers.

If we get Mustafi+Elneny out permanently this month? Then Ozil in January, followed by Mkhitaryan next summer? Then build him a statue.

This was always going to be a 2-3 year project, but he’s demonstrating a ruthlessness that’s long been missing, his ruthless pragmatism is exactly what we needed after Arsene, I still think it’ll take a little longer, but we’re definitely on the right course

And the piss also

This was the end of him in an Arsenal shirt. https://www.youtube.com/watch?v=JOYZoZpU27E

I did not know that Mustafi’s father agent was also the mascot for Hotels.com in those hideous ads!

I’m a little tired of the moniker “World Cup winner” attached to Mustafi — although he was in the neighborhood, yes, and it’s technically true, but lets not conflate his contribution with that of Lahm or Hummels. He played 132 minutes for the 2014 winning team, having played zero minutes in qualifying. For 2018, he played a grand total of 147 minutes in all of Germany’s WC qualifying matches: 90 v *San Marino*, 21 v N Ireland, 36 v Azerbaijan. Then he didn’t make the actual WC squad itself. I’m sure he’s a lovely human being, and he’s obviously a… Read more »

Not that I like what Deschamps does but Laca could have been in the same situation with France. Laca was on the waiting list. If there was an injury to a striker, he could have called Laca and let him on the bench.
I am not comparing Mustafi to Laca. I am saying quality players stay on the bench at WC. Dybala, Dembele, Lemar did not play a lot at the WC.

Had no idea Mustafi was a KC fan!

This picture is wrong on so many levels.

At the rate David Luiz is replicating Mustafi, no loss.

we have a much more experienced player who can do the same mistakes.

Two absolutely farcical errors shirt pulling (Bc he lost his player like he did with Barnes against burnley) and too tight for the second ceding space behind and some fans still want to imagine we did anything other than panic buy a band aid at best.

At this rate, we may need Mustafi.

Sing us a song, you’re a piano man!
Sing us a song tonight
Well, we’re all in the mood for a melody
And you’ve got us feelin’ alright

i swear it’s relevant to the subject 🙂