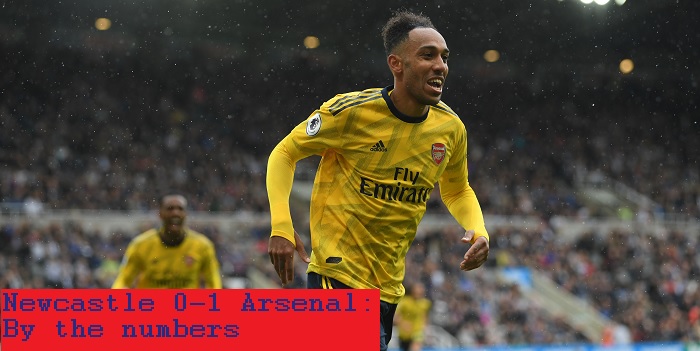 Arsenal started the season with just about as good of a start as they could have hoped for. They scored a goal, kept a clean sheet and took all three points.

It wasn’t pretty, with Arsenal only creating just two decent scoring chances but it was effective. Considering the number of players that were unavailable for 90 minutes in attack, you’ll take this result every time.

Newcastle 0-1 Arsenal: By the graphs 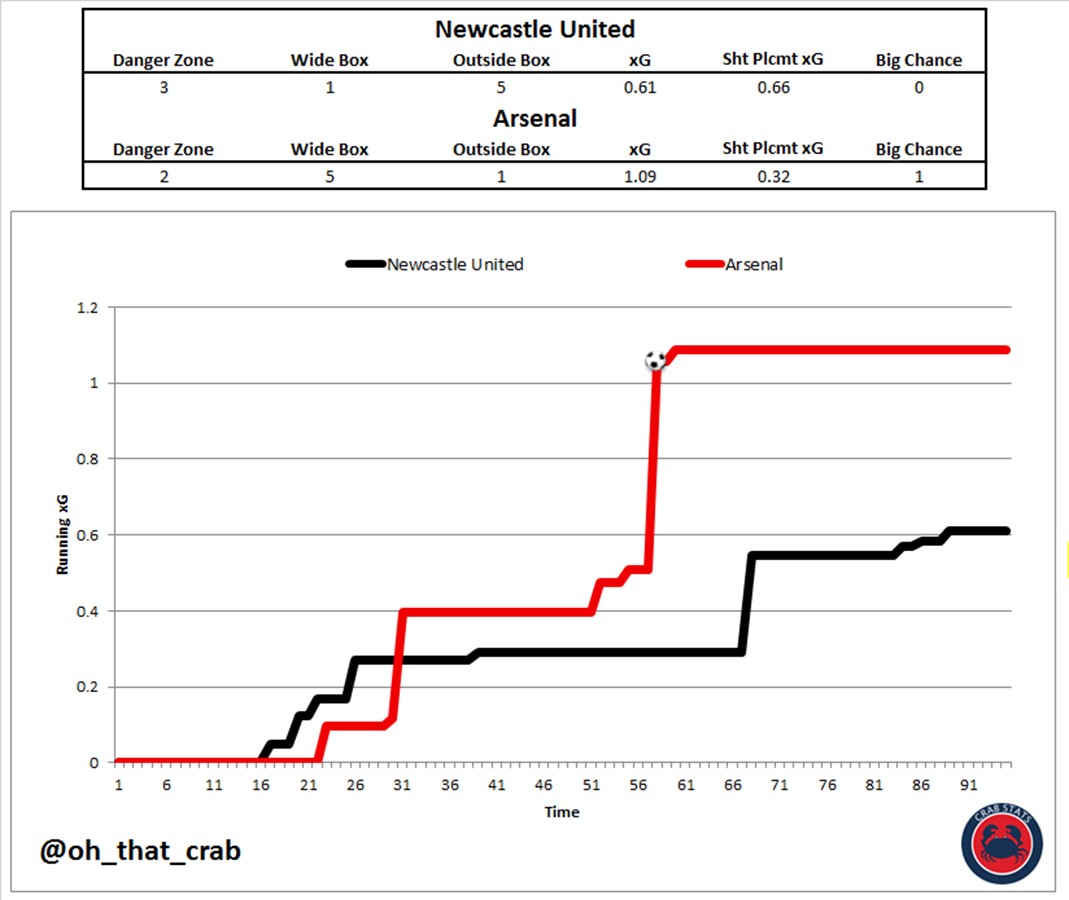 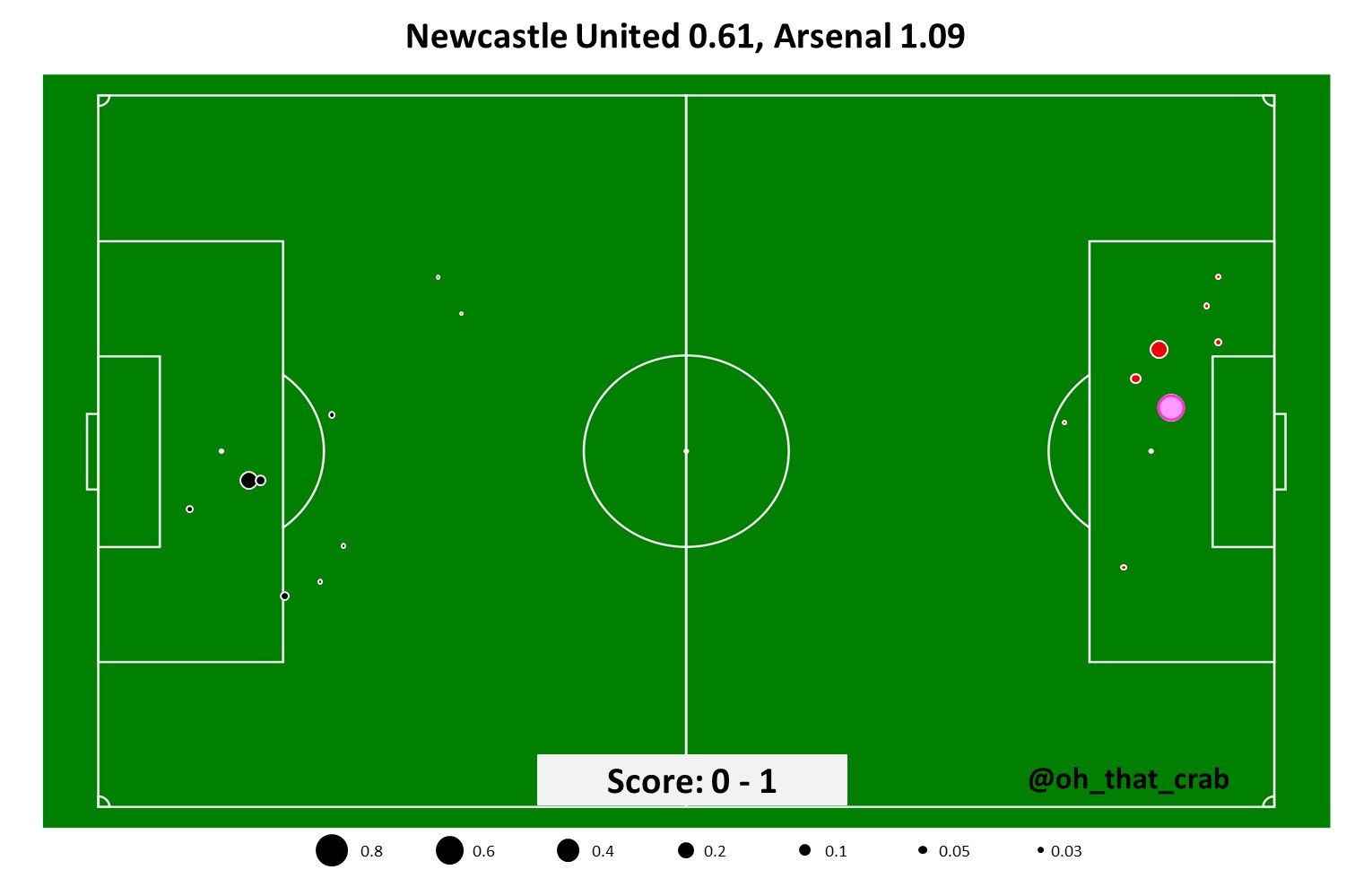 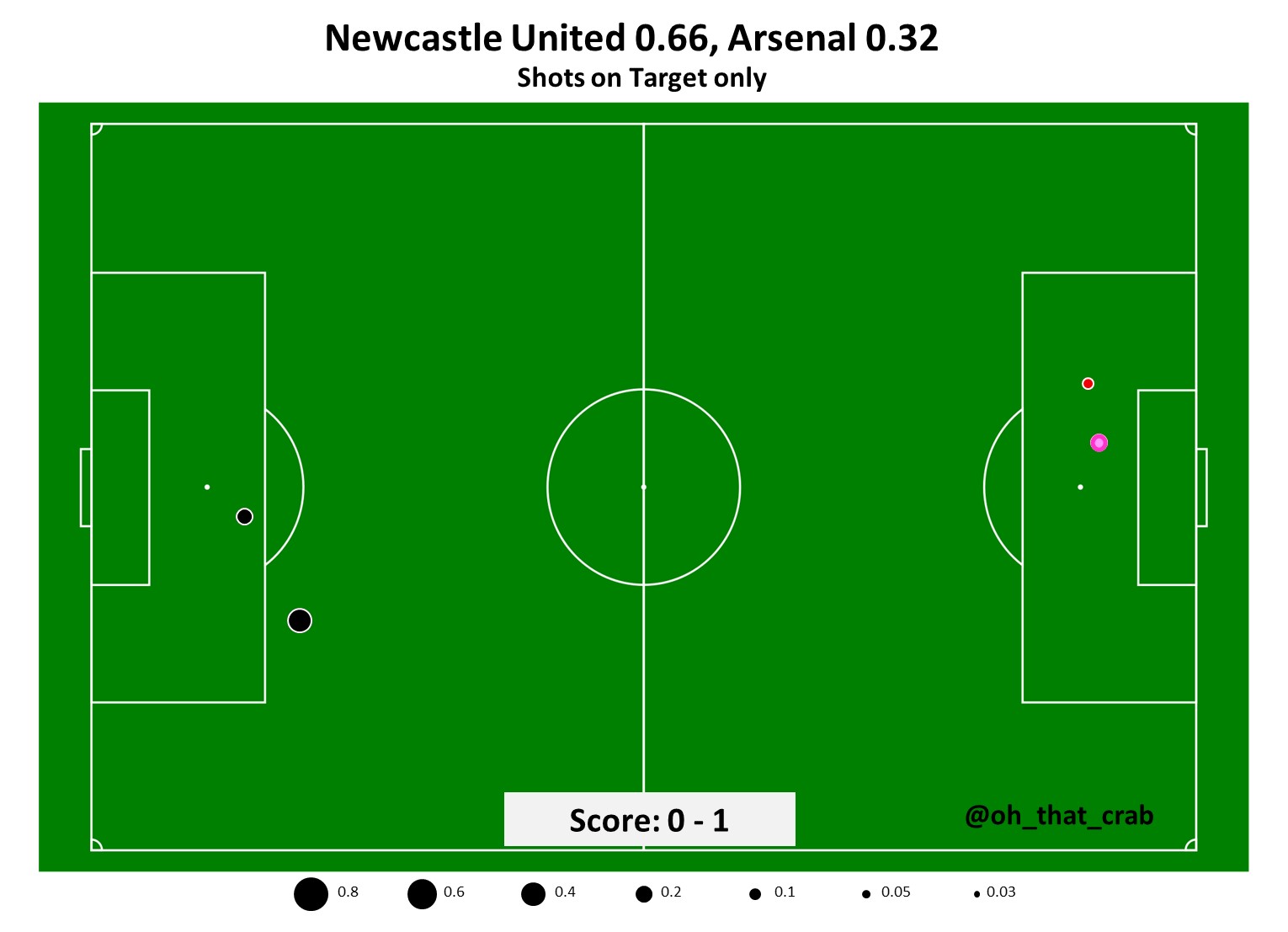 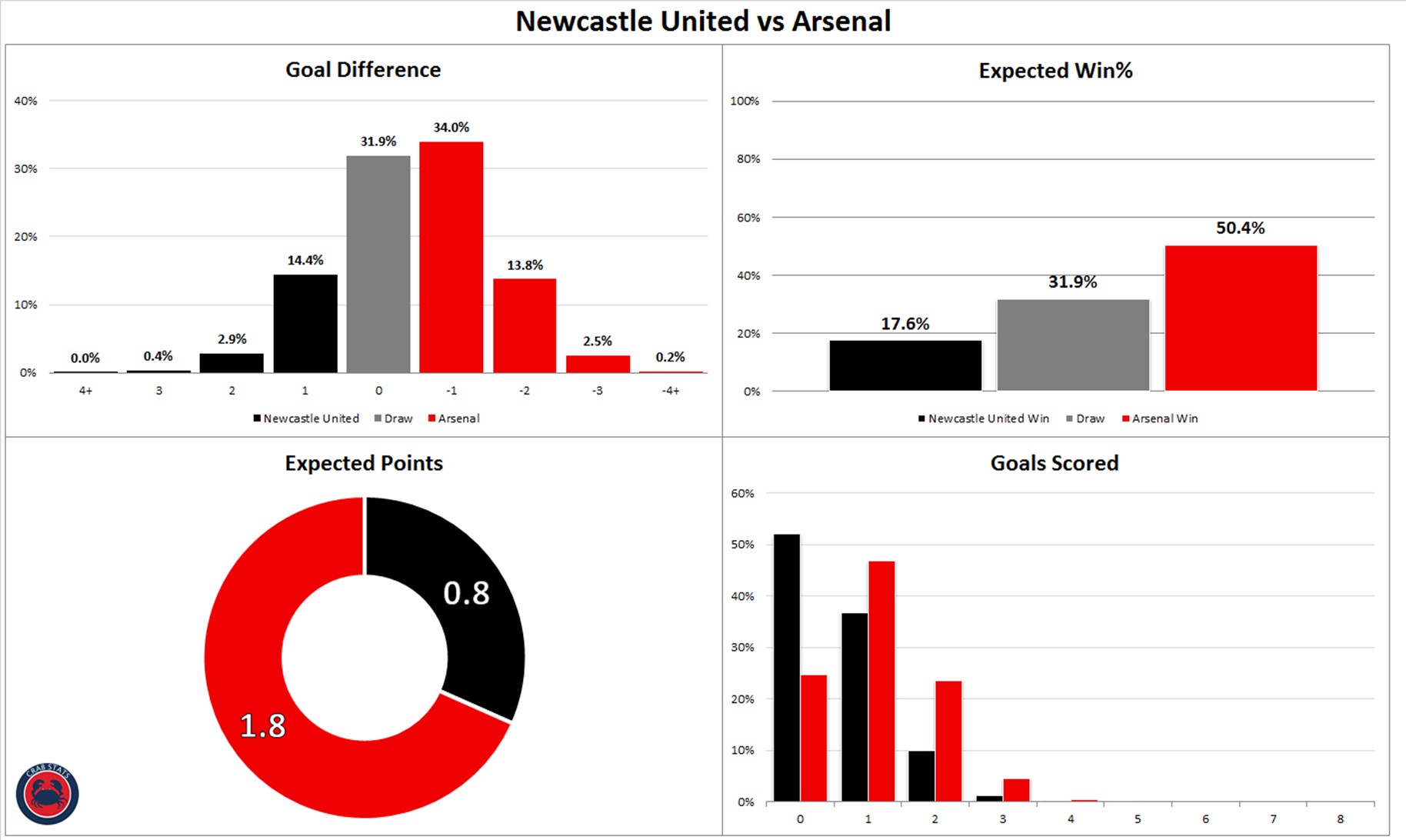 Newcastle 0-1 Arsenal: By the numbers

On a day where Alexandre Lacazette was at best an emergency option, new signing Nicolas Pépé was just getting into training and Arsenal started two teenagers in attack, the demands on Pierre-Emerick Aubameyang to be the man were huge.

Thankfully he was able to deliver, scoring Arsenal’s goal and being in general incredibly threatening. He took half of Arsenal’s shots, led all players in final third touches and was second to Henrikh Mkhitaryan (10) in touches in the box with 8.

It was an encouraging match that even as essentially the lone threat he was able to cause Newcastle’s back line lots of problems. I can imagine the addition of two more threats for a defense to focus on will only help.

Ainsley Maitland-Niles – Man of the match

Maitland-Niles put together easily his most complete performance as a right back for Arsenal. He did very good both defending (a major question after the pre-season) and as an attacker. Watching his total contribution to the Aubameyang goal you get an idea of his total match in one small snapshot of the match. 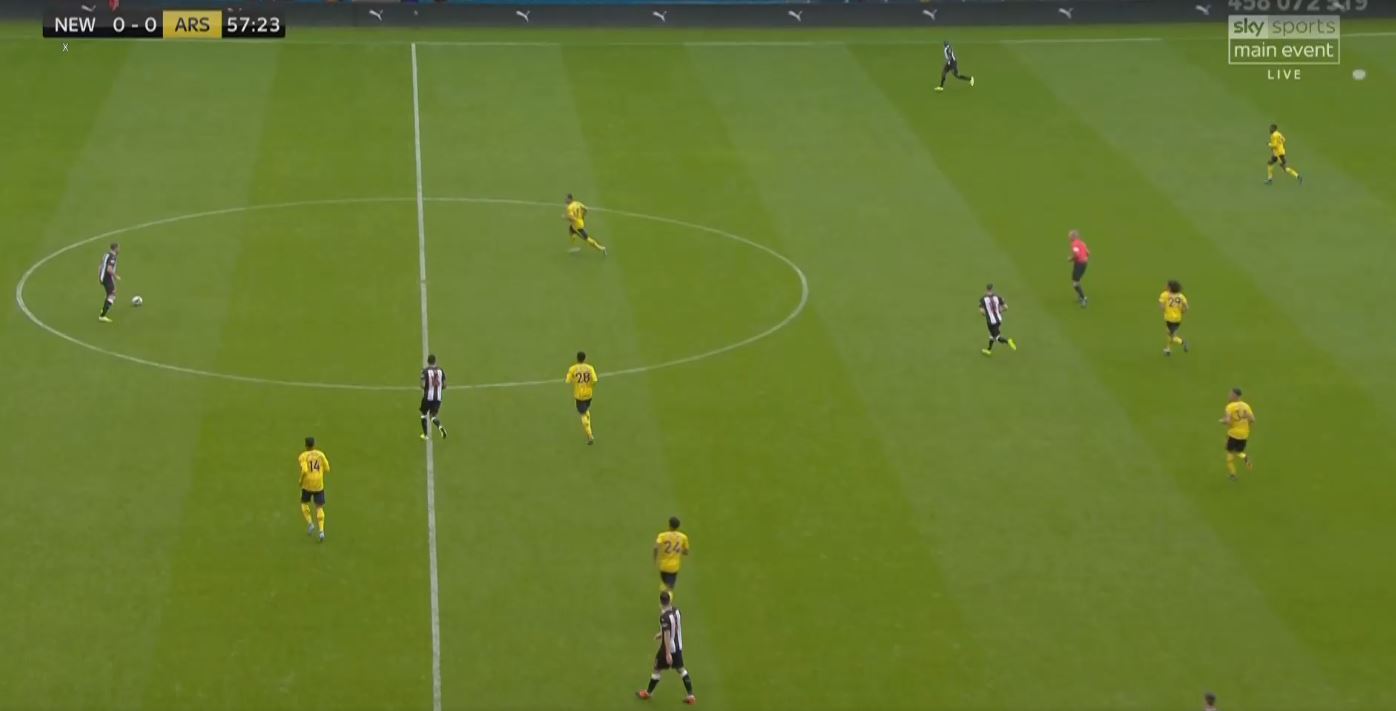 This should be a relatively easy pass to complete. The distance that Maitland-Niles has to close down is quite large and a pass typically travels much faster than a player can run.

Thankfully the pass was telegraphed and not hit very hard. Even with that Maitland-Niles read things perfectly and then showed off his impressive acceleration to cut this ball off perfectly. His first touch to knock the ball away was also perfect and sent him down the left wing. 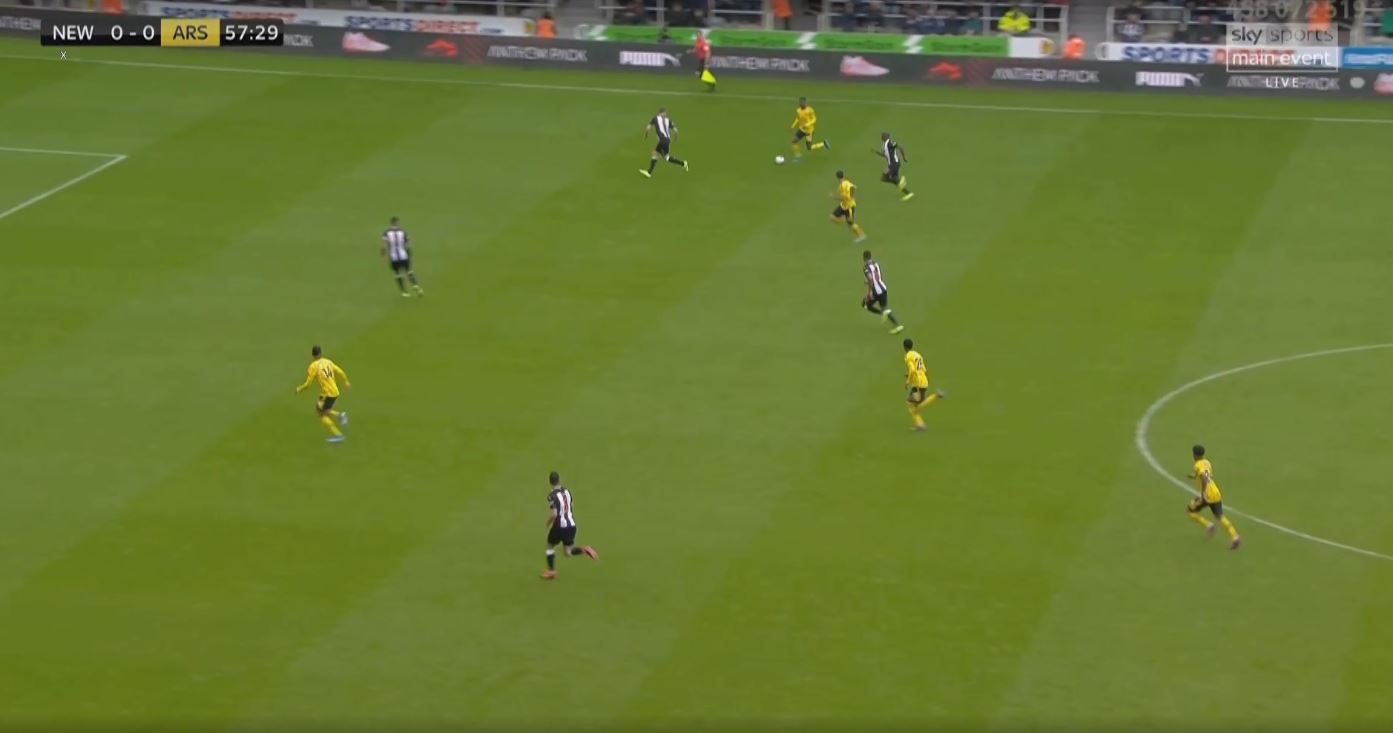 After carrying the ball 30 yards Newcastle’s defense is finally able slow him down, he takes this as a chance to survey the field and spots Aubmeyang running all alone in space. 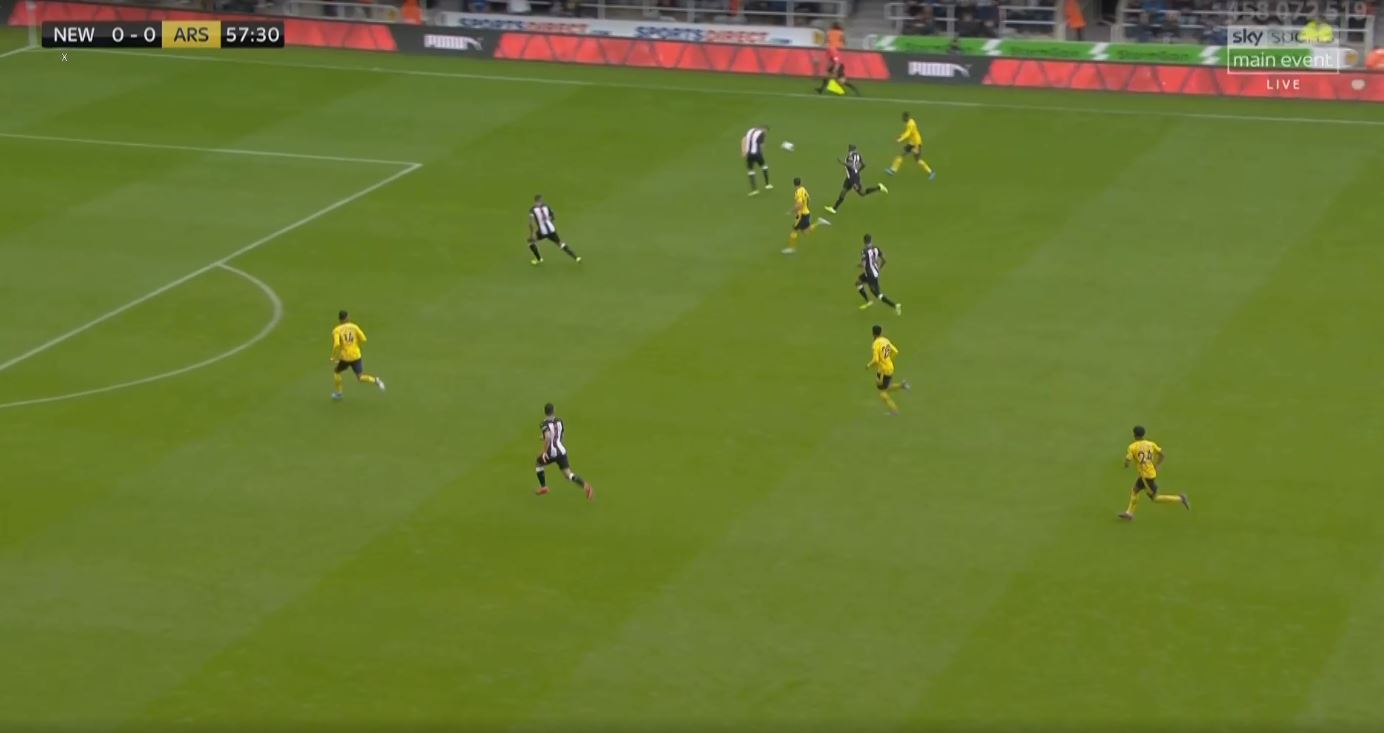 He delivers a great chipped ball over the two defenders and Aubemyang is one on one with the keeper.

Overall this is a great example of his great athletic ability, good technical skill and his incredible calmness to look to play the correct ball.

1 – Cheeky interception of a pass to the goal keeper as Newcastle looked to take a goal kick.

It wasn’t the most impressive group of debuts for three of Arsenal’s new players but it was also very nice to see all three get action. It also made for Arsenal having an incredibly strong bench in this match.

Ceballos got the most minutes in this match and in his short spell showed that why Unai Emery thought that he wasn’t quite up to the speed required for this match. His passing wasn’t dialed in with a number of passes not finding their intended recipients and one from the deep left defensive half that was blindly switched and gave Newcastle their most dangerous moment of the second half.

Pépé and Martinelli didn’t have a ton to do in his short stints as Arsenal protected their lead but they did come in and get some game time which is a good thing and hopefully should see them, especially Pépé feature more next week against Burnley.

Sources: Opta via Whoscored, my own database, Wyscout

3 points the only number that counted on the day.

The ‘No Fun at Parties’ comments are the next thread over >>>>
😉

Heh I will be throwing it at my house from now on.
There is always someone to make that obvious 3 point comment , but that was really the case yesterday. I wreckon we had 7-8 players missing from what we will consider our future starting eleven.

Half the time we drop points in this match, as per the simulated match. So… not the only thing that counts.

number of mustafi in arsenal squad = 0

Fuck me. In every comments section there’s some dickhead talking about mustafi. He’s a squad player. Not great, but he won the world cup and he ain’t that bad. For a squad player.

I don’t especially care if he plays for us again or not, I just get sick of our fans picking out a player and fucking hounding them out of the club. Forget it man, he didn’t even feature in this game – i get that hes not great and not flavour of the month, but for fucksake talk about the players that did.

Absolutely agree with you. Imagine he had to read the comment sections of Arsenal blogs (maybe he does???) – can you blame his self-belief? The fans at the stadium aren’t exactly peachy to him either. None of this does his confidence any good at all…

He gets paid a ton of money to play at a level acceptable in the PL. He plays like shit consistently, and deserves all the crap he gets on here and from Blogs. If our feedback somehow gets him out of here faster, excellent and bring more to the site pls.

This was more a joke than a malicious comment, I feel?

You have really taken a lot of offense at what is essentially observational humour… He’s just stated a fact, and it’s really upset you for some reason?

Arsenal have won the league more times at White Hart Lane than Tottenham.

So much so they had to rebuild that place!

This is something that isn’t mentioned near enough and needs pointing out regardless of topic or blog .

I would be curious to see AMN passing stats compared to other full-backs in the league (per 90 minutes, and at least 20 matches played, so basically for the whole last year or so). He often gives the impression of being a bit sloppy or careless with his passing, but my guess would be that his passing is actually pretty good, considering the position he plays in right now anyway.

Overall his passing is good but more limited in the adventure. It could be a thing the is being coached to do and not a limitation on his ability. I guess what I am saying is that he does well completing easy to medium passes but doesn’t look to try a lot of hard passes. Overall it is good for a full back.

He’s a sp*rs fan so it would be biased

Danny Murphy is the biggest bellend

For the past couple of seasons we had done very badly for our away games. Kicked off with an away win and a clean sheet. What else can a supporter ask for? COYG#

Good reviews about Ceballos. His passing should be better, when he gets chance. Considering performances he showed against Newcastle, we will miss Ozil currently.