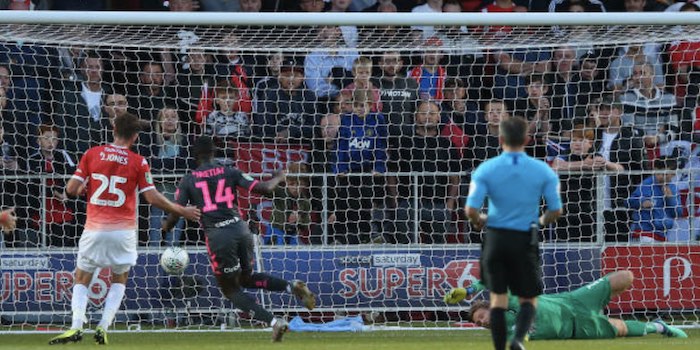 Eddie Nketiah joined Leeds United on loan last week, and it didn’t take for the striker to make his mark.

On his debut, in a 3-0 win over Salford City in the Carabao Cup, the Arsenal man put Marcelo Bielsa’s side ahead just before half-time with some smart movement and a close range finish.

So, a promising start to his loan move, and hopefully the first of many goals between now and the end of the season.

Nketiah: I could smell the keeper’s uncertainty

It’ll do him good at Leeds. They’re a big club with demanding fans. I’m sure he’ll do well and we’ll reap the benefits in the long run.

Fourfourtwo has a great profile out on Bielsa. He could’ve been useful this year, but glad to see he’s in good hands with El Loco

He has a knack for knowing where goal is. I think Martinelli and him are in competition for an eventual spot up top. We may lose one of Auba or Laca prey to a bigger club so Pepe was also brought in to develop and hedge against this eventuality. Of course from market replacement is also on the cards. We have to extrapolate a window or two down when we buy players (this is not new, Wenger use to do this as well) Academy development also going to be taken very seriously now. I think previously we were in danger… Read more »

Yes, of course, this is a blog about one of our most promising young forwards, so you decide to air your views on the defence. Obviously.

Get in Eddie!! I know this is good for him and us but I’ll miss him in the cups. Really hope he gets quality minutes and continues to develop.

His movement was excellent as well. The 2 (?3?) CBs could not be arsed to follow him around so they just kept handing him off, until that critical moment where no one had him.

Could he come back in the January window? I think it’s good that he is on loan just wanted to know.

He should have stayed while we loaned out micky

It takes 2 to tango. Who would loan Micky, honestly?

Outside the box is a true mark of a goal scorer, or did you mean the counter attack? If the former, it never hindered van Nistelrooy too much..

Plus how sweet is it that Chelsea threw him away in favor of Abraham.

A shame that a league one team can play this kind of sophisticated attacking football, but we, The Arsenal, can’t!

They’re a championship side playing a lower league side for gods sake.. We’d look like 70s Brazil against them. Negativity tends to stem from ignorance.

I was talking about structure, pattern, and style. Theses thing we lack against whomever we play against.
You seem like the type who judges his football only by the scoreline. in that case move on and never mind my comment.

I seem like the type who judges football only by the scoreline.. What do you even base this on.. Your comment has so many down votes for a reason..

Also I watched Leeds draw 1-1 the other weekend and they lacked structure.. So what are you basing this on.. A goal highlight against a minnows team. Give emery time with the new players before spreading your sad negativity

Watch his movement. He drifts in from the right wing looking for space and just keeps trying to make himself available. Then, as he sees his teammate coming free, he darts behind his marker for the tap in. Shades of Auba with the build of Laca. A little better first touch and he could be a first choice striker as those two age out.

Eddie scores on every debut!