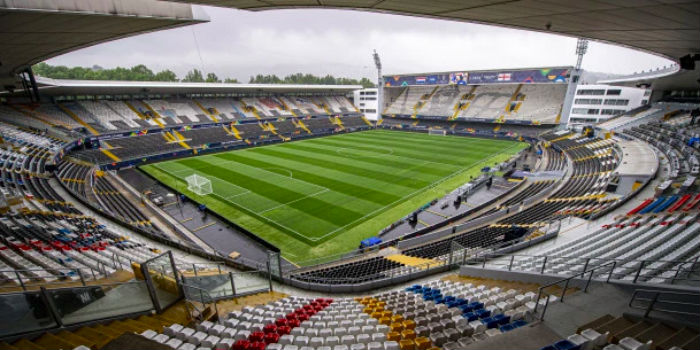 It has been confirmed that Arsenal’s Europa League fixture away against Vitoria SC will take place at 3.50pm on Wednesday 6th November despite an attempt by the Portuguese side to have it returned to a regular Thursday evening kick-off.

Due to Braga and Porto, both sides within 50km of Vitoria’s ground in Guimarães, being in the competition and higher ranked, our opponents are being forced to play all three of their home group matches at a time when there’s no kick-off clash. The logic is that local infrastructure, like policing, won’t be compromised.

To complicate matters, broadcasting rules stipulate that Europa League games can’t clash with Champions League matches, some of which start around 5.55pm, hence the afternoon kick-off.

This kind of nonsense is exactly what you’d expect from UEFA. An organisation that doesn’t think twice about screwing over the fans whenever possible. Are we all supposed to take an afternoon off work to watch the game?

Emery: I’ll blood the kids in the Europa League

Why should anybody be surprised at the disregard and utter contempt that UEFA show the fans, it’s how they operate, how they’ve always operated.

Neil Down
Reply to  Petit's Handbag

Or even ten to four on a Wednesday

The sooner Arsene Wenger is UEFA president, the better the game will be.

You couldn’t make it up.

The local fans don’t matter anymore. It’s all about the global TV game. The revenue from stadium tickets is probably smaller than what the leagues get in TV rights.

But even on TV a Wednesday afternoon game is no good for Europeans.
Ok if you are in Asia but this is two European teams playing a European Championship game organised by a European institution!
At least it is being held in Europe this time!

Believe me, we in Asia are use to the ungodly hours when watching euripean footballs especially the champions and europa league.
personally speaking, the new schedule will only put the game a couple hours forward, which is still a midnight here at my place. So I don’t see the big difference between the new and the old schedule apart from the day

Well, since I’m a selfish fucker, I’ll say I’m happy about this. This is probably the one week all year where a Wednesday morning is better for me than a Thursday afternoon (I’m in New York and might be leading a panel discussion on food waste that Thursday, which sadly would take precedence over the Europa League). Definitely can’t go to the pub for this one, though, before teaching!

I’m a selfish fucker too. This will suit those of us in Asia who rarely get to see European competition at a sensible hour.
Still, can I also agree that UEFA are cunts, or is that having my cake and eating it?

Oh yes, they absolutely are, and this is completely absurd even if it does benefit us personally (though as an American, I believe I’m barred by law from saying that c-word, no matter how often I might think of it).

between the usual 2-3 am with the old schedule and midnight with the new schedule. I guess we who live in especially in the far east are use to these ungodly hours by now

Watching the late kick-off on a Thursday kills my Friday.

For those of us in the Americas, taking an afternoon off from work is the *only* way to watch Arsenal in European competition

So, 7:50 am kickoff for me on the west coast of Canada. I think I can watch the first half on my phone on the train in to work. No chance for seeing the second half after I get to work, as my boss sits at the desk right next to mine.

This calls for a 45 minute bathroom break, sit on the toilet and watch the second half on your phone.

Playing on a Wednesday afternoon instead of Thursday evening before a tricky away game to Leicester on the Sunday probably benefits the team though, so silver lining and all.

I finish work at 12 everyday so its perfect timing for me ?

I live in Nairobi Kenya (GMT +3) so as selfish as it sounds, a 5.50pm kick-off on a Wednesday will definitely be a breath of fresh air as we’re used to staying up as late as 1am watching Arsenal in UEFA competitions and the occasional weekday league fixtures