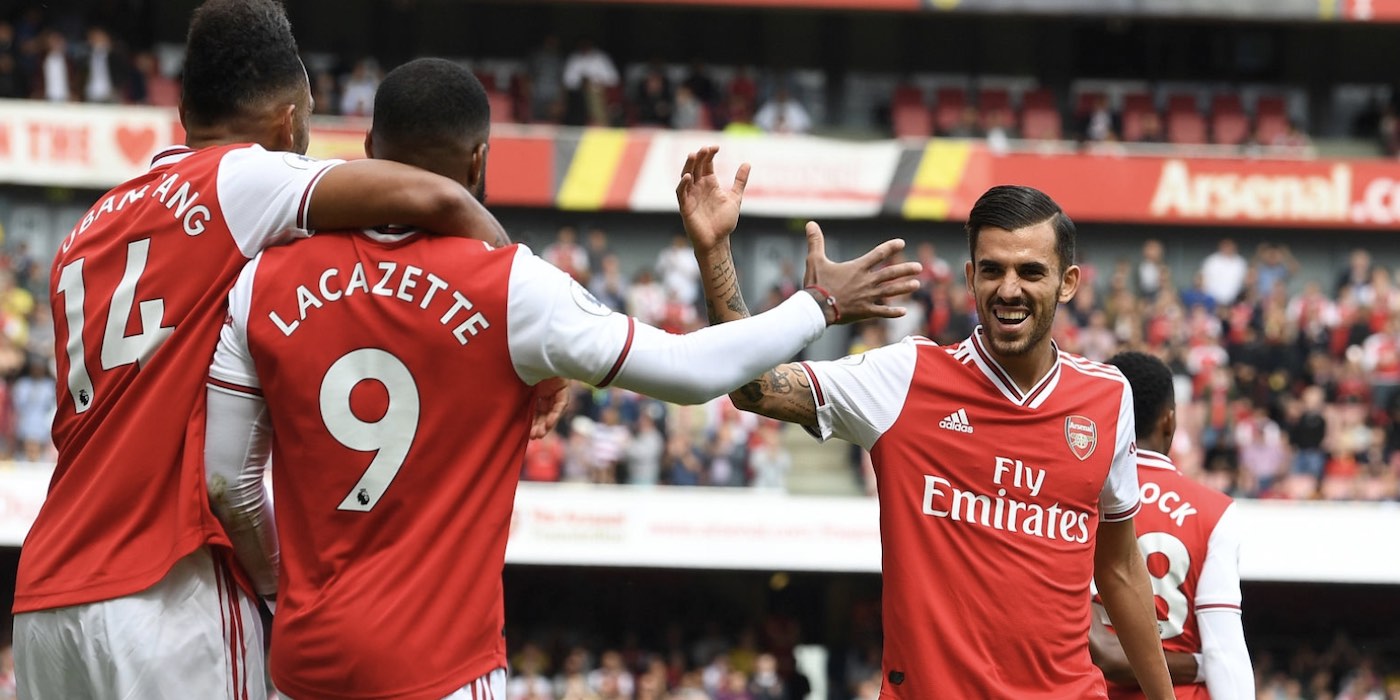 In a fantastic interview with Sid Lowe in the Guardian, Dani Ceballos cites the Arsenal front three as the players who can make the difference this season.

The Spanish international waxed lyrical on his time in England thus far, and how he can improve under Unai Emery this season, but when it came to identifying the key strength of the side he was quick to point to Pierre-Emerick Aubameyang, Alexandre Lacazette, and Nicolas Pepe.

The trio only started together for the first time in the 2-2 draw with Sp*rs before the Interlull, but more time together is sure to develop their understanding, and Ceballos is certain they’re ready to cause Premier League defences problems.

“We’ve got a very good, compact side and the three up front really make the difference,” he said.

“You can compare Aubameyang to Cristiano when he was at Madrid in the sense that he plays close to the goal, he lives for scoring.

“He’s very important for us, fundamental. Pepe is very direct, and Lacazette, for me, is the best player: he understands the game perfectly and, if he’s 100%, he’s going to give us so much.”

He also spoke about his connection with the Arsenal fans who have taken to him very quickly after his impressive home debut against Burnley.

““I don’t know what I’ll say in a year but now I’m happy,” he continued. “They see the game like I do; I love football like they do.

“They respect you and a player has to feel wanted. You applaud them and they applaud you back.”

Hhhmmm. So there’s a permanent offer on the table? Or he’s somewhat open to a move? Man, that would be incredible. Players like Dani are such a rarity – someone who can transition the team in attack with their own trickery. If we only sign him next summer, it’ll be a good summer.

I thought the same on first reading but have a feeling it’s meant more as a ‘we’ll see if I’m as positive at the end of the loan as now’. I truly hope that if we keep showing him love it’ll change his mind, but he seems like such a warrior and a stubborn bastard that I can’t see him not wanting to go set the record straight at Madrid.
Most likely scenario I reckon is that he goes back, has a miserable 6-9 months, then returns on a permanent deal in the summer of 2021.

Yeah. You’re probably right. There’s a certain bittersweet feeling when loanees boss it though. Not only is he raising his transfer fee and gaining more suitors but it also makes a move back to his parent club much more likely.

If only he could be awesome but in a way that no one else notices. Like The Jesus and Mary Chain or Cadbury’s double deckers.

Ssh! The Double Decker secret can’t get out.

For years now (even before he joined us) I’ve been trying to let people see just how good a player Laca is and now to have Ceballos (a very gifted footballer himself) talk about him like this just goes to show how right I was for wishing Arsenal signed him on 2 seasons before he joined us, and how right the club and Wenger were for bringing him in! We can achieve success this season if we play to our true strengths and if the players really show they want and desire it!

man i wish i was as humble as you

Hope to see that front 3 tearing Watford apart on sunday. Feels like it’s been a while since we’ve really pummelled a side in the Prem.
And boy wouldn’t it be nice to see it happening to Deeney..

Watford away is usually a tough fixture. A win without any injuries would do just fine, for me.

2 strikers and 1 winger.
Reality is, that makes an unbalanced front line.
of course individually they have the quality to score many goals. But it will be difficult to create a cohesive unit out of them like the Liverpool trio.

It’s definitely unbalanced, no doubt, but I think it’ll mostly be down to the midfield 3 to fix that, not the front 3.

Because of inexperience or fitness or 2nd season syndrome or acclimatisation issues or shoot-yourself-in-the-foot-itis we don’t know who the first choice 3 will be out of Guendouzi, Torreira, Xhaka, Ceballos and Willock.

Like Ceballos says in the interview, trying to figure it out “must make Mister Emery’s head hurt”.

Don’t let’s get too hung up on formal designations. I can’t think of a more unbalanced front line than Mbappe, Griezmann, and Giroud (front 2 with a winger? front 2 with a false 9? striker, winger, and false 9?). That team did okay.

No offense, guys, but the attitude of fans towards this player is funny. Giving him a standing ovation before he even touches a ball for the club and kissing his feet after each of his words and after each ball he touches (forgetting he was bad against Liverpool and his good game was against the all mighty Burnley). Funny… knowing that anyway he uses Arsenal to build fitness for Real next season and the Euro next summer. It seems the Arsenal PR and the media do a great job.

Maybe it’s just that we enjoy watching extremely talented footballers play football and not everything needs to be viewed long term? As a season ticket holder for a fair while I can tell you without a shadow of a doubt that’s the best debut I’ve seen from an Arsenal player. I don’t care who it was against.

They took points from City, Spurs, and Chelsea at the tail end of last season.

And trying to downgrade Ceballos’ performance because it was only against ‘mighty Burnley’ is weird seeing as he was probably even better against Spurs.

A Different George
Reply to  Mouise

He was great, in too short a time, against Spurs too. That usually counts for something.

Lacazette is such a complete player…Great Finisher..Good Hold Up Play.. He Can Dribble In Tight Spaces Too… He Has The Potential To Be The Best Striker In The World If Only We Play To His Strengths More Ofter And Start Him More This Season.

Adore and admire Lacazette the Beast! (not the Baptista kind) He is so determinded, can brake down any defence alone but perhaps with a little help from his friends he is much more effective.

With the capital letters in front of each word, are you Iwobi in disguise?

Dani Ceballos with a public service announcement for the fans who lose it whenever Laca doesn’t play. The complainers will keep complaining but we need to manage Laca’s minutes until he’s over the niggles and back to 100%.

Well it seems someone at the club was listening(reading?) and just said “we might as well just let him rest out the month and get fully fit”. We’ll miss him for the style he brings, but I’m personally behind the decision. Season is long and we need him 100%.

Results wise we should still have enough to win the games we should with Auba playing up top, Pepe wide with support from Ceballos and Ozil.

Certainly can particularly if (natural)wide players like Pepe and Nelson are involved.

I don’t see Ozil as competitive full match particularly if things are up hill but given certain circumstance when we need to unlock tight deep seated defenses he’s an excellent asset for us.

Don’t get all these moaners that constantly are so negative on him. Simply perplexing.

It’s a crazy situation. Laca was our player of the year but Auba is far more lethal through the middle than on the wings. Pepe is the world class dribbling wide man we’ve all been screaming out for.

Emery must make it work somehow, way too much talent to leave any of them out.

They have to be played in differently. Laca up top provides much more control and he protects the ball under pressure a lot better. Auba is more predatory. You need to play the ball ahead of him (like what Guendouzi did), predict where he will run to. Against more deep and static defenses, Laca is better. Against a slightly more open team, Auba with space to run more lethal. Thing about Auba is he is quick when up to speed or with ball ahead of him. Its an adjustment the supply have to make to tailor to his strengths. He’s… Read more »

Well,if we don’t have Laca till Oct then we need to give Nelson some feature.

He’s been mature with play and I think he has goals for us too.

Nelson-Auba-Pepe supported by Willock-Cebellos-Guendouzi can provide plenty of high energy to overwhelm opponents.

And maybe Ozil or Torreira (depending on control of game) late on for one of the mids.

Hopefully the love from the fans will keep him here.