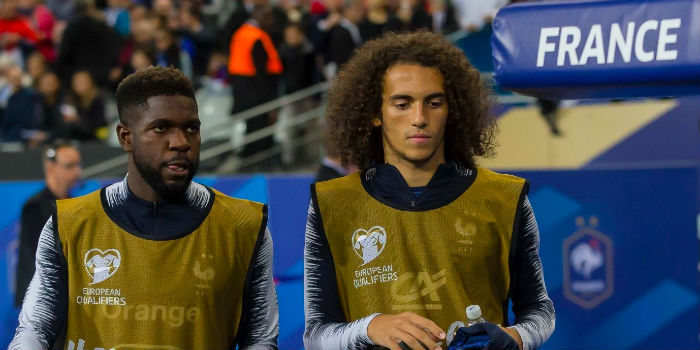 Didier Deschamps says Matteo Guendouzi has ‘a big potential’ but he’s not asking for anything other than ‘freshness’ and ‘dynamism’ from the midfielder now that he’s part of the France senior squad.

The 20-year-old was handed his first call-up by Les Bleus last week after Paul Pogba pulled out with an injury and he was on the bench as they eased past Albania 4-1 at the Stade de France on Saturday.

Ahead of Tuesday’s match with Andorra, another chance for the Arsenal man to make his debut, Deschamps outlined why he thinks Guendouzi has a bright future.

“Do not ask too much, he’s a young player, who is still the Espoirs generation, who plays a lot of matches with Arsenal where there is strong competition,” he told his pre-game press conference.

“He’s the modern midfielder, box to box as they say there, with a lot of power and technical quality too. He’s there. What I expect from young people is that they bring this freshness, this dynamism.

“He is a very young player but with a very big potential.”

Arsenal will be hoping that if Guendouzi does play tomorrow that he comes through the game unscathed. The Gunners already have slight doubts over the fitness of Granit Xhaka and Lucas Torreira as we prepare for Sunday’s test at Watford.

Massive talent, this boy… We ought to take care of him, and insert a 200mil release clause in his contract ?

500m if you want to ward off interest from petro-psg

Currently Douzi is worth 30 millions of euros on transfermarkt.

usually a club not looking to sell with x that base by 2 at least, if not triple it as an asking price for buyers.

right now id ask for 60m, but this time next year we all might grab at 30m or laugh at the measely 90m. football is a funny old game.

We need everybody fit and ready for a battle on Sunday. Watford with their new manager will be out to impress.
It seems like the majority of the time a team gets a new manager, their first game is against Arsenal.

It Is What It Is
Reply to  Thierry Bergkamp

Don’t forget the…
Debut goal scorer
First career goal scorer
Last career goal scorer
First professional hatrick
Newly promoted players
The strikers with better than 0.5g/game against us
The sub that scores within minutes of coming on
The first touch scorers
The guy making his first appearance of the season in April
Former spuds, Utd, Pool & Arsenal players
And then, there’s OG
And the cunt in the face mask, and the spud one that needs a face mask.
I’m sure there’s more.

Watford with Welbeck who has the habit to score in the first game against the previous club.

Welbz could fall into four of those categories, sheesh. He could also be the player that scores against us with his armpit hairs or the back of his knees.
It’s all over!

Is doing something once a habit?
In that case I am in trouble in a 100 different ways..

Southampton last year comes to mind, amongst a host of others 🙁

Matteo deserves all the credit for all the work and miles he’s put in. Would say he deserves(ed) the contract mooted a month or so ago. The boy takes no crap, can dish it out, and is just what we need at the base and in the spine of the team. Does most technical and tactical actions at a very high level, and getting there physically. Needs to be switched on for the whole 90. Especially with third runners and counter attacks. To think teams are spending 60m+ on similar, older players. Also impressed with how he has managed to… Read more »

Red-Sky
Reply to  It Is What It Is

Don’t get carried away. Even Matteo himself speaks of the need to improve tactically. He’s not doing anything “high level”, but he’s progressing nicely.

Wrap him up in bubble wrap! He’s been our best player this season!

I’m delighted he’s getting the recognition – let’s hope he stays fit and realises his huge potential with arsenal!

Of course guendouzi in the french national team is just a matter of when not what if, especially if he keeps improving. What more confusing, and the real question is why laca is not in the national team for such a long time no matter how good he plays. Not even good enough for their bench

i THINK and i mean i may be falsely remembering hear say, but im sure he was verbal about his lack of inclusion before the wc? and had a falling out with deschamps in return.
though i might be wrong.

Laca should be included. Two seasons ago when we still had Giroud, there was good reason why Deschamp did not have him instead of the OG. Giroud performed a function bringing in speedy assets (particularly Greizzman) from the flanks and was much better had holding the ball up. Over the last season or two since Giroud left, Laca has improved his hold up play and protection of the ball. This is impressive considering he does not have the height of Giroud. And it has been critical for us when he plays considering Auba can be a bit flagrant with competition… Read more »

Santori’s right on the mark. Deschamps sees Laca as more of a striker who can finish off tricky shots from all angles, not someone who can play in the guys just off him. Giroud is much better suited to that. Right now I guess the French like to be cute in front of goal.

More than Torreira, I feel Guendouzi is really the heir apparent to Granit. He has the maturity to match despite his tender age (barely ahead of Willock). He also has a bit of height on him but will have to beef up and be more competitive in that regard. AGAIN not many people understand the critical element Granit provides for this team. Partially because we have lost a bit of authority in the air since Mustafi is no longer involved (never mind other short comings), we now rely on Granit to drop back into a 3 to defend set pieces… Read more »

Seems like it will be unpopular but I think everyone needs to calm down a bit with him. He’s only had really one great game. Yes he is 20 and has a good potential. But let’s stop with the wave of ‘he is amazing’.