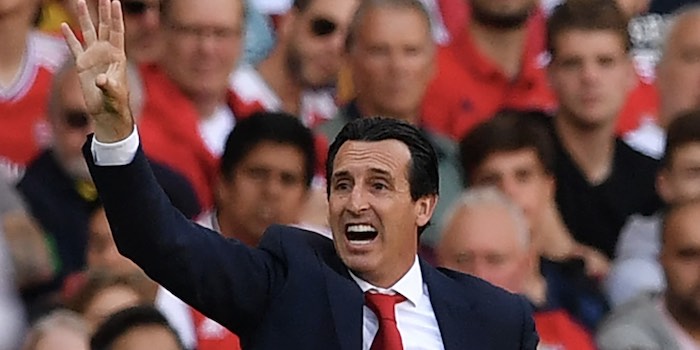 Unai Emery says that he will announce the club’s group of five captains next week following discussions with the team and his staff.

Of the captaincy group from last season, Petr Cech has retired, while Aaron Ramsey and Laurent Koscielny left this summer. It looked as if Nacho Monreal was going to be part of the set-up this season, but he too departed, joining Real Sociedad before the Interlull.

It leaves Granit Xhaka and Mesut Ozil, although the latter has yet to make an appearance in the new campaign due to off-field issues, illness, and simply not being used.

Speaking at his press conference today, Emery was asked about when he’d make an announcement over his captains.

“Next week we are going to take the decision on the five captains,” he said.

“We spoke about that with the team this morning and I am going to decide to make it official in the next week.”

Xhaka captained the side against Newcastle, Liverpool and Sp*rs, while Monreal wore the armband for the win over Burnley.

Many will wonder why we can’t just have one captain, but it seems apparent that Emery doesn’t see that nailed on starter + captain in his squad right now, so having it spread out allows him to ‘drop’ a nominal captain without it being a big deal.

Hopefully during this season a real candidate will emerge. As we move towards a new look Arsenal, the names of Hector Bellerin and Rob Holding spring to mind, while there’s no reason why Pierre-Emerick Aubameyang shouldn’t be considered either.

I guess we’ll found out next week.

i would kinda like to see Laca in there.. the passion is real in him

I totally agree.. I see Laca as more of an Arsenal captain than Auba.. Papa would also be a good candidate to be included in that captain squad in my opinion

What about Bella? Or Oza? Maybe even Torra? Guena? Hola’s back, as is Tiera. Maybe one of them-a?

Upamecano but downalego
Reply to  jans

Everyone’s going to be super stumped when he announces Fantastic, America, Blackbeard, Corelli and Underpants.

Laca would be great, but let’s be smart about this.
If we pick Xhaka, mustafi, and Ozil it will double their chance of leaving next season or fingers crossed in January.

A P
Reply to  Naked Cygan

Fatgooner it is then.

I also thought of Lacazette as captain, and as soon as I did I read that he is injured until October. Sorry, this is probably all my fault.

Abd what about Dani?

He’ll always be my favourite champion of the world.

The captain is Laca. Period. He is our leader now. No more nonsense about 5 captains please, Unai.

AMN should be nowhere near the captaincy.

Why not? With 5 captains it’s an afterthought anyway so what difference would it possibly make? We don’t have a Tony Adams right now so are picking people at random. AMN has a lot of fight in him and it shows. I fail to see why that should disqualify him from this meaningless captaincy.

They’re definitely not being picked at random

Lacazette for me, Clive.

Along with David Luiz

Can I add Ian Snodin to the mix?

With money on the line I would be hard pressed to disagree much.

I would just love to hear Bellerin with his spanish-tinged cockney conversing with the Ref. But will he go with him, or a CB like Papa?

I don’t get 5 captains. Where’s the accountability? IMO it should be Granit and Sokratis. I’d consider Leno and Lacazette but prefer someone closer to backline to organize and the keeper may need another year of seniority. Ozil IMO not a natural leader. He’s just naturally negative (glass half full) Granit has been improved over last season, takes responsibility. Some may have a fuss about his propensity for red cards (which is exaggerated) but Viera wasn’t shy of sending offs either or altercations with opposing players. AND Granit isn’t any less disciplined than say Sokratis. You can’t have your cake… Read more »

A P
Reply to  Johnny 4 Hats

Santori’s comment is much more constructive than yours, l’l Johnny.

Twatsloch
Reply to  A P

No it’s not because it’s Santori.

A P
Reply to  Shmokin'em

Good to know the limits of your reading skills.

The lack of capable captains in the team has been a trend ever since Vieira left.

I thought Fabregas was a great captain without many great players around him.

Was hoping he’d hold off the announcement until the week after Xhaka leaves.

Since he love playing out from the back.let the main captain should be chosen from the backline. Laca is a good option anyway.

I will love to see Holding and Laca as captain. On one side Holding is a academic product and I feel that making him captain will improve his game. On the other side, Laca is a genuine leader and has the capacity to force things to the right way when the opponent becomes tough to handle. Anyway I don’t like the idea of Xhaka becoming our long term captain. I don’t see his presence being inspiring in anyway for the team. How can someone become a captain and don’t even be inspired to improve his game is something out of… Read more »

An Academy product from Bolton!!

Oh, my mistake. Sorry about that. He has been around for so long and from a young age, I mistook him as a academy product. Thankyou for the correction.

Just have one captain. Lacazette

No room for your namesake? TGCTEL?

Laca is ‘de facto’ Captain. He our most natural leader. Give hime armband.

Five What for one abd vice captain

If I’m being honest, I find this a bit strange. What do we need as much as five captains for??? Just have a captain and an assistant and get this madness done with.

Emery is so weak he can’t even pick one captain.

The five captains are Xhaka, ozil, socratis, auba and holding