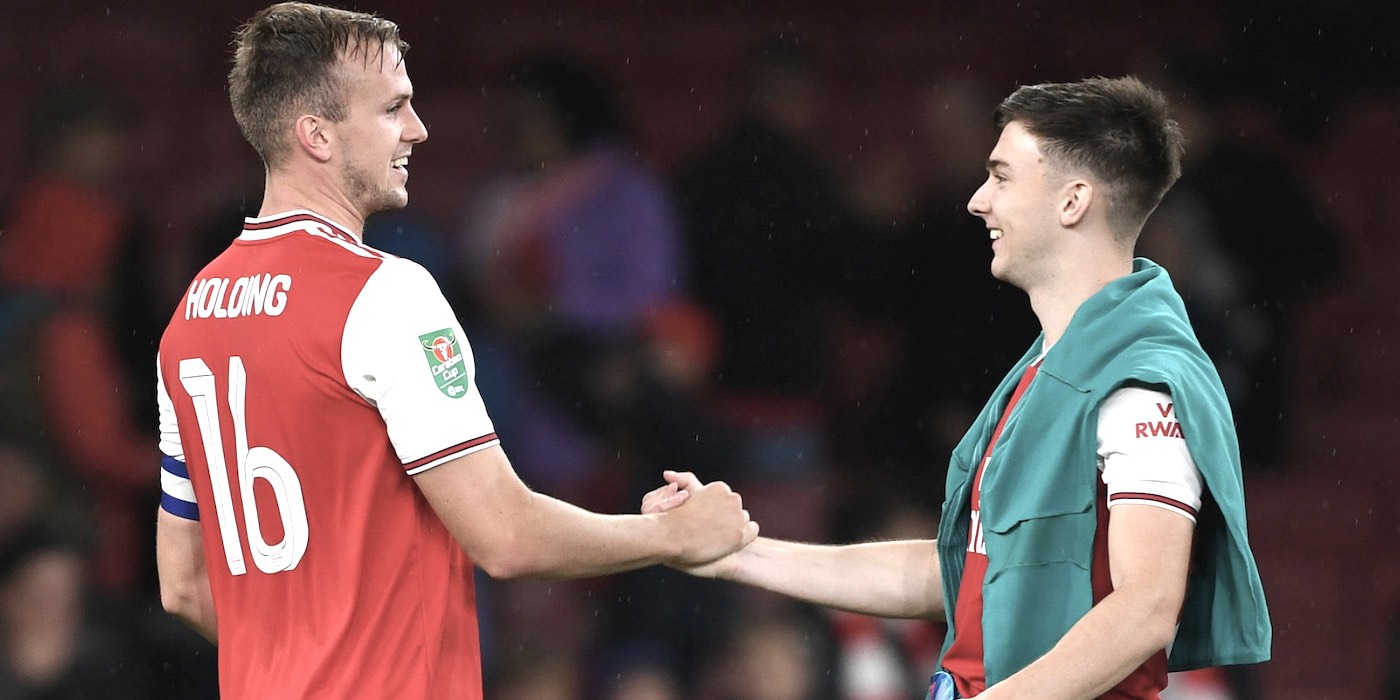 Arsenal fans feeling frustrated with the team’s defensive performances this season have looked at the returns of Rob Holding, Kieran Tierney and Hector Bellerin as something which will bring about an improvement.

Two flying full backs and a centre half who probably won’t do the stupid stuff the others have done provide a measure of optimism that we can tighten up at the back.

Holding and Tierney are in the squad for tonight’s trip to Old Trafford, and the Englishman is well aware that there’s some pressure on them to perform.

“I was speaking with Kieran – we were saying there is actually a bit of pressure on me, Hector and him,” he told Sky Sports.

“Obviously the fans have been putting a lot of pressure on saying: ‘We need those three back, hopefully they can perform’.

“So we had a bit of pressure going into the Forest game and the way we performed and dealt with it was great.”

The Premier League is a different beast to the Carabao Cup, and despite Man Utd’s poor form, the Gunners go to a ground they haven’t won at since 2006.

A record of just four points from twelve fixtures means that there’s a psychological hurdle to overcome, even if this current iteration of the Red Devils is as poor as anyone can remember for some time.

Holding also revealed he was left distraught at seeing Hector Bellerin suffer the same injury just weeks after he ruptured his ACL at Old Trafford in December 2018.

“I was sat with my girlfriend and I saw the video from TV in the group chat with my friends,” he said.

“I thought ‘oh no’. Because it was so raw for me it hit a spot and I got a bit emotional with it.

“I was two weeks post-op when he went down, I was sat up here watching the game and it was really emotional for me to see him go down, getting stretchered off and holding his knee.

“It happened so close together. For it to both be left knee, a weight-bearing knee for us. To go through the process with him made it a lot easier and I’m sure he’d say the same.”

Tierney & Lacazette back in training ahead of Villarreal clash

If we can get through to after the interlull with Bellerin and Tierney fit, Laca back and no further injuries we should be in good shape for the run in to Christmas. I remember saying pre-season given the shape of our back line I’d be happy to make it through to the end of October still in touching distance of top four; after the Watford result I forgot briefly but still think it’s true. Wouldn’t it be great to go and smash them tonight though..

I dunno that expectations are that high. We just expect them to maybe not pass to the opposition in our own area. Not get sent off before half time. Not hack people down in our box or jog back if caught up field.

Basically we expect them to do all the things that defenders get taught around age 7.

They’ll individually improve Arsenal, no doubts. Maitland is not a right back at all (not sure what he is) and Kolasinac is.. well, not a defender, so Bellerin and Tierney will help our sides. Holding too is a good player. However, none of that matters if the system is broken, which it undoubtedly is. No other team that I see that’s meant to be challenging at the top end of the table gets run over like Arsenal do, by whatever team they face. Even United, who are hopeless, don’t look as exposed as Arsenal do. Of course, we know that… Read more »

“However, none of that matters if the system is broken, which it undoubtedly is. No other team that I see that’s meant to be challenging at the top end of the table gets run over like Arsenal do, by whatever team they face.” This is exactly it for me, whenever Xhaka is one of the deep-lying mids against high tempo oppositions with pacey mids (most teams in the EPL – that is just the way the game is played here) we are a turn-style in the middle of the pitch. We get drawn up the pitch because of Xhaka’s lack… Read more »

I remember saying the same thing during Wenger’s last years – that our midfield wasn’t making enough tackles in the midfield and whenever the opposition gets the ball they end up in our end pretty quickly. And he found Coq and that worked for sometime until suddenly Wenger decided that Coq needs to play further forward to break attacks in opposition half which worked when Santi was playing. Unfortunately Coq wasn’t the greatest of passers & santi was injured very frequently and once again we were passed over in midfield too easily. We are seeing something similar now, hardly any… Read more »

Another Paul
Reply to  Dave M

Guendouzi and Torreira have no recovery pace. I agree that it doesn’t excuse not making an effort , just pointing out that even if they do sprint back they will never catch up once a man goes past them…
Willock is different…

Dave M
Reply to  Another Paul

I think you have xhaka mixed up with torreira and guendouzi.

It’s time to break the old Trafford hoodoo, because 13 years is a very long time not to win in that ground.
I remember that Fabregas assist and Adebayor goal like it was yesterday.

So I beg you Rob please bring back that feeling.
I honestly can’t stand man u fans anymore thinking they can whip us anytime they want even if they’re that weak. And this time feels as good as any.

When they settle in, they should be permanent fixtures in our EPL squad.
Two natural full backs – and speedy ones at that – should give opposing managers food for thought.
Holding, Chambers, Luiz and Sokratis should fight for the two spots. The realisation that two decent dudes are waiting on the wings should bring out the best in any two playing at a time.

No pressure boys, just win the remainder of the games and we’ll be alright

United away usually makes me nervous for days in advance, but I’ve been unusually calm + confident all week, I quite fancy Aubameyang+Pepe up against Maguire+Lindelof. A point is a good result, but I fancy us for all 3, United are there for the taking. I don’t think we’ll see many changes from Villa or Watford Maybe Chambers for Niles, and Torreira for Saka, with Ceballos moving out to the left. I’d be surprised to see Holding, Tierney or Bellerin start in the league before the international break, but having these 3 breathing down the neck of our current lot,… Read more »

How many long term injuries have Arsenal had over the last 10-15 years?
In 2014, 889, over 300 more than Liverpool.
Spuds 785, Everton 663, ManC 595, ManU 791.
Coupled with the media “hate” against Arsenal at that time, it makes for interesting speculations. How many of our KEY players have had devastating injuries that upset the team flow and caused the loss of an important player.
Lets see a new Arsenal now, nimble but unafraid(still a bit of fear there(is that what Xhaka meant?) lingers) in the challenge by some Arsenal players.

We have 2 lb with first name as kieran

“A weight bearing knee” is that because they’re right footed and this plant on their left to kick?