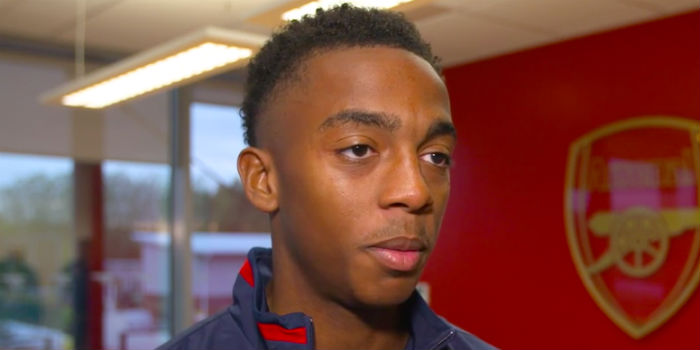 Joe Willock says he wants to play week in, week out for Unai Emery and believes he can score more goals and make more assists if he’s given the chance.

After an impressive start to the season, Arsenal confirmed this afternoon that the England under-21 international had been rewarded with a new long-term contract.

Having been at the club since he was four and a half, Willock, the youngest of three brothers who all started at Hale End, is very much ‘one of our own’.

“As a young boy growing up through the academy, I’ve always wanted to play at the Emirates and play in front of the fans and stuff,” he told Arsenal.com after penning his deal.

“So to do it, it’s only right in my heart and my mind to know that this is the right club for me. And to carry on my own future here is brilliant.”

“The manager has put a lot of faith in not just in me but in a lot of youngsters so far already this season. It’s so encouraging.

“In training every day he is encouraging us and to play in front of the fans with my best friends is amazing and I’m just trying to play my best and continue every day.”

Willock also identified the areas of his game that he’s eager to improve.

“I need to continue working hard and striving to play at my best,” he said. “I feel like I can add more goals to my game and more assists and keep on affecting the game in the best way I can and helping us to win. So yeah, I feel like I can score more goals.

Here’s hoping it works out.

From Anonym Arse to Will Power, hmmm…

Torreira, Guendouzi, willock and hopefully Ceballos and we are set for the future

This guy is really amazing. Hope he continues to grow with us free from injuries, finally we have players with the arsenal DNA. (Niles, Saka, Nelson, Holding, Willock, Eddie, Emile, Chambers) wow. Good times ahead indeed

Zidane picked him out for special praise after the friendly against Real. Good to have an extension.

Xhaka + Torreira apparently carrying knocks? Could be looking at a midfield three of Willock, Guendouzi, Ceballos against Watford, Emery is moulding this team into a high energy, high tempo outfit.

I still think he’ll need another 12-18 months, but the signs are promising, the characteristics Emery looks for in a player is clear, and Willock fits the mould.

Definitely a plus for us this season. We needed to add a player in midfield who could retain the ball better for us and work out of deep area through congestion. We got Cebellos (albeit on loan). Not Santi but a player with tidy feet none-the-less. BUT we got a bonus from Llungberg’s academy with Willock. He has continued to develop taking a page off of (the only slightly older) Guendouzi. And he ahs brought energy and verve not to mention quick feet to add an extra player to work us out of midfield. As with opening game ad without… Read more »