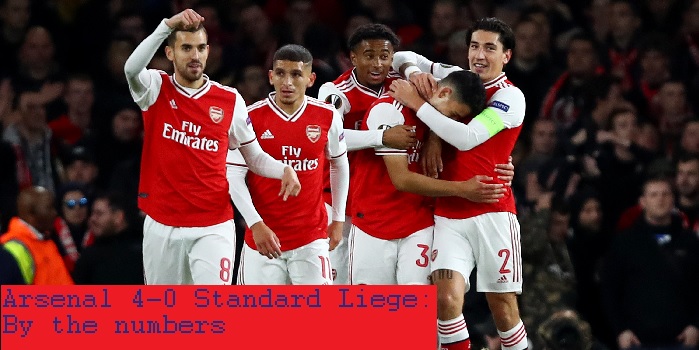 It took me over 20 minutes to get this match going thanks to Bleacher Report having massive technical difficulties with their streaming system (I for one love to pay for subpar streaming options, I have no idea why people resort to dodgy popup filled streaming websites) but once I did get things going this was easily the most enjoyable Arsenal match of the season for me.

Arsenal seemed well balanced, the young attacking players looked really good, it was exciting to see key players returning from injuries and Unai Emery let his team keep attacking a team while Arsenal had a lead!

Arsenal 4-0 Standard Liege: By the graphs 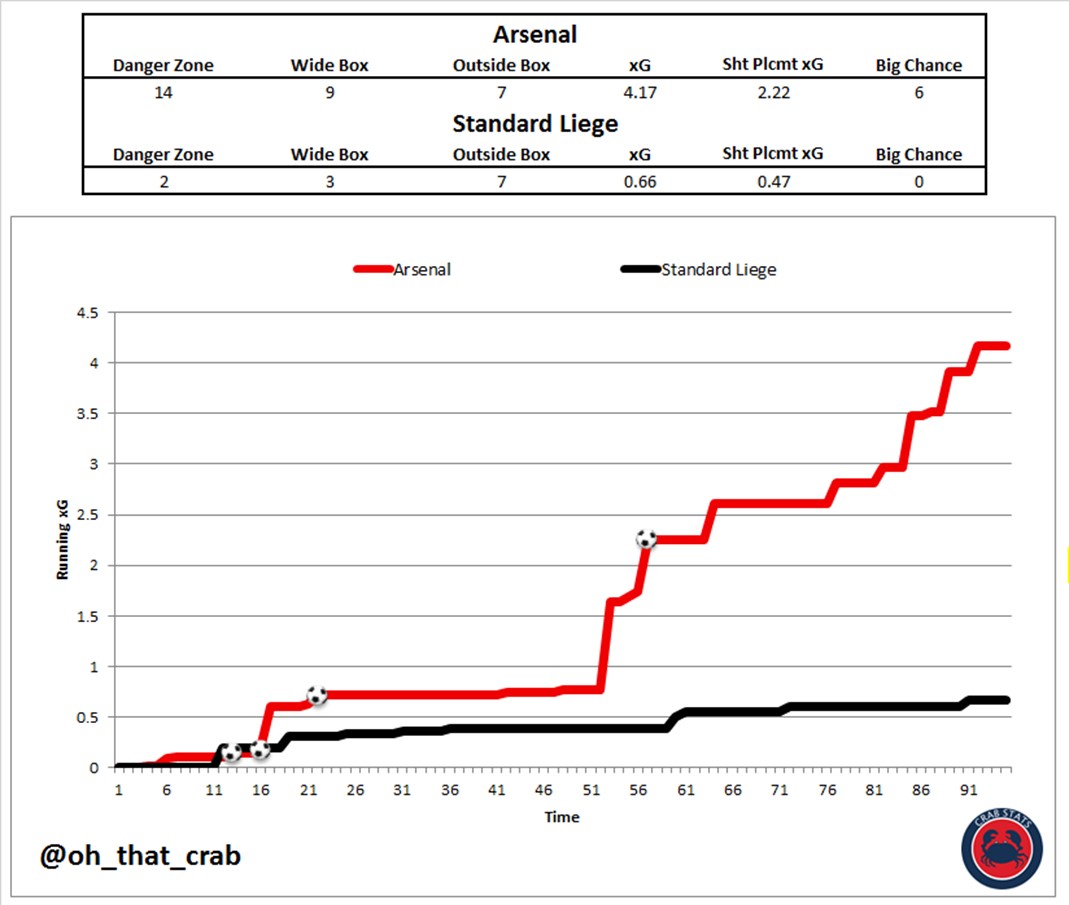 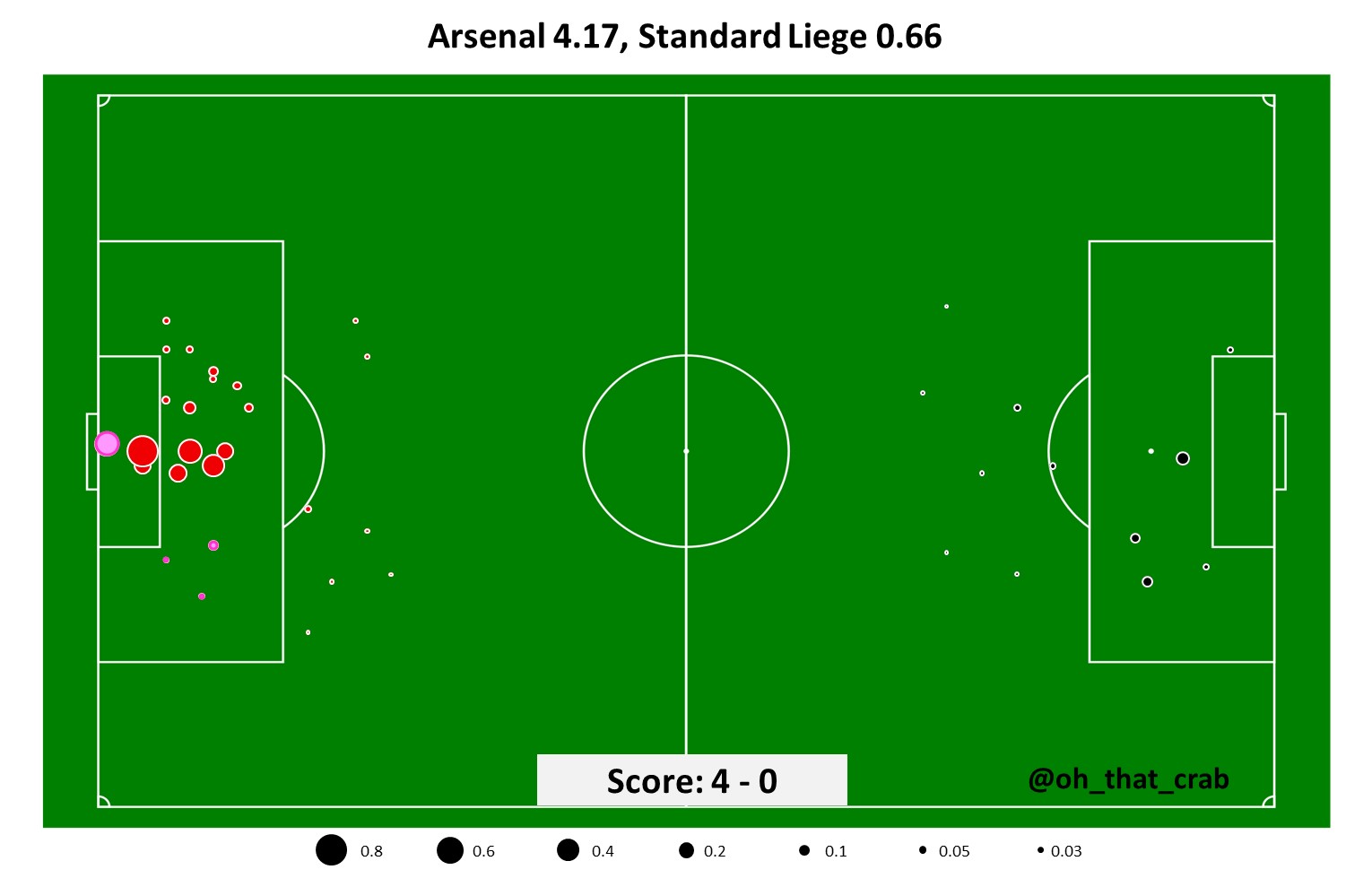 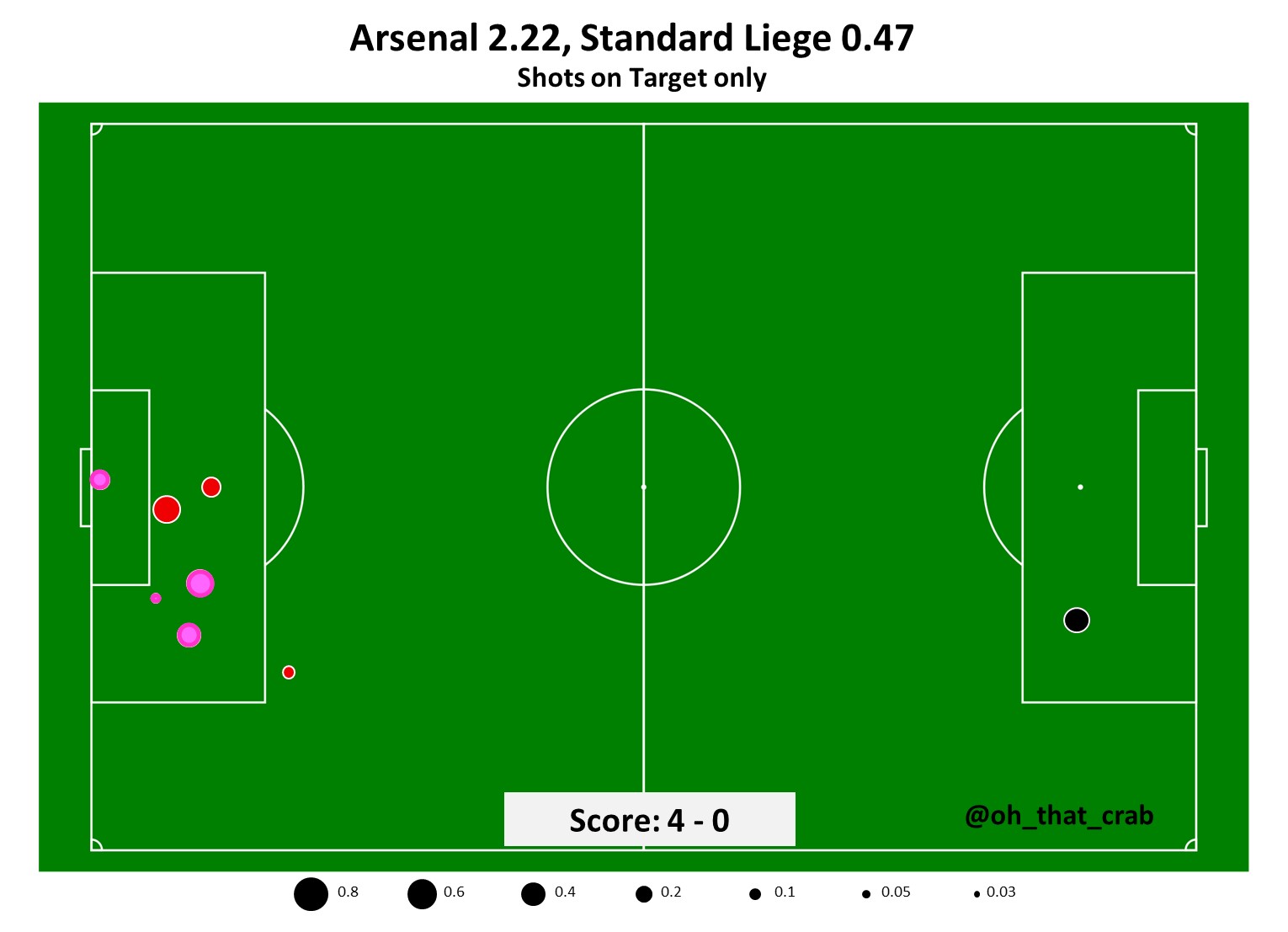 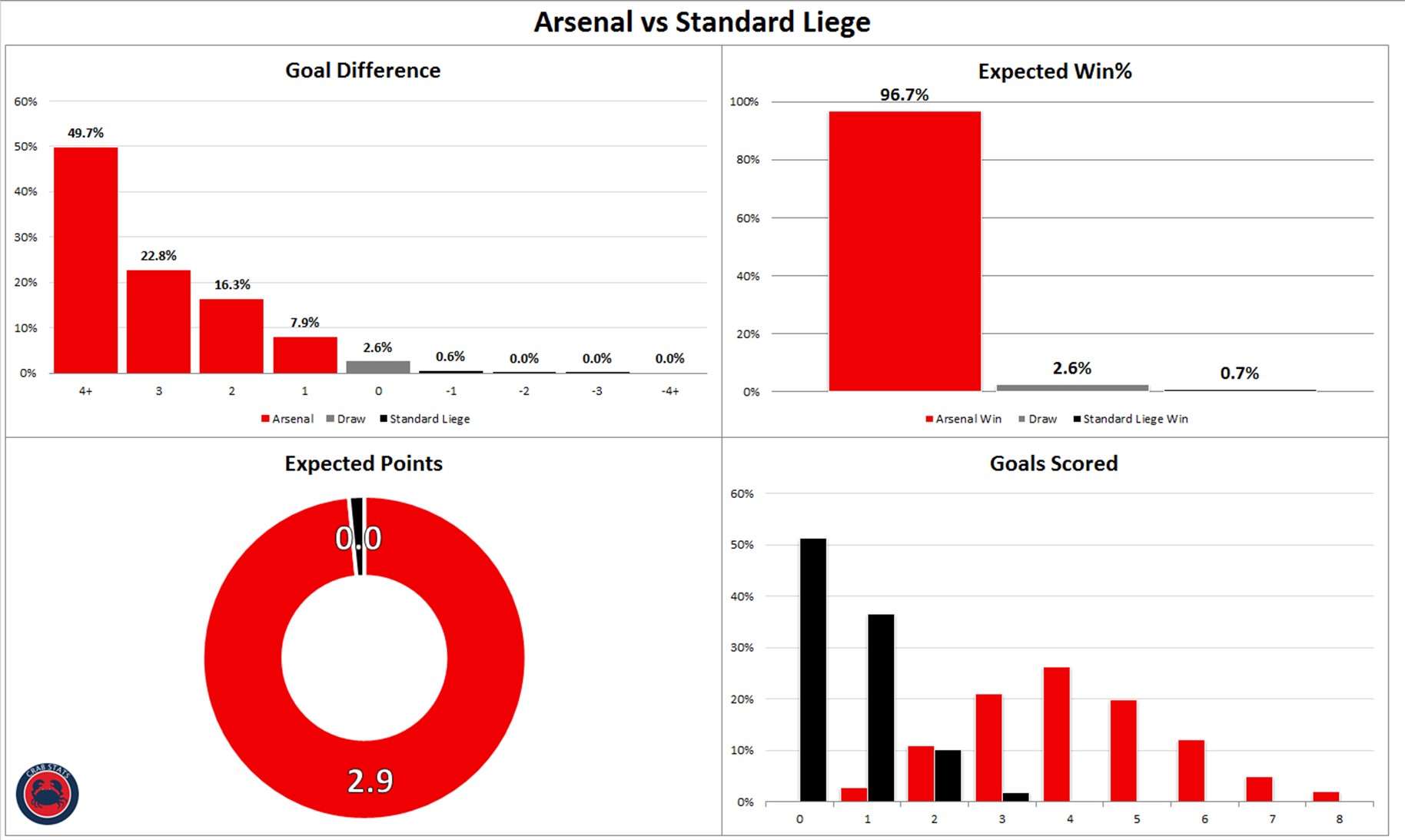 Arsenal 4-0 Standard Liege: By the numbers

3 – Shots on target for Gabriel Martinelli, led all players

2 – Big Chances created for Gabriel Martinelli, tied for the lead

1 – Assist for Gabriel Martinelli, tied for the lead

2 – Dribbles completed for Gabriel Martinelli, tied for 2nd among all players

3 – Tackles for Gabriel Martinelli, tied for 2nd among all players

There isn’t too much that needs to be added in the form of analysis on this performance. The stats and just watching how Martinelli played is more than enough to see how good he was. The harder part is to not get carried away with the hype after a performance like this and honestly it is very hard because this was a very good all around performance from a young new signing with loads of potential, basically he checked all the boxes of get the bandwagon growing exponentially.

Arsenal take an early lead and then continue to dominate

3.5 – Expected goals for Arsenal, with all 6 big chances coming after the score was 3-0

137 – Final third passes completed for Arsenal, including 14 included inside the box

39 – Final third passes completed for Standard Liege, including 4 inside the box

One of the more frustrating things about Arsenal under Unai Emery is that when Arsenal take a lead, they have more often than not looked to protect it instead of expand on it. With a defense that isn’t a strength there is a certain logic to that but it also invites teams to attack your weakness while downplaying the great attacking talent in the team. In this match, Arsenal clinically finished their early chances and then looked to add on more goals. One of the things that really helped was that the midfield looked to have great balance with Dani Ceballos and Joe Willock providing great options with Lucas Torreira deepest. Having two true fullbacks who were comfortable in the buildup was also a great help as Arsenal seemed at their most technically secure of the short season. Speaking of fullbacks…

4 – Chances created including 2 big chances, 2nd among all players

Kieran Tierney looked like everything that Arsenal could have asked for when they signed him from Celtic in the summer. He was technically proficient on the ball while also showing a good understanding of spacing to find openings as a passing option and to carry the ball when Standard Liege pressed. His passing was very good, with the speed that he got the ball to teammates and his ability to play dangerous crosses. He didn’t have the hardest task on defense but overall he looked very capable and overall this was a part of Arsenal’s best defensive performances of the season. Hopefully he (along with Hector Bellerin) helps to bring more fluidity to the Arsenal attack while strengthening the Arsenal defense.

This was a smart transfer window. Not just with recruitment but also with departures. Departures of Iwobi and miki has opened up spaces for youngsters. On loan nketiah is thriving while Martinelli is prospering here.

I am more excited with Kieran Tierney he was good, Proper full back good attacking, good defending, you may think he wasn’t attacked no he was, it is just his positioning is top notch he makes dangerous balls look really easy, his side was the most productive every player seems to follow him. Also I guess Bellerin is couple of weeks away from full fitness he looked off Pace, but all good Sign. AMN is under a lot of pressure you can see even when he was taken of he wasn’t happy. He really need to step up his game… Read more »

Shout out to Holding too who waa simply majestic throughout.
He, along with Mustafi!, were assured and brilliant.
That Mustafi’s crossfield pass that led to the first goal was glorious.
Holding is ready to dislodge one of Luiz and Sokratis.
Has Mustafi played himself back to EPL reckoning? Those above him are not pulling up trees.

Arsenal fans have very short memories….. Mustafi, just like Luiz + Xhaka are error prone, 90% of what Mustafi does is excellent, but the amount of brain farts he has is unsustainable. Hopefully we can pick up £15-20mill up for him in January. Sokratis+Luiz aren’t pulling up trees, but Mustafi is still behind Holding, and it looks like Emery prefers Chambers as an option to Mustafi as well, with Chambers being kept for the PL this weekend. Emery has drawn judgment of Mustafi, leopards don’t change their spots, Mustafi is now into his 4th season, and Emery’s attempts to push… Read more »

Well, one thing I have learned over the years is: Never say never. Right before our eyes, Coquelin came from the brink of an inglorious exit to become a mainstay in the midfield alongside Santi. Things change quickly in football. City have lost 2 centre backs this season, and suddenly Otamendi – a man as reliable as Mustafi – is playing the big games. I am not saying we are going to have that here, but you never know. For me, as long as Mustafi is earning wages here, and is willing to put in a shift when called upon,… Read more »

My good mate is a City supporter. They had the same issue a few years back with Mangala; he was fine 95% of the time but 2 or 3 times a game he would show bad judgment. Some of the time it wouldn’t amount to anything – like early on last night when Mustafi made a bad pass and it was intercepted about 35 yards out – but some of the time it would result in a goal. The problem is that those moments happened too frequently and, rightfully, he was benched. UE has done the same with Mustafi, and… Read more »

Credit where credit is due. That Mustafi long ball over the top to set up the first goal was quality. On of the best Arsenal long passes Ive seen from any player never mind a centre back. Maybe we should give him a chance in defence if Luiz and Sokratis keep messing up.

4 – goals for Martinelli this season so far.
5 – goals for Alexis Sanchez in his entire man u career.
Just saying.

No one is asking for Mesut ? Awwww

This is what happens when Emery’s little lamb- Ganduzi doesnt play and gambol around in the midfield, weakening both our attack and defense. Midfield is key.

Has he not been one of our best players this season? not sure you are picking on the right guy

You are like a bitter Roy Keane calling Viera a squad player.

Scourge of Goooner
Reply to  shaka

Guendouzi is literally our best midfielder right now ffs, nice of you to acknowledge it’s very much Emery who has developed him since signing though.

this is a downright delusional opinion.