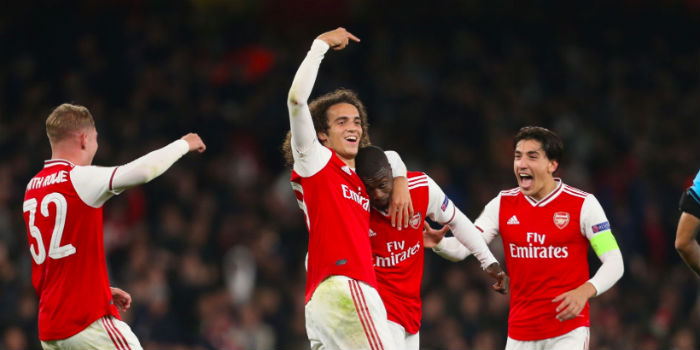 Hector Bellerin says Nicolas Pepe will take huge confidence from his match-winning brace after the Ivorian came off the bench to help Arsenal to a dramatic late 3-2 victory against Portuguese side Vitoria.

The £72 million summer signing has struggled for form since arriving from Lille but this evening felt like a turning point in his Gunners story as he netted two stunning free-kicks in the space of 12 minutes, the second with virtually the last kick of the game.

Prior to that the Gunners had twice fallen behind in the first half, Marcus Edwards and Bruno Duarte scoring either side of Gabriel Martinelli’s header.

While there remain plenty of questions about Emery’s side, Bellerin, who captained the side, made clear that you can’t always win pretty and that individual brilliance is to be welcomed.

“We know what he [Pepe] is capable of because we’ve been training with him for a long time,” he told Arsenal.com.

“Also it’s important that goals can sometimes come from individual actions. We want to play as a team but sometimes you need these players to produce these moments of magic. That makes you come from 2-1 down to win 3-2, so it’s important for us as a club to know that we have these different resources.”

He added: “It’s important as a team to be able to win games that evolve in different ways.

“But we managed to turn it around so it’s very important for the confidence of the team to see that we can win every single game even if things are against us, or in our favour. I think we can take a lot of confidence and good spirit from this game.”

Bellerin also admitted that Arsenal are currently falling below the standards expected of the club when it comes to keeping the ball. That said, he’s eager for his teammates to keep playing their game in the hope the mistakes are ironed out.

“There’s loads of things we’ve got to improve as a team,” said the Spaniard.

“Football keeps evolving and there are different rivals, different things that you’ve got to do in different games.

“I think that we had to keep the ball better but that’s our trade. We want to play football and you know that when you try to play football, sometimes you’re going to make mistakes. That doesn’t mean you’ve got to stop playing that way.

“We have a style of play, it’s in our DNA, and we want to keep playing like that. We’re human, we’ll make mistakes, but we need to keep pushing. Playing in the same way that we tried in the first half, in the second half we found the holes.

“That’s how it works: you need to keep pushing and doing what you believe in, then towards the end everything falls into place.”

More like every Thursday with Emery still at the helm

I’d love it if we relied on an effective, productive game plan, but who doesn’t love a little magic!

Yup, it masks all the shortcomings of our manager!

Hector’s always a class act. Looking forward to seeing him be back 100% and form a partnership with Pepe

That’s the thing. Emery should’ve been easy on Pepe. He needs to ease himself into the first team as he is still adapting by playing cup and europa games to put off pressure on his shoulder because of his price tag.

Emery is actually world class at managing new players/injured players and easing them back into the team. Think about how many times players were rushed under Wenger. The problem is of course…Emery’s lack of clear game plan and his love/hate relationship with xhaka/ozil

if he did that the fans would be talking shit about why did he get a 72M player if he’s not gonna use him in the PL..

It’s the exact same situation with Tierney and Bellerin; he’s trying to slowly ease them back but fans these days are just too impatient

Glad for Pepe but it masks a more serious issue

Small steps. OTOH good to see Mustafi have yet another good game most people will pretend did not happen. great slide rule pass to release Bellerin for martinelli (not the only one he played), solid enough defending and three headed chances which if you listen to BBC you’d be lobotomized into thinking he was appalling. His kick on the post for the third header missed shows a player eager to restore reputation. As I mentioned before, there should be no certain starters. If players like Holding, Tierney, bellerin or Mustafi are showing both apptitude and solid performances, then they should… Read more »

It is interesting that Mustafi, who had a very good game (with much more pressure than in the previous Thursdays) gets mentioned for his missed attacking chances. Holding, who was turned rather easily for their first goal, escapes criticism. I still want Holding to start in the league, not Mustafi, but that shouldn’t be written in stone. Given his past mistakes, Mustafi still has a long way to go to convince me he is reliable (I have never doubted his talent), but I suspect he will never be selected, no matter how well he plays. Maybe that’s why Ozil isn’t… Read more »

He pulled the rabbit out of the hat for us Pepe. There was effort second half but still too uncontrolled. That said, as mentioned last game, I said Unai needs to show a more demanding side to him. He looked pissed even when we scored the winner bc rightly so, we made a meal out of it. Subbing out Willock and AMN sent a clear message. Doesn’t matter how much you earn , how experience or inexperience you are, you make a mistake …you’re out. IN AMN’s case I like the bloke but those calling for him to play his… Read more »

Seems to me you just like to be controversial for the sake of it.

Emery is a shit coach, simple. Plays Torreira out of position. Plays Xhaka in double pivot with Guen, Xhaka is a slow plodding pass it out wide or back midfielder, too slow for the PL. Plays Kola over Tiereny, could have played Tiereny for 45 against Sheffield if he couldn’t play 90. Plays Ceballos as a 10 when he’s clearly better as an 8. As a team, our stats are moving in the wrong direction, he hasn’t improved us, as a team. I was patient last year with the new coach although there were plenty of warning signs. Patience is… Read more »

We need individual magic every match to win under Emery.

Thank God for Pepe. He may need alittle more time to adapt to epl. Pires,my favourite player,took at least ayear. You could see the result when the fm finally got to grips.
Hopefully Pepe wouldn’t take too long.And by now teams would be wary of giving freekicks to ArsenalThere are no games especially in the epl. Arsenal better be careful of Saints.