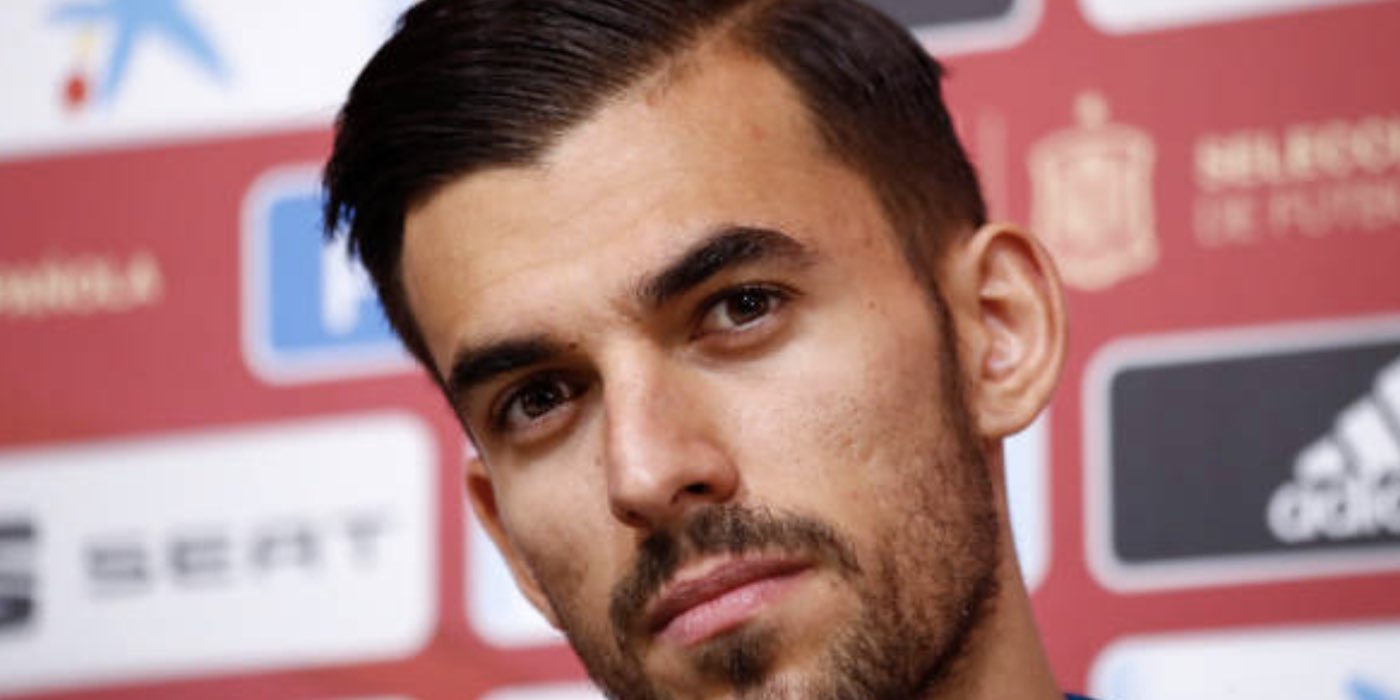 Dani Ceballos is a doubt for Spain’s upcoming international against Norway due to a hamstring strain.

The midfielder, on loan at Arsenal from Real Madrid, was withdrawn from training but the good news is that it is said to be precautionary rather than anything too serious.

AS report that he’s had a scan which shows a tight hamstring but no serious strain, and he is expected to be fit for Tuesday’s game against Sweden.

Arsenal fans will be keeping fingers crossed that it is as trivial as they say, as the 23 year old has impressed this season and is the only player to have played in all 11 Gunners fixtures this season.

Earlier this week, he spoke about his decision to come to North London from Madrid, and was pleased at the way things have gone so far.

“”I’m at Arsenal right now and I feel very good,” he said.

“I knew I definitely wanted to leave – I was right to leave Madrid. Right now I’m where I want to be, and I am very happy. My idea was to leave, play and enjoy football.

“Over the past two years I have not done that. I was right to go, seeing as I’m in the Spain squad.”

So.. Err..Dani boy, how about missing that flight to Madrid in May? The Queen would sort out your passport issues.

I’ll say the same thing I think in every relationship I’ve ever been in.

If we love them enough, they’ll stay.

Guess there was just not enough love hey helder

Hope he comes out unscathed from international duty as with the rest of our players. Have really liked what he’s brought to the team and his overall play and there is certainly more to come. Although I do think he’s far more of an 8 than a 10 based of what I’ve seen. He would much rather come looking for the ball, wriggle away from defenders and drive forward rather than finding pockets and floating in space in between opposition defense and midfield. Still need a proper 10.. which for all you want to say we still have Mes but… Read more »

Out of interest, how would you set up the team with laca auba pepe and ozil? Auba on the left wing? or some kind of 2 up front formation?

Everyone healthy.. Leno Bellerin Holding luiz/Holding tierney Torreira ceballos/guen Pepe ozil/Willock auba Laca I realize a few things. 1: we’ll never see this line up. 2: very attack minded and could very well be susceptible to leaking goals, but we do that now anyway. These players are fully capable keeping possession which takes a huge strain off of our back line. Ceballos for me has just enough bite and grit to play alongside torreira deeper but also so good at getting away from opposition mf and driving forward. The front 4 speak for themselves. Enough ability to be dangerous on… Read more »

Luiz/chambers. 2 holdings could be interesting lol

I missed that anyway 😉

but yeah our CB defensive pairing is another situation where we have experienced options but they are on the wane, and the young guys are not experienced enough to bank on.

Holding Mustafi combo might be the best physically, Luiz and Holding could be good for a season but I feel like Luiz has a case of the Mertesackers, Holding and Chambers just doesn’t feel right but might be good enogh. Soo Sokratis and Holding for the win? or the greek combo of Mavros and Sokra?

Yeah it’s a solid lineup creatively, but I think there are huge differences with just a small change in midfield. Assuming our attacking 3 are decided, and our back 4 play into some kind of defensive form, the 6 or so players we have for the middle 3 collectively have great attributes individually for going forwards and finding a pass, but very little steel and defensive nous. Ozil is most guilty of this, but also Guendouzi and Xhaka find themselves out of position or let their man go in crucial situations. If you have Ozil you have to control the… Read more »

Just looked at all our international’s fixtures over this break. All look like relatively easy opponents, aside from Uruguay’s home and away against Peru. Hoping that Pepe especially can do some damage against DR Congo and Niger so that he can come back with a bit of confidence!

Slight injury? Precautionary? Plays for Arsenal? See you in three weeks Dani. Hey with Ceballos and Nelson injured, Ozil might even get a place on the bench in our next game. Oh hold on, away, Sheffield, night-time kick off, maybe not.

Since Unai came, it is 350K from fans pocket that goes down the drain every week. I said here that Man U was able to send Sanchez on loan and we tried nothing with Ozil and got voted down copiously. What are we preparing to do in January now?

Er… ManU only managed to loan out Sanchez by agreeing to carry on paying his wages.

We tried with Ozil but nobody wanted him. That’s the bitter pill you must swallow.

Chance that he is going to the U.S. in January, that remains our best bet and still likely we will be on the hook for some of his salary..

No, the Mail and arsenalfantv say nobody wants Özil but the truth is that Özil doesn’t to leave. There are also men willing to decide their lives in this affairs and if the message from the player is not “I wish to leave”, nobody will come to pick him up.

Yeah sure. Why would any top team ever play ozil? All of them have midfielders who not only attack but defend.

Ozil wont even get into brighton or mewcastle’s starting eleven. Ozil is the most overrated flop in football history.

s**t, i wondered where that 350k in my back pocket went

Funny as a news about our Spanish loanee brings Özil on the table… missing him, guys?

The news is linked as with Ceballos (and Nelson, and still Lacazette) injured, Ozil can and probably should be utilised in the squad. Perhaps I’m getting ahead of myself but that next game at Sheffield United is a potential banana skin if they put 10 men behind the ball. Saka and Martinelli may struggle in that one. Actually even Pepe to be honest the way he’s playing right now. Really could do with Ozil at least on the bench.

I suspect Ozil has actually died and they are using CGI for training pics and when the camera pans to the bench.

Ceballos been a terrific loan signing. I just hope that we can make him permanent. The problem is that with every great performance, his potential signing-on fee increases. Shame. Subject change: I’ve been deeply disappointed by the savage criticism of another one of our recent signings,Nicolas Pépé. Some people on this site and others, and in particular AFTV, have been laying into him. Not fair. Pepe needs to be given some time to find his feet. Coming to a new club and country must be very difficult. I remember when Dennis Bergkamp first arrived: it took him a while to… Read more »

Fatgooner has gone soft. Weird one this is… ?
Pepe’s savage criticism is indeed dissapointing though. Dude needs our support. Too early to jump on his back really

Beware Pépé that Fatgooner will shred you into pieces if at the end of the season, you,re still not ready to prove you’re a worldclass player. Fats run out of patience with the manager in the middle of his first season.

And I was right. Even the owner of this website agrees that Emery isn’t the right man to take us forward.

Far too early in his tenure with us to be writing Pepe off.

Honestly at 71 million i can’t see how a club can make that investment and be wrong. The data must have been hugely in his favour to the point it’s undeniable. He just needs to get closer to the full back because 1on1 he’s undeniable, gets past the first man and he can start slotting them away.

I too have been left surprised by some of the fans’ reaction towards Pepe. And even though he hasn’t set things on fire yet, there have been moments when he has really looked good. I don’t expect him to be scoring goals like he did in Lille (those were exceptional numbers for a winger in an inferior league, and if fans expect the same numbers they’ll be left disappointed). What I expect from him are those mazy runs that can open up parked buses more consistently. He has already done that a few times, and definitely should have had a… Read more »

I’m sure Pepe will come good, but it would help if he wasn’t left isolated and expected to dribble past three or four defenders. I can’t think of many coaches who set up their team in a way that doesn’t suit the majority of their players.

Meanwhile novice and inexperienced 18 y/o Saka in the same system is going nicely.

I AM ARSENAL
Reply to  Fatgooner

Don’t spread misinformation literally one guy and a few of the younger kids they interview on Aftv have said Pepe is shit etc…90% of the interviews are saying to give him time and how it took a host of some of our greatest players entire seasons to settle in.

Hey, wtf did you do with fatgooner???

He also appears to be suffering from acute handsomeness