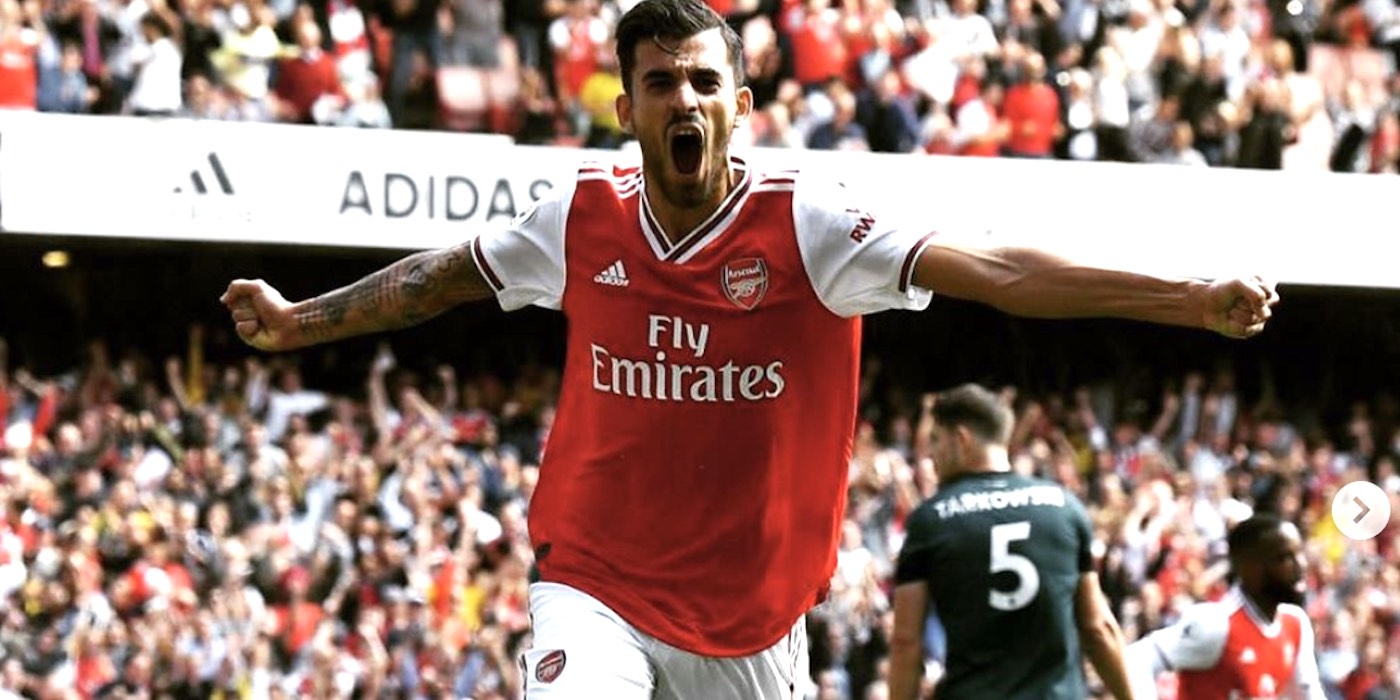 Dani Ceballos has opened up on his decision to leave Real Madrid last summer, and says that he’s exactly where he wants to be with Arsenal.

The midfielder was set to face a frustrating campaign after the return of Zinedine Zidane as manager – the Frenchman was not a fan during his previous reign – and in order to play he knew he had to go elsewhere.

So far his time in North London has been positive, he’s connected with the fans, and got his first Arsenal goal in the Europa League win over Standard Liege last week.

Speaking in Madrid, where he’s on international duty with Spain, he said, “I’m at Arsenal right now and I feel very good.

“I knew I definitely wanted to leave – I was right to leave Madrid.

“Right now I’m where I want to be, and I am very happy. My idea was to leave, play and enjoy football.

“Over the past two years I have not done that. I was right to go, seeing as I’m in the Spain squad.”

Ceballos has featured in all 11 Arsenal fixtures this season – the only player to do so – so he’s obviously well liked by Unai Emery.

Let’s hope he returns from the Interlull ready to add to his goal and two assists.

I think he was right to leave Madrid as well (duh!), and he’s welcome to stay at our place for as long as he’d like – especially if he drops his diving antics. So much talent.

He’s a bit Busquetty in a good way.
Hope he sees his future with us because with Ozil leaving come January or May and Guendouzi/Willock playing box to box, we will need Ceballos or someone with creativity and guile next season.

Good signing so far, Burnley game was his high just like how the Liverpool game was his low. But he has improved very well after that. Long may his development continue with us.

Ceballos can’t be the creative hub you so desire.

Underrated player, I don’t get why some have already written him off. Almost never gets dispossessed, good with both feet, great balance, can spot a pass and does the dirty work as well. See 11 ball recoveries last game.
Away at Liverpool was a joke of a tactical setup that had him exposed at left mid/left back covering Salah miles from any team mates. Yes he’s had a couple of risky passes across the defence, but they are exceptions not the rule. I think he’s a fantastic addition who’s always positive and ups our midfield tempo.

I agree with everything there. The only thing I’d query is the “good with both feet” bit. I’ve no idea if he’s good with his left because he’s the most one-footed right-footed player I’ve seen play for us since Cesc Fabregas. He probably is decent with his left, if only he chose to use it!

I really like him as well. Fantastic technique, moves the ball quickly, can turn away from trouble and switch play. Although he works hard defensively and is surprisingly strong for a slender guy, he is not that mobile nor a natural tackler (like Ramsey), so I prefer him in a number 10 role to a number 8, as not convinced he offers much protection to our defence – he is good as a high pressing midfielder though. Might be interesting to see him in a wide playmaker role as well, which we could do once our first choice full backs… Read more »

Spot on. Who downvoted that?

The Spoon
Reply to  Best of John Lukic

Sign him up before Madrid get a new manager. I think in 6 months once he’s fully settled he’ll be a hell of a player.

Dave M
Reply to  The Spoon

So with respect to the hypothetical in the arsecast extra… Would you sign him for £40M?
I would. I think he’s going to be world class…

If he plays a big part in getting us into a CL position and or winning a trophy? 40M will be money, more than well spent.

it’s early days for all of them, but a midfield three of Willock, Ceballos (be nice to sign him), Guendouzi has a really nice mix of skill, athleticism, and goals.

There’s nothing athletic about that midfield trio. If you include Torreira I’ll consider. Our best midfield combination will be Torreira, Ceballos Guendouzi/Willock.

Willock is surely athletic. Guendouzi and Ceballos will only get stronger physically and both have a bit of bite in the tackle. I personally like that trio but having said that I’m a fan of Torreira too

You and I obviously have a completely different definition of athletic. I think Torreira’s biggest weaknesses is his athletic ability. He is very small and struggles to impose himself/keep up against physically superior players. I think Willock and Douzi are both naturally athletic and get up and down the pitch very well, they can both travel with the ball very well and are 19/20 years old.

I agree on Torreira. One of the major downsides of him playing high up the pitch is that his lack of any recovery pace takes him out of the game every time the opposition breaks on us.

He seems to be Emery’s answer to the Ozil problem. Definitely has more bite than him, seems quite passionate too, someone who can connect with the fans. Doesn’t sound like he wants to go back, I’ll have him as an Ozil replacement tbh. Loved Ozil here but I think the club has moved on.. quite ruthless but not very classy imo..

No not classy at all

I AM ARSENAL
Reply to  Anonymarse

I think the club and previous manager have been too soft for a very long time. I don’t agree with the way Ozil is being treated but I almost respect the club for becoming more heartless In a way.

John
Reply to  I AM ARSENAL

Ozil is being treated extremely well. We are paying him 350k a week!

Ozil hiding behind his PR team appealing to fan emotional attachment to the club and his hiding on the pitch are not classy either. The club “ruthlessness“ towards such a player his what we need . Hope it shows on the pitch now.

Bit lightweight at present. Cant play him and Guendouzi together until we get a big defensive midfielder instead of Xhaka. How old is Gilberto Silva and what’s he up to on Saturdays?

The Spoon
Reply to  Mick Malthouse

Must be due another link to sami khedira…

God knows! But when do WE play on Saturdays anymore!!

Another Spanish loanee for UE again for a position where we didn’t need anybody. £15M a year for a guy who has come here to train for Real next season (where Modric and Kroos are not getting younger) and Spain for the next Euro. Muchas gracias, signor. In no way better than an Özil but the club PR is doing a great job to make us forget the one who made us tickle.

By “another loanee” do you mean 2?

Give the guy a chance. He’s looked handy up to now, if ozil wants to win his place back good for him. How can you possibly think this guy is a bad signing though??

Win his place back? FFS. Emery don’t want to play him. Ozil played under 200 minutes and in every minute he played for us, he was our best creative player.

Crash, you don’t have to dispute it. It’s a nonsense figure. Anyone who keeps repeating the 15m is lying. It’s that simple.

Are you Alex in disguise?

Why are you hanging £15m as the cost of Ceballos? The figure was floated in one publication that is far from reliable and it differs very significantly from other reports.

I like him, he’s young, hungry and always looks to play on the front foot, he’s struggled with the intensity and rhythm at times, but that’s nothing we’ve not seen before.

Hopefully we can strike a deal for next summer, before his form picks up, and his value sky rockets.

He’s a Spanish international with his best days ahead of him, I wouldn’t pay more than £30-£40mill

I think he is a great addition not sure how long we can hold onto him though.

Too soon to say if he was worth it. Would like ESR in that midfield once fit to see how he does

Would be great if we can make this permanent. I still think we need a no. 10 as Dani natural game seems more suited at the 8. You don’t really see him floating in the space between opposition defenders and mf, rather he wants to come collect, turn a defender and drive forward. So while I want to keep Dani, I would still love to pick up a 10 or use Dani in a mf 3, torreira, Dani, guen/Willock as time goes on. Either way let’s get this guy on permanent basis, for the right price!

He is doing ok if a bit disappointing. Other than the Burnley game he didn’t have a great game. He is no Ozil replacement he can’t connect the midfield to forward.

The problem is Guendouzi, Xhaka and Caballos all fit into only one position in the team and Guendouzi is best fit for it in my mind. The best midfield trio would be Willock, Douzi and Torreira.

When was the last time Ozil played well?

That is a year ago

How many times does Mesut play? This coach doesn’t play him even in games when we are crying out for some creativity, and to say he doesn’t defend is missing the point, there are others whose job is to defend and aren’t very good at it. When he does play he’s rusty because he has no game time, but very few people take that into consideration and just call him rubbish, and if he does start to make a positive impact , or even look like making one, then the coach hauls him off. Unai Emery is being really nasty… Read more »

Emery is always going to play Xhaka (unless suspended) and Guendouzi. That leaves only 1 midfield place for Ceballos, Willock, Torreira and Ozil. Added to that, Chambers is a serious contender for the defensive midfielder role after excelling there at Fulham. Even then Ceballos is getting more time on the pitch than at Real Madrid. It’s not surprising he thinks he’s made the right choice. Especially when you consider that Tottenham were after him – he dodged a bullet there…

For me he always looks better when dropping into the midfield and not as an out and out number 10.

Been reading about Bale today, he clearly is gonna be off in January somewhere. Not a happy chappy.

This worries me regarding Ceballos.

I do wonder whether we can help ourselves here and so a deal with Ozil to replace Bale?

Effectively swapping Ceballos for Ozil with us agreeing to cover a chunk of Ozil’s wages. It is probably the best we are going to get.

Wasn’t too keen on him. imo he was unproven and did well only in a JUNIOR tournament for people to start raving about him. However I must admit I like the look of him so far. His greety attitude, his ball retention, his ability to pass players and shoot. He seem to have a good vision too. He can clearly improve but he his definitely in my favoured starting XI. COYG . Missing football already those interdull are unbearable.

Carzola, how we just got a perfect replacement. He will definitely stay, he wants to play for Spain, which he is enjoying coz he is at arsenal. I like the way he hates losing, you see him urge other players on even urge the fans on!