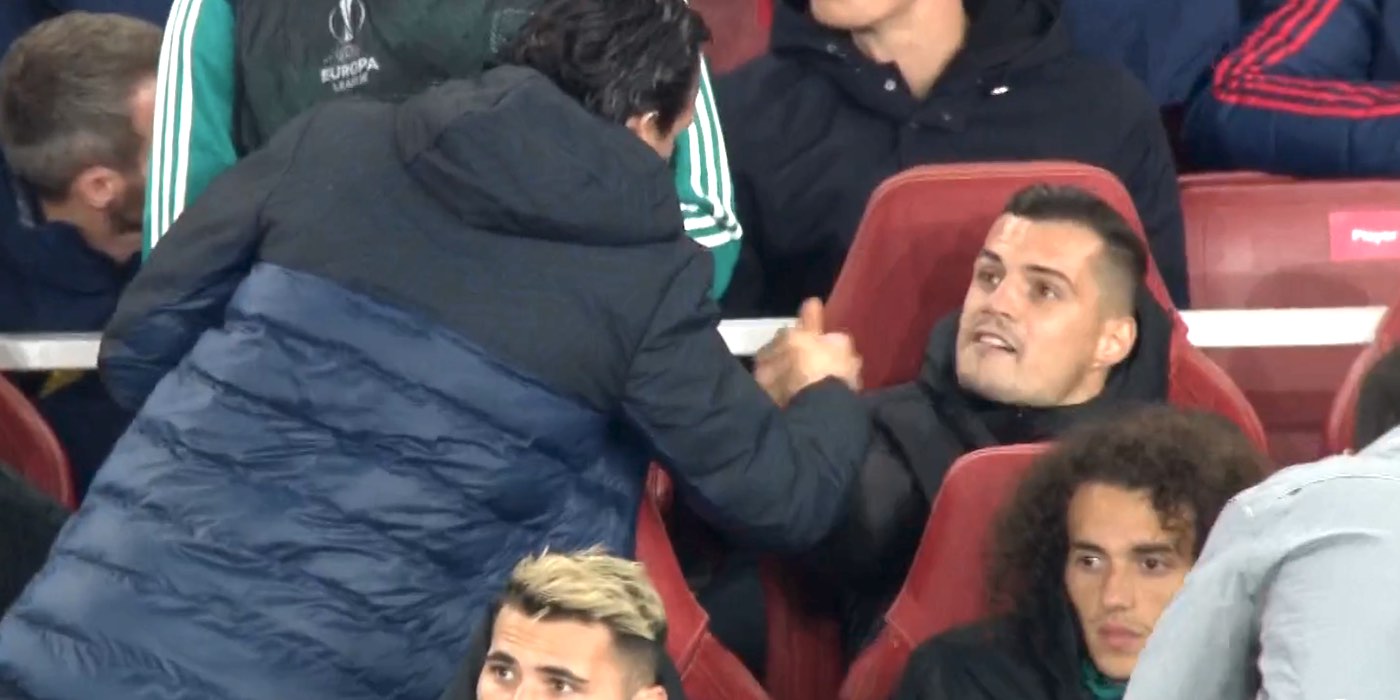 Unai Emery has reacted to questions about criticism of his appointment of Granit Xhaka as club captain by saying he trusts the midfielder, and all the players in the squad.

The manager also says that the players vote for the Swiss international backed up his own opinion of the 27 year old, as well as praising the spirit within the squad itself.

Xhaka was not a universally popular choice for captain, and he has been at the receiving end of criticism from fans after an indifferent start to the season on top of making a big error in the North London derby which gave Sp*rs a goal.

Speaking ahead of today’s clash with Bournemouth at the Emirates, the Spaniard said of his appointment, “I spoke about that. The vote gives me this information and the teammates decided that vote gives him confidence.

“Now the big thing is that we are going to work individually and collectively to be strong, and to show our supporters our way and how we can be strong with every player and our captains.

“I have big confidence and trust in every player, the captain and not the captain, because I think now in the dressing room we have a very big spirit.”

Emery was also asked about the state of the squad, now that we’re into his second season and after a summer in which he was given serious backing by the club in the transfer market.

“We’re this year also changing some or more players than the last years made here,” he said.

“But really, I am happy above all in the last matches, with those news players and with the ideas and the style we can take and we can get to be stronger in our matches.

“That is our work and every day for me is one challenge to analyse our team after each match, look at how we can improve for every game, for Sunday against Bournemouth with that difficulty and really, to be consistent and progressively getting better for each match.”

These days a hybrid version of Boumsong, Squillaci, Sylvestre, Palmer combined into one freak accident is called Xhaka. This bloke albeit a good one never fills anyone with confidence when he is on the team sheet. But then if he has lot of respect in the dressing room it makes me scratch my head….

Ya gooner
Reply to  Takeshita-san

There’s always that one person at work who’s really shit at their job, but because they’re such a sound fella or lady they get a free pass. Maybe that’s xhaka

Greg in Seattle
Reply to  Ya gooner

But he’s not really shit at his job. He’s fine but all of the sudden it appears we have a variety of better options. He’s a bit of a victim of circumstance.

If this experiment fails, you two WALK.

As a scientist I’m starting to scratch my head and question how much more data we need to prove the Xhaka-experiments don’t work in this league….lots of data to show function without him and lots of data that shows disfuntion with him. I look at that team again today and the warning bells are ringing loudly surrounding that midfield. It might actually work more today because Bournemouth like to play possession football and not so much on the break and that slower pace suits Xhaka more, so today we might be ok. But going forward playing Xhaka against fast counter… Read more »

Walk into the sea!

Must be absolutely pulling up trees in training. I don’t think he’s as awful as a lot of people seem to think he is, but we’re so obviously stronger with a more mobile midfield, and one with more clearly defined roles. Because of his strange skill set and obvious flaws, it’s so hard to have a balanced midfield with Xhaka in it. It’s starting to look like an issue that could dominate the season for Emery, especially if we start to struggle with results.

Greg in Seattle
Reply to  Jacob

IMO, if you are going to go with a devisive midfielder, it should be Ozil. We have better options for the deeper spots; we haven’t shown we have a reasonable creative replacement for Ozil.

Is it just his spirit that defends?

I used to find his of the English language quite charming , now it grates. Especially when talking about our utter garbage excuse of a captain.

Sorry Emery, you’re boy Xhaka is shit.
Time is already running out for both of you’s at this club.

This photo is from the moment after the opening goal against Liege. Emery doesn’t go to his assistants, goes past the front row of players and reaches over to Xhaka…and those eyes say nothing but mutual love and devotion. Xhaka could truly be the thing that breaks Emery as a manager. I don’t think Emery is a bad manager by any stretch and he has done and continues to do some very good things…but so much of that falls down with this utter fanaticism of Granny Xhaka who is a poor choice and force the rest of the team to… Read more »

1 out of 60k people in the stadium trusts xhaka in each home game.
Why the hell do we need to vote for a captain? Should they vote for line up and formations too?

Emery is a coward who used a secret team vote to justify his choice of captain. After making Xhaka captain for all the games prior how else were the players gonna vote. To do otherwise would have shown open rebellion against the coach. Listen to the Q&A session between Tierney and Bellerin to hear how they answer a planted question about Xhaka as captain. In my opinion it is totally staged. Once you have to resort to staged sessions to convince fans of your choice of captain you know Emery is getting desperate

Emery.s English is like 1 of those seeing eye pictures, u either get it or u don.t. I basically end up guessing what the meaning is most the time. Oh well, he.s ours and I continue to support him. I love his little terrier act, I want to see him succeed

To be fair, we seem to be progressively getting better for each match (league) at being consistently hard to watch. I get we’re third and I don’t want us to fail, but our play is hard to get enthusiastic about

I get it now, this secret player vote was just to give Emery something he could hide behind.

Seriously, though, I asked it the ratings thread: what does Xhaka bring to the team that can be considered a big plus? What? Anyone?

I think if there is human clone, he would have clone 11 Xkaha and play them in the first team.