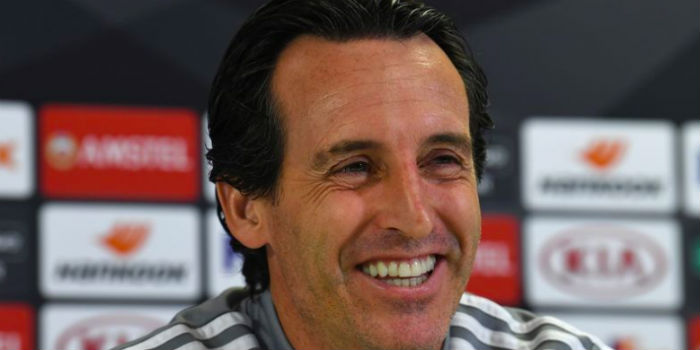 Unai Emery has confirmed that Kieran Tierney and Hector Bellerin are ready to play against Standard Liege tomorrow night and allayed fears that the Scot had suffered an injury setback.

The former Celtic man had been expected to make the trip to Manchester on Monday but stayed in London on the advice of the Gunners’ medical staff.

When the 22-year-old also pulled out of Steve Clarke’s Scotland squad for their upcoming games with Russia and San Marino, it raised further questions about his fitness. Luckily, it’s nothing to worry about.

“Tomorrow is a good opportunity, he is ready to play,” he added, “he will take minutes and confidence. He will be able with us to show his progress.”

Emery went on to admit that he’d played a part in getting his £25 million signing to pull out of international duty.

He said: “I asked Kieran yesterday because we were waiting first for him to be with us consistently. Each step is important to be consistent.

“He didn’t play in Manchester because he had a small problem, not important, but the doctor told us it was important for him to be here working alone, preparing for tomorrow.

“If we are taking precautions with him it’s important with the national team. We’re thinking it’s not the moment to work with them. For the next matches I think he’ll be ready to play with us and them. Now he will play tomorrow and hopefully he can be good completely physically, technically, with the performance we need.

“He can play but being and taking precaution for not playing a lot of matches in a few days.”

Emery also admitted that he’s been pleased with Hector Bellerin’s reintegration into the first team squad after his compatriot played 15 minutes against Nottingham Forest in the Carabao Cup and then featured against Liverpool for the under-23s on Saturday.

“Hector Bellerin is the same but with a small difference,” said the boss.

“His injury was more time, after a long time, nine months, we need first to play the 15 minutes he played last week. Perfect, the first minutes. He played in the U23s to take confidence, to do actions on the pitch to feel good, to repeat them at a higher level.

Almost every one available, Emery has quite an easy run untill mid December, time to prove the last 8 games of last season were a one off.. or fans will help you pack..

Leicester away November 9th. Big one.

Sounds like we may he pinning our improvement hopes on a new LB and a still-adjusting RW. Always hopeful but I think you’re right and we have to look at end of last season as part of the CV. All signs point to a dogfight for the last CL spot and hope we don’t regret not making hay while our rivals are struggling. They’ll improve to the mean as will Aubas scoring rate. Yikes.

Can’t even say ‘what could’ve been’ because we had him. Pulis ruined him for us. Loan system is not as straight forward, there is a reason why our young players prefer to go abroad instead of championship or any of the hoofball clubs. Most of our unsuccessful academy players cited the same reason – from playing on the ground at Arsenal to going route one is a big adjustment. Style matters, culture of the club matters. Emery may not be an Elite manager in terms of results or in dealings with elite players but he has done well with our youngsters.. credit where it’s due..

I know you can never be sure, but it was pretty clear that Gnabry had something extra. Much stronger and more developed than his peers, he was skinning full backs for fun at 17. Remember his first goal against Swansea was a thing of beauty.

https://www.youtube.com/watch?v=KanCr58cqKs
Wengerball <3
Wow it's hard not to compare it to that dross served up last Monday.

Glorious. Man I miss that. Even if we weren’t anywhere close to winning the league, we always knew we had moments of glory in us.

I agree. I think there’s much to be said for entertaining, fluid, beautiful football. Is winning at all costs really the best? Or shouldn’t we constantly strive to win with beautiful and entertaining football? During our low points with Wenger I questioned the beautiful way, but now I long for it.

emeryball at one point was good.. hmm remember ramsey goal? auba goal vs lei? maybe it was the odd ones out

We failed him but didn’t really give up on him, Bayern’s pull was too strong and they played quite dirty to get him. For us, I think it finally came down to either him or Ox and we did a very Arsenal thing, we lost both loll

Pulis may have ruined him for us, but you gotta ask yourself “why the FUCK did we send him to Tony Pulis?!”. No wonder he wanted to go back to Germany…

I’d argue that Emery is an elite manager.

Got Lorca promoted in his first season to the second division for the first time in their history, then finished 5 points off back to back promotions.

Got Almeria promoted in his first season to Spain’s top flight for the first time in their history, and then finished 8th.

Finished 6th in his first season with Valencia, then 3x 3rd Place finishes, in spite of crippling debts, having his squad decimated every summer, he also developed youth, and the club nose dived after he left.

He won 3x Europa leagues in 3 seasons with Sevilla

He won 7 trophies in 2yrs in Paris.

And he took us to a European final last season, and narrowed the gap to 4th from 13 points to 2 points from the previous season.

He’s in the process of building a new team, but he inherited a mess, and other than our strikers, a very weak set of deeply flawed players.

He’s blooding through youngsters, something he has form for, but neither Mourinho or Allegri have any type of form for.

And at the same time brining through players still settling into their environment, the team doesn’t have any structure, because there is no structure, and Emery is being tasked with building one from scratch, and it’s going to take time+patience, if Emery gets 3rd or 4th? Then that’s progress, particularly as he took over a team in 6th, who was going into their second season outside the CL, and we’re 13 points off 4th, and 37 points off top.

This was always going to be a 2-4Yr project, a lot of Arsenal fans have very unrealistic ideas about where we currently are as a squad, outside our strikers+ goalkeeper, there’s really not a very deep pool of talent to work with, and that certainly isn’t Emery’s fault, and a new coach will face exactly the same problems, and need the same amount of time to build, possibly more, as he’ll be starting from scratch.

maybe he is an elite manager in spain?
psg trophies do not really count..

he aint elite if he is picking xhaka week in week out. ‘nuf said

Credit to Per Mertesacker, he runs the academy and Freddie Ljunberg for his role in developing those youngsters in Emery’s team now. Emery is not a manager, his role is with the first team squad. Under Per, we now have a loan manager in Ben Knapper. It has nothing to do with Emery.

Imagine ….Szczesny bowls the ball out to the OX, who bombs down the wing, crosses to Gnabry who dribbles past 3 defenders – Goal! The Gunnners move back to the top of the prem!

Both should be starting and playing significant minutes of fully fit. Hoping to see Holding/Chambers but likely it’ll be Holding/Mustafi which is fine. I’m not so convinced though even with these guys coming back the brand of football were playing is going to change.. if we were trying to play a certain way but the players weren’t good enough, I could see how plugging in better players would breed better performances. However, our structure/style of play gives no evidence that anyone coming into the team will magically make that better. That’s my biggest worry for this team and I don’t see any signs of improvement there. But need something to rejoice about so our shiny “new” full backs coming back and CB are fantastic news and can’t wait to see a full strength squad on the pitch. COYG

I actually think Holding Mustafi is a decent partnership. Completely fine with that tomorrow night.

I agree. They complement each other well. Mustafi can be aggressive as Holding covers well and is the cool head. Just was saying wouldn’t mind seeing how Holding/Chambers would look as Chambers has really impressed as of recent imo. We’ll get there but glad Mustafi has been playing well with no pressure on him for his own sake. Can’t wait to see the young ones as always!

…even for the EPL if Bellerin and Tierney complete the back four and Xhaka is not the one saddled with the DM role.

yeah, having these two -and Holding- will be great, but it’s not going to fix the midfield problem.

It’s always something, isn’t it?

Ah yes always something. However, while I don’t think we have a complete solution, Emery certainly has options to work with but he doesn’t seem to want to try anything. Personally I’d love to see torreira guendouzi Willock/ceballos combination. Also think Ozil still has plenty to offer this team but it’s obvious he’s going to only be used in cup competitions which is disappointing to me. Is what it is though, Thursday we go again.

90%?! A few were woried, but you might want to go check the comments section again of that piece and maybe take a tip from yourself…stop losing your mind, overreacting and over exaggerating.

I’d like to see both of them starting against Bournemouth so maybe only use them as subs against Liege. Unless neither of them are going on int’l duty then maybe the can both play in both matches.

Tierney backed out of the Scotland squad for this break, and Bellerin rarely gets called up for the Spain Sr. squad so far. No way he would this soon after injury without proven form.

Emery, I don’t hate him, but I’m convinced he’s not the one to lead us fwd, again nothing personal towards him but maybe with a team with quality all across the board he’ll be a better coach but with a team that we have at the moment, where it’s all about balance, and playing the right players and the right formation depending on the opposition, he’s clueless! We probably wont but Arsenal should start looking for a new head coach now, or in January for next season because giving Emery another season would be a waste of time.

I imagine Pochettino and Solskjaer are sooner to the chopping block.

Winning 6-5 is better than losing 1-0 trying to defend well.

Winning ugly maybe ugly, but it’s still winning, and that covers many sins.