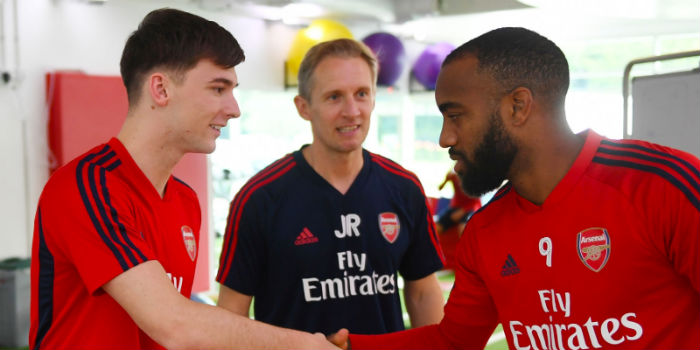 Unai Emery says Kieran Tierney is ready to play against Sheffield United on Monday in what would be the Scotland international’s Premier League debut.

The 22-year-old left-back has looked impressive in his first two outings, in the League Cup and Europa League respectively, and will now challenge Sead Kolasinac for a regular starting berth.

Tierney missed the opening six weeks of the season while he recovered from a double hernia operation and sat out the recent Interlull on the advice of the Arsenal medical team. Sead Kolasinac meanwhile played two games for Bosnia and Herzegovina.

“He’s ready to play,” said Emery when asked about his £27 million summer signing.

He added: “Now we have two options in that left-back role with Sead Kolasinac and him.

“We’re going to play a lot of matches after Monday. We will need every player. It depends how he comes into the first training with us, Sead, after his international matches.

“We now have two players in that position and we can use one on Monday, it depends how they are, one or the other.”

The boss also gave an updated on Alex Lacazette who has missed a month of action with a niggly ankle problem that was first picked up in pre-season against his former club Lyon.

Monday evening’s trip to Bramall Lane could come too soon, although the boss says he’ll monitor the Frenchman, voted the club’s player of the season last year, over the coming days.

“Today is his first training back with us,” confirmed the Spaniard. “He finished it well and he’s feeling well with his injuries. Tomorrow we will be training again and he will be with us. We will decide.

“The most important thing is that first he is training, then secondly it’s whether he can be with us and it depends how he can feel in the next days training with us, whether his ankle is not giving him any more problems.

“It’s positive for us that he’s started training and that he’s a possibility for Monday. I don’t know whether he’s ready for 90 minutes or on the bench. We’ll decide that over the next days, but it’s very important for him to come back to training with us.”

“We now have two players in that position and we can use one on Monday, it depends how they are, one or the other.”

It’s true. Likewise, I have two sandwiches in my bag. One was made today. The other I forgot there a few weeks back and is by some way no longer edible. I can eat one of them today, it depends how they are, one or the other.

Its commendable of Emery to have been speaking in English from the 1st interview. However, it’s one of those areas where we have been truly spoiled by his predecessor.

I know Emery is a native speaker but I’m tired of hearing (reading*) “The most important thing is that first he is training…” in Ozil, Lacazette and Tierney articles.

*Anyone else while reading quotes, reads it the person’s voice being quoted?

A Gorilla
Reply to  SB Still

Every manager repeats themselves with their own little phrases, it’s impossible not to with the amount of media we demand from them.

ArsenesLongSufferingZipper
Reply to  A Gorilla

“Tierny had a little bit the double hernia problem….six to eight weeks. He’s back with great mental strength, and he’s ready to play”
There…fixed it for Emery.

Sead is an Arsenal player, and one who’s not done anything to warrant being compared to a mouldy sandwich. He’s better in a back 5 but he’s hardly done a Mustafi. Get behind him, we’re still likely to see a lot of him in cup games.

I agree. Best left full back in the Bundesliga when he joined us. What did we do to him?

I think he has been quite decent recently with important defensive contributions. I cringe a little when blogs lays into him with regularity, but everyone has their favorites.

And to be honest….Mustafi has looked more solid in the few minutes he’s had. He’s still a Gunner, and perhaps one should lay off him as well.

w00ts, this kid is awesome, gonna take our game to another level….

Have we came up with chant yet for him?

Whatever it is, the chant should incorporate the “Thierry” pronunciation similarity

Kieran Tierney, ya!
He’s back from his hernia

(Find some traditional Scottish waltz theme with bagpipes for it)

Emery keeps reminding us how many games we have coming up all bunched together due to meaningless internationals. However, he has to make a choice on the back in the premiership games on the back four. He can’t keep rotating they need to get to know each other and find consistency if we are to finish 4th or above. Don’t even get me started on the midfield. My fear is we are in mid October and he doesn’t know he’s best eleven.

don’t worry. it can go til December

Considering that our best defenders have been missing and Lacazette has been out too it hasn’t been easy.

Reading lots of positives today for the mighty gunners

Start Tierney Monday!!!!! Lacazette is my favorite but doesn’t seem like he is match fit yet so let’s not risk him just yet

Does the return of Tierney threaten our PAL offensive?
I suspect Auba is tailormade to put those delicious crosses away; that means he is most suited to play through the middle.
If the rumour that Lacazette was up for sale in the summer has any truth in it, I think we might gradually see Martinelli or Saka on the left, Pepe on the right, and Auba and Laca alternating in the middle.

Are you the type that likes making rumours from nothing? I think it was Aubamayang the media was talking about. So, this our potent strike force you don’t like it?

Excellent news. Are Bellerin and Ozil ready as well?

That team is a shoe in for top 4 with some matches to spare.

Think it’s safe to assume Tierney will start on Monday, and will be given a steady run in the league, from the two games I’ve seen, our strikers should be excited about playing with Tierney.

Saka has done well, but Martinelli has to be pushing for a start, he was a handful when he came on against Bournemouth, he really puts himself about.

Controversial opinion….. but all we have to do at Bramall Lane is win, keep chalking points, make ourselves hard to beat, and build from there.

Tired of seeing Kolasinac get into a great position only to hit the first man from a cross. Although I have seen improvement in his defending I really want to see Tierney’s delivery coupled with Aubas movement in the box.

sAMa
Reply to  The Arsenal

You are not alone on this one bro. Tierney needs to start playing regularly, he will contribute more from left wing.

This something that is going to boost the team ability to control games, also regardless that Shaka is the captain is stats is not favorable for him to start go with Tierny and best central midfielder from Uruguay and Arsenal would be force to recogn with.

I think we will see him start on Monday. International break was convenient enough gap to ready him for the main competition. Plus Kolasinac will have to come back from Internationals. …that said, as I mentioned elsewhere, we will NEED all assets ad it is not an automatic given that Tierney is necessarily first choice. Kolasinac has much improved this season. Tierney I feel will be good for us and the return of Bellerin will also help our cause. that said, Chambers has also impressed recently given opportunity to perform in his natural position before Wenger got distracted and tried… Read more »

The fullback options now with Tierney, Kolasinac one side, Bellerin and Chambers other flank (plus AMN) will hopefully give us a boost. BUT still many issues to work on with team effort through the 90 minutes. Part of our issue with gaps between midfield and defense is the lack of concerted pressing. Even without Ozil or otherwise, we have tendency to get disassociated and drop our efforts off the ball. It is common for us to have gaps to defend at the back. Particularly, we play often on the front foot high up against opponents who prefer to cede territory… Read more »