Maybe because Manchester United are worse than they typically are. Maybe it was the injury ravaged team they fielded. Maybe it was the compounding of the last few results not living up to what was expected from Arsenal. Regardless the Gunners got a point but the result didn’t do much to change the feeling that things are still not going in quite the right direction at the moment.

Manchester United 1-1 Arsenal: By the graphs 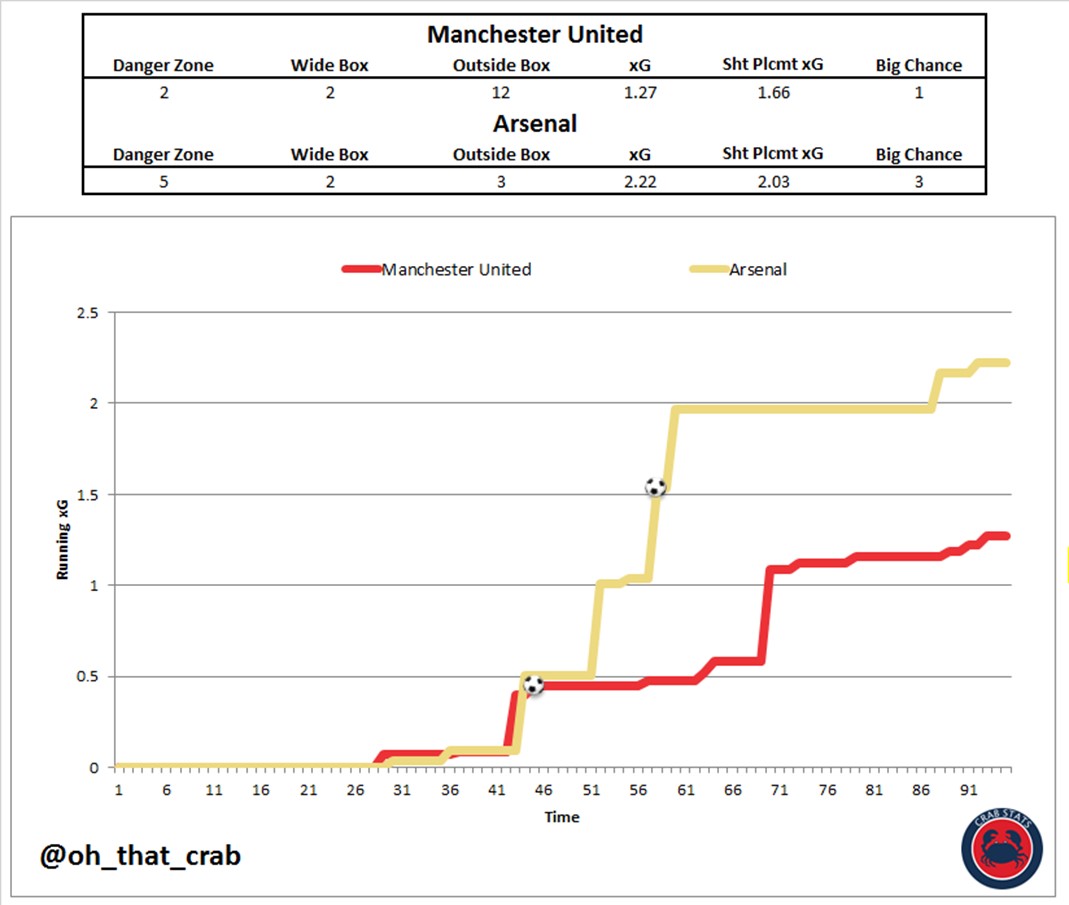 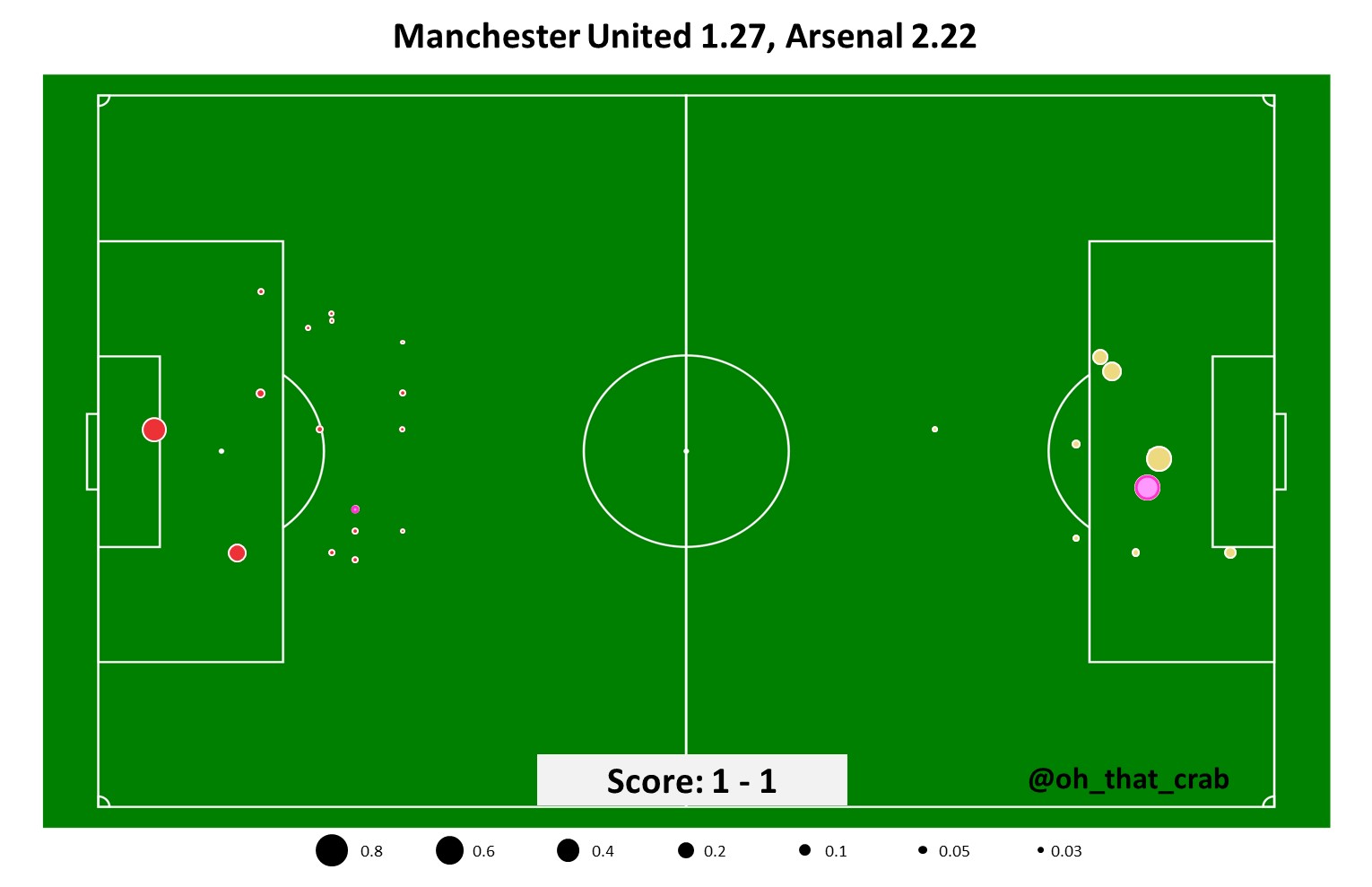 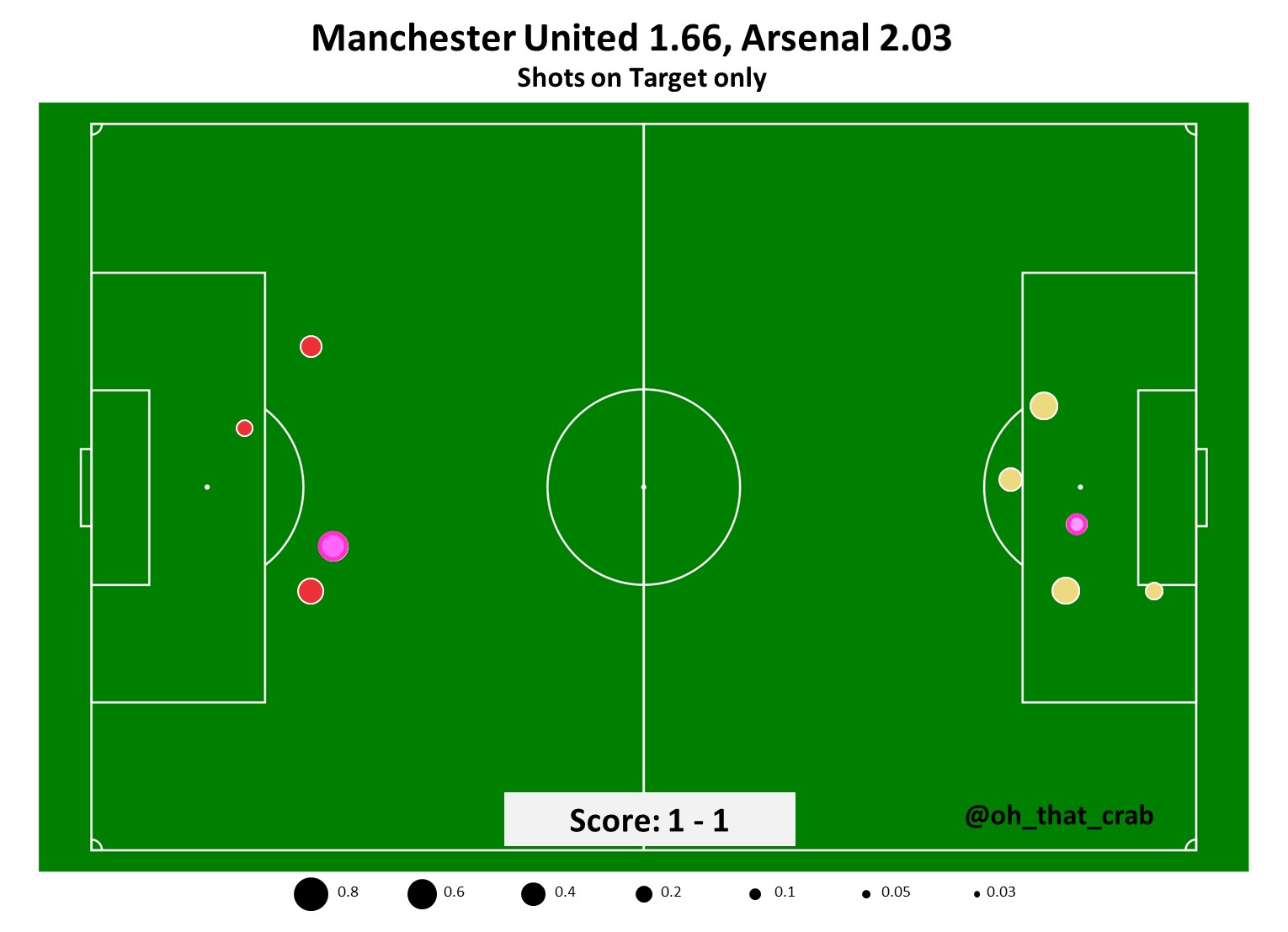 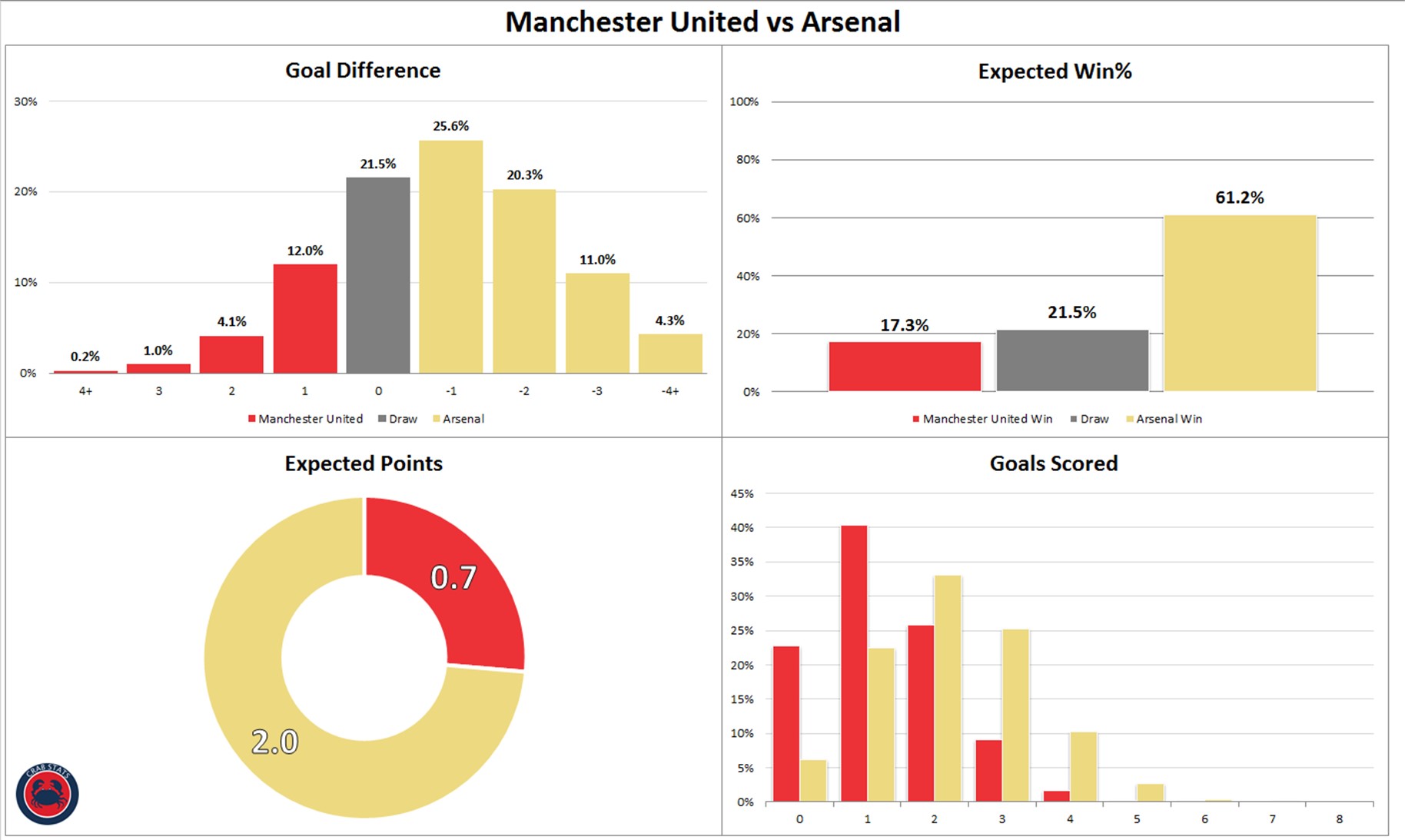 Manchester United 1-1 Arsenal: By the numbers

2 – Shots by Nicolas Pepe and Bukayo Saka against Manchester United, the leaders for Arsenal.

2 – Chances created by a lot of players, more specifically Peirre-Emerick Aubameyang, Bukayo Saka and Joe Willock to tie for the lead among all players.

3 – Interceptions by Sead Kolasinac, tied for the lead among all players

Overall this was not a very impressive match for any of the players on the pitch. It has been a major narrative how far this rivalry match has fallen and the stats back up that this wasn’t exactly a masterclass of teams going at each other. I think it pretty well backed up what we all watched with two teams that were playing in less than ideal (but not out of the ordinary for England) weather and the talent level didn’t quite match up to what you would expect from the badges and colors on the kits.

For Arsenal the most impressive player really seems to be Matteo Guendouzi who did another stint of trying to be the everything midfielder that Arsenal need. 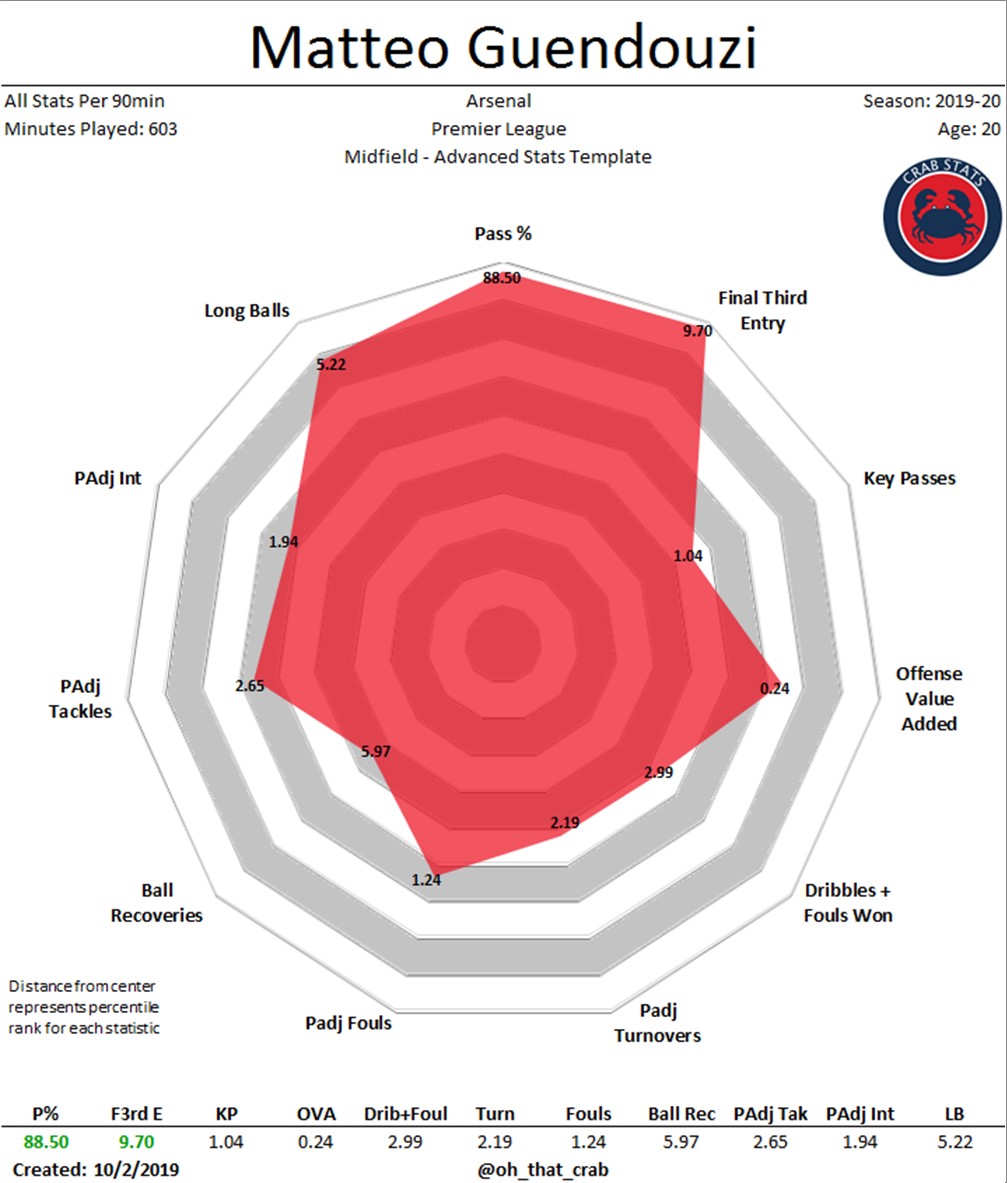 Guendouzi is steadily moving from a player that is good for his age, to simply a player that is just very good. It is interesting how long until he is given even more free reign to be the main player in Arsenal’s midfield. In this match, especially in the first half he was given the task of being the extra cover to protect Sead Kolasinac on the left wing, with Lucas Torreira given a similar job on the right (with the added bonus of marking Paul Pogba). 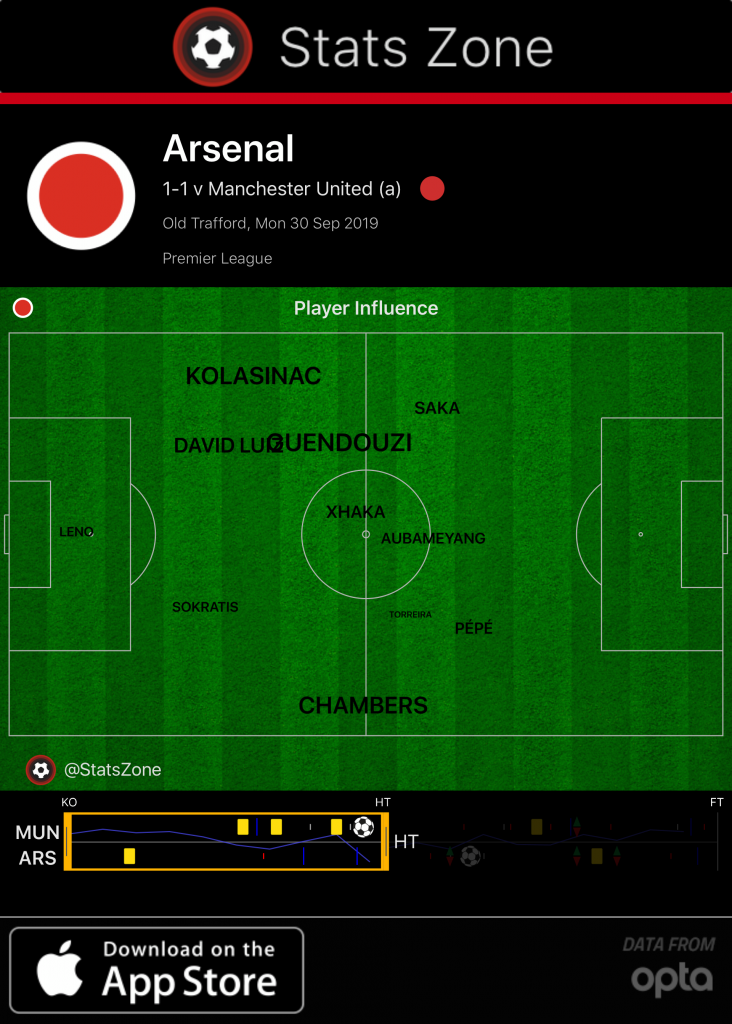 He did this while also having the energy to always seeming like he was available for a pass as the deepest midfielder more often than not.

16 – Shots allowed by Arsenal, the 4th time this season Arsenal have allowed at least 15 shots.

1.3 – xG allowed against Manchester United by Arsenal, the second lowest expected goals total that Arsenal have allowed this season.

0.099 – xG per shot allowed this season by Arsenal, 7th best in the Premier League.

0.079 – xG per shot allowed against Manchester United by Arsenal.

9.7 – The average distance in meters from goal the opponents have taken shots against Arsenal, the furthest average in the Premier League.

9.4 – The average distance in meters from goal by Manchester United for the shots taken shots against Arsenal.

Arsenal have allowed a lot of shots. If they want to be a good defensive team they should probably allow less.

That being said, Arsenal are actually doing a good job of keeping teams from taking shots from distance compared to close to their goal. They certainly aren’t a good defensive team right now but as much as taking a bad looking statistic to beat Unai Emery up with is fun, he does at least have the team forcing shots from distance over them working for shots in even closer.

As bad as seems things have seemed at times (and how bad the felt during this match) Arsenal are hopefully not that far away from looking like a competent team. With the competition this season, that might be enough to achieve a top four finish.

Ceballos, 11 passes in the final third and led all players for Arsenal….he was on for 35 minutes. Can we just ensure this lad plays please even if it means Xhaka or Torreria drop out.

Judging a player with one given statistic is simplistic at best. We were wide open once he was on field. I’d say the game plan demanded that we take more risk in the second half, so the forward passes into final 3rd were not in isolation. ___ Also xG used to be a beating stick for the coach earlier before. But now no mention of it’s significance, and the fact that we were achieved the highest xGA that man utd faced in all their games. Include facing the “attacking” coach Lamps. But it does not serve the agenda here. Shots… Read more »

*shots taken. not just on Target
_

If we can achieve a combination of lowering the shots faced, and restricting the opp to low quality chances, then that would be great.

That’s why it should be Xhaka making way and Torreira actually playing deepest rather than furthest.

The parallel universe where Torreira has replaced Xhaka and Guendouzi and Willock play ahead of him must be a really fun place. I think Arsenal are probably sitting 2nd there right around City’s total. Anyone got a hook up with Rick Sanchez?

Not going to happen as long as Emery wants the deepest midfielder to drop between the centerbacks to defend crosses when the attacking team spreads the ball wide. It’s a key piece of Emery’s defensive tactics. If we don’t have the fullbacks and wide midfielders who can stop the opposition getting in crosses, or if we are going to tactically chose not to cut them out, then we have to defend them when they come in. Xhaka makes a fair amount of clearing headers while Torriera isn’t the player for that job.

We were wide open because he replaced Torreira.

yup…and ganduzi did the same in 90 minutes…despite having torreira and xhaka covering for him ..allowing him to gambol all over the place.

Good analysis Scott. I’m often culpable for searching for sticks to beat Emery with but your stats on shot distance from goal are interesting. At least one aspect of our defending is promising.

Opposition teams are taking long shots against us because we are defending so deep. This is also partly why we’ve looked so disjointed in midfield and attack.

I can be guilty of it too. The volume of shots isn’t good. I don’t love how deep Arsenal drop back to defend because it feels like their transition to attack is harder but it isn’t a really bad strategy tactically. It’s the opposite of the current Manchester City Numbers, few shots but some very big chances.

Great info. just confirms the dross we all saw. Hopefully we can kick on with the injured players close to returning. A better balanced defence will definitely improve us and maybe allow our midfield to stop chasing shadows and start controlling games which will also help the youngsters. Will be interesting to see how Emery manages this moment as surly he won’t continue with his current drossball style that’s so hard to watch.

emery is a cowardly bum

What does the “Player Influence” screenshot measure?

And don’t say “player influence”, either.

It’s sort of like average position, but basically which areas of the pitch they’ve been most influential in (in possession, I think)

Note that does not factor in off the ball work, as noticed in Torriera’s tiny name. He was tasked with staying tight to Pogba when Arsenal were out of possession. As soon as Torriera was removed, Pogba started running the game. Torreira had little influence on this match? That is far from the case, I’d argue.

Meant to respond to OP.

Good info Scott. Match result was disapointing given that stats also backed up that Arsenal was expected to win.

Pre-match odds (both bookies and stars based models) had Utd as the slight favorites. On a neutral ground Arsenal would be the favorites but it wasn’t enough to give them the edge away. I think the Arsenal performance kind of showed that with some more adventure and pressure they were there for the taking. The flip side they were the most dangerous when Arsenal had players forward and could attack our bad transition defense. Maybe more sustained pressure pushes them back but ¯\_(ツ)_/¯

Interesting how the Xg really reflected the feeling following the game

About the chart on Guendouzi: how is the limit of each of these points on the chart decided?

Pass % is obviously going to be on a scale of 0 – 100 % , but how about the maximum long balls or ball recoveries for example?

Are they ranked against the best performer in the league or on the pitch; or is it more complex than this?

It is the percentile rank for that category compared to other player of the same position. My data for comparison goes back mostly to 2013. The cutoffs first max and min are the 95th and 5th percentiles.

Hmm. Quartile “rings” might help in that style of data visualization.