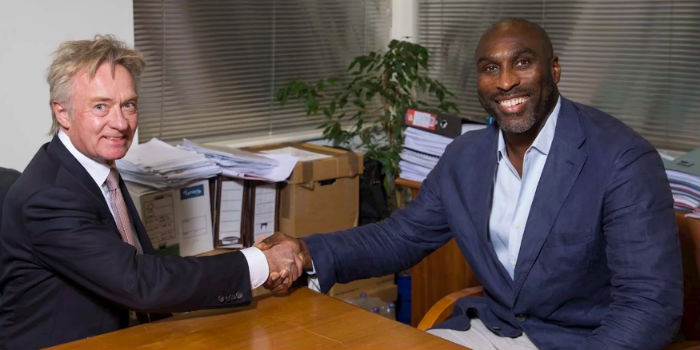 Ex-Gunner Sol Campbell has been appointed manager at League One strugglers Southend.

Southend are currently second bottom in the table on five points having mustered just one win in 14 games. Having conceded 40 goals already they are seven points adrift of Wimbledon above them.

The only reason the Shrimpers aren’t bottom is because of the points deduction incurred by Bolton Wanderers who despite racking up more points than Campbell’s new side remain 10 points adrift.

The Invincible certainly has his work cut out at Roots Hall, so it’s perhaps unsurprising that he’s leaning on those who supported him at Macclesfield, his previous club, to give him a helping hand. Former Portsmouth team-mate Hermann Hreidarsson and ex-Manchester United striker Andy (Andrew?) Cole will both form part of his coaching team.

Campbell, who has signed a deal until the end of the 2021/22 season, parted ways with Macclesfield in August by mutual consent having steered the League Two side to safety when they looked dead and buried.

In the space of six months, Macclesfield club collected 31 points from 25 League games, securing survival with a 1-1 draw at home to Cambridge United on last season’s final day.

Sanchez Watt: ‘I was on crutches, at the end of my Arsenal contract and my little one was coming along, it was a panic’

I know he was a great player and dumped spurs for us but Sol Campbell strikes me as a proper idiot.

How can you say that? He’s one of our own is Sol.

No, he joined us by selling out the club he had been with since a boy. And then sold us out by pretending to leave for a foreign club and signing for Portsmouth in order to get another signing on fee. A great player, undoubtedly, but let’s hold off the canonisation. No pun intended.

He sold out Spurs to become an invincible. it still upsets their fans to hysterical lengths. What’s not to like about the guy?!

He’s working in the lower rungs of the league, gaining experience and having just pulled off a miracle in his first managerial stint, he’s one of the more famous ex footballers actually putting in work in the sport and excelling in it. You want to see him on sky or BT instead ?

Goodness no. If he’s in the lower rungs of the league I don’t have to pay attention to him.

Giroulski is the proper idiot

Idk man. I think calling a tax on properties worth more than £2m “madness” is closer to making one a proper idiot.

He couldn’t possibly be worse than Unai Emery in the Premier League.

On a serious note it’s a good sign seeing more Arsenal invincibles taking up coaching jobs. That means Wenger’s “total football” philosophy will never die! Looking forward to having one of them in charge of the club soon.

I think we’re more likely to see Arteta. You don’t get to be Guardiola’s protoge for nothing.

Arteta should go to Everton.

Bet would do a better job than the coward on charge, currently destroying the beautiful football arsene spent years building for a load of I don’t know what

I have supported arsenal all my life and I for one never advocate for anyone to lose their job but I for one have never hated any manager or coach as much as I do this one, yes the only arsenal manager I have known is arsene but this guy is a complete and utter idiot. He has us playing boring football with no style and now he is blaming players for loses when we can all see it’s his own damn fault? That’s how u lose a dressing room Einstein no wonder the PSG players bullied his ass. Sorry… Read more »

Keeping it Monreal
Reply to  Dan

Boring. Managed to turn an article about Sol into a rant about our current manager.

Tough job, hope he does well. I’m amazed he hasn’t got a raft of clubs after him – kept a side up who were cut off at the bottom of the league, with no resources and by all accounts didn’t get paid himself. Yet certain other high profile former players walk into Championship, top tier or international jobs (Lampard, Gerrard, Woodgate, Keane, Giggs) Sol doesn’t get the plaudits he deserves for working his way up, hope he keeps Southend up and gets offered a job replacing whichever Championship side Gary Rowett/Monk/Megson happen to be leaving next.

Good for him. Nice to see a black manager given a chance. But he’s got a massive job on his hands keeping them up.

Personally delighted to see Big Sol take the reigns at my local team. Shall be getting myself down to Roots Hall a to cheer him and The Shrimpers on!