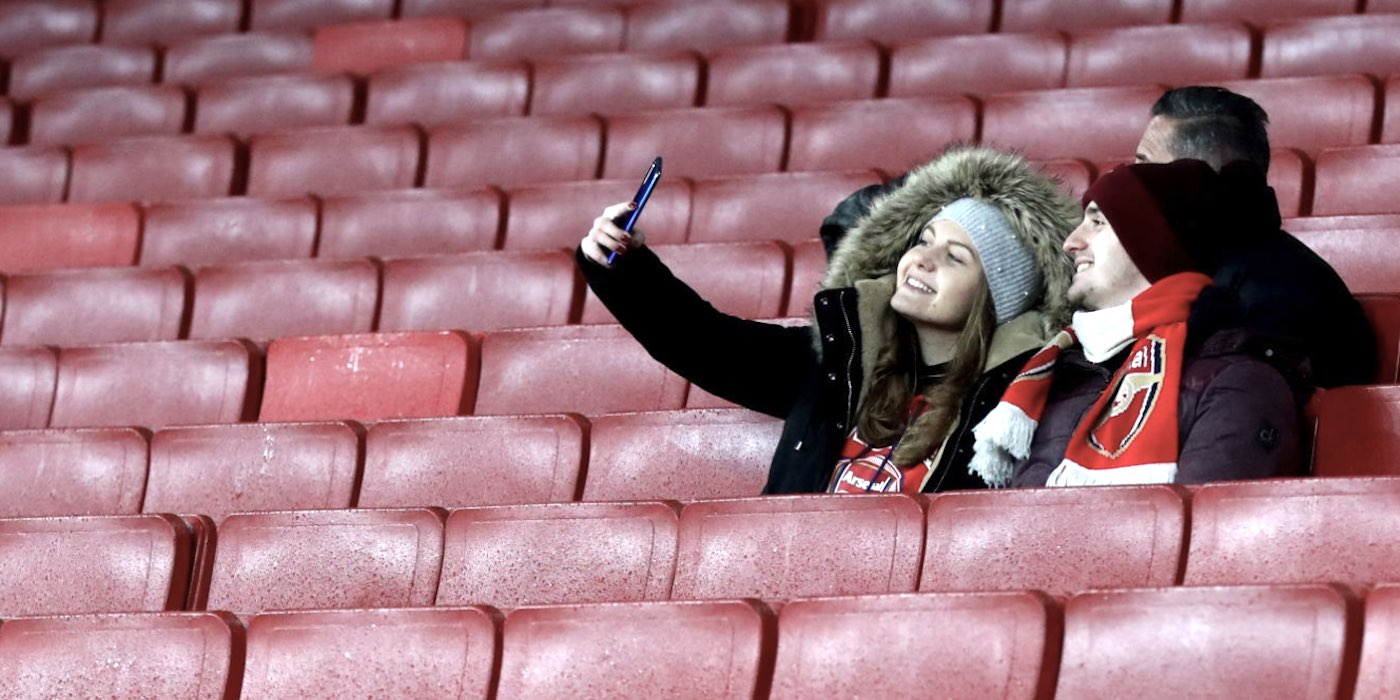 It’s now seven games without a win as once again Arsenal blew a lead to lose a game.

Pierre-Emerick Aubameyang put the Gunners ahead in first half injury time, but two second half goals from Daichi Kamada gave Eintracht Frankfurt a famous win.

It heaps more pressure on Unai Emery, but even more on the Arsenal hierarchy who are allowing this to continue. What’s up, Raul?

Read the Arsenal 1-2 Frankfurt report and see the goals here.

Here’s how the players rated this evening – I feel like they’re probably generous, but at this point, does it really matter?

The ratings are now hidden by default until you vote, but if you just want to view the ratings and the comments, flick the switch at the top above Emi Martinez.

Also, give the ratings a few seconds to load.

WHY WON’T THEY MAKE IT STOP!

Sorry to say, but I somehow felt that this was going to happen. So when it did happen, no surprise at all…

Because they’ve dug themselves up in sh!t so deep that even if they wash it off now the stink isn’t gonna go away for a while.

Has Stan sold up yet? Must be wiping millions of our price tag

Well, in glad I slept through that game

Hah me too, I’ve just found out, even though I already knew !!

So did the crowd

Crowd was too cold to sleep!

Me too. I slept when it was 1 nil to us confident that we will not win but I don’t think i imagine us loosing. S

I feel sorry for the players. Imagine turning up for training and having to listen to Emery’s tactics and line ups. Depressing.

I agree. His TV interview afterwards was indecipherable. The bits I understood were delusional.

I replayed that five times and gave up. Now I may never know his final excuse for losing. (Something about how we were good when we weren’t bad, I think).

0/10 for the 4th official for making Emery take off his lucky coat. Cost us the points I reckon and deeply unfair.

They didn’t make Adolf take his coat off. How is that even allowed?

Emery has a real excuse there and should be forgiven for this performance. Hopefully he will be able to wear the lucky coat on Sunday and we will win! COYG!!

0/10 for the Frankfurt manager’s parents in naming their child Adolf.

I know right. It says a lot to be honest.

He could never be Germany Manager surely?

“And our special guest tonight for the let’s kick racism out of football charity dinner is… Adolf, from Germany”.

From Austria no less

Oh No Nevery.
Reply to  Badaab

As a matter of fact, it was his grandmothers wish to name him Adolf, because she had just lost one of her sons named Adolf. And in her mind, there always had to be one Adolf in the family. Which says a lot, I guess.

Everybody is calling him him “Adi” in Austria and Germany.

So much for that.

When the UEFA official asked Emery to take his jacket off, I assumed it was because he ain’t fit to wear the club colours. Every Arsenal fan will be hitting ‘refresh’ tomorrow waiting for breaking news……

And there ain’t a damn thing ANYBODY can do about it. We’re stuck with them until they’ve made there ROI. So sad.

You forgot to rate the substitutes.

This should be over now. Emery has no clue. I really wanted him to succeed because he seemed like someone who wasn’t far from being a top coach – with a bit of luck. But unfortunately as time has gone by he has slowly but surely killed our attack. At least towards the end with Wenger we had excitement here and there to fall back on. We don’t have that any more and it’s criminal. The negativity of the early to mid 90’s (albeit the odd cup) was hard to stomach and many of us who were there and saw… Read more »

Xhaka smiling at end of game like we won. Ozil closing down of their second goal sums it all up. No passion no direction . Change needed from the top down.

Isn’t it obvious by now that those two players are not responsible for the malaise? There is really no pint in singling them out. We’ve been shit the whole time they’ve been out. More so than when they were regularly in the squad.

On the second Ozil was seriously closing down the space starting from 15+ yards away and was never getting there in time to block or tackle. There were three other Arsenal players far closer.

The problem is clearly that the squad on the pitch are not organized. They don’t know what they’re doing.

I am not a Xhaka fan but he was half-decent last night, apart from his one-footedness and habit of receiving with his back to the opposition goal which always costs us those precious seconds in counter-attack. But then I watched the reply of their 2nd – Sok doesn’t get there fast enough to block but Xhaka has seen the break and actually did move quickly enough to cover on Sok’s right. But as Kamada shifts the ball to shoot, Xhaka actually shies away, pulling his entire frame away in a perfect dummy to allow the shot to go through! Shades… Read more »

I’m not saying that they are responsible. What I’m saying is the attitude. If you watch the goal from behind you see Ozil slow down and avoid the player as if he was a moped rider. Xhaka the same we lose at least appeared to be bothered.

Danny DeVito is a lovely person and does not cause us all daily misery in the same way that Raul does, so the comparison is unfair.

“but we have improved, we control for 50 minutes, we make chances, we miss them. Frankfurt is good team [who haven’t won in England this century] and they cause us problems [like Soton]. We lack confidence [they cannot expect to get it from me] but we improve”

The rating for Raul is probably a bit generous. Seriously, this has gone too far now – just make it stop.

I went to my first Arsenal game this year, the win at Burnley after waiting for 15 years. Undoubtedly happiest day of my life. Couldn’t wait to go back.
Was offered tickets again last month and for this game yet chose not to go.
It’s that bad.

You can have mine whenever you want

Is that an offer? I’ve been waiting for a chance to go since I came back to London after a decade in South Africa, unable to see the team in person.

Should be easy. Hang around outside The Armoury and you’ll find lots of ST holders looking to unload. Care re stewards/cops and do not use touts.

That is a great photo.

indeed, not bad for an “entire stadium to ourselves” selfie

A bland group of players, I’m not convinced a new man is going to fare much better.

We’ve got big problems, much bigger than replacing Emery, it’s going to take a big character to motivate this lot, and even if he succeeds? He’s not got a great deal to work with.

I’m not even sure if its really worth the while rating the players. …they look limp and directionless. Completely lacking in belief and urgency. Gaffer signed his pwn P45. I”m not sure its long now before they pull the trigger on him. Completely mental not to 1) take off Granit. Decent game until he got the knock and the chap was practically limping the rest of the game. 2) put on Lacazette. This is su8ch a critical need for a win but he doesn;t put on someone who can hold the ball higher up. Auba and the younger players (Willock… Read more »

I thought every comment on players will be Why bother…
Worst thing is now Japanese guy scored, Japanese media will be all over this game till next month

what’s wrong if the Japanese media are indeed all over this game? They have every right to rejoice over the two very decent strikes by their compatriot

Cuz it will remind me of this game as its going to headline every sport news, news sites for a while

-The Bastard love child of Daniel Levy and T*ddy Sh*r*ngh*m on a mission to destroy The Arsenal?

He’s literally winning at his life, he’s going home tonight happy that – “I think today we improve”. Well good for him, I’m glad that he’s staying positive and living his best life.

Can you imagine. There is Unai with his life savings on being the next manager sacked …. and Still Nothing Happens.

If they don’t get this done and soon we could be the next Leeds Utd ..scratches head at the thoughts of it

Best part i Xhaka laughing his face off, hugging Frankfurt players after the final whistle….our ex CAPTAIN what a fucking great fella!

He did play in the Bundesliga before he came here so it’s likely some of those players are his mates. You see it all the time after matches how players from.opposing sides are warm and friendly towards each other. Nothing untoward there.

Yeah, it’s all his fault.

It’s not all his fault, but he really should make ready to leave.

On the one day I could have used a reprieve, after dry turkey, sickly sweet potato casserole, burnt green beans out boys turn out a performance the color and consistency of gravy. What is going on, top brass please shake off your tryptophan comas and do something.

And the lions lost, I’m Irish, I don’t even know why I care.

Asshole. Keep to it to one sport. Seriously, fuck you. I’m now officially done with site since I currently in the first quarter. Honestly: you are a CUNT.

Using Luiz as CDM did seems to be working OK. And Xhaka wasn’t awful. I’d have been as frustrated as him with that call that got him the yellow. The Frankfurt player dove over Xhaka’s leg. And unfortunately, Mustafi is now looking like our best center back.
Guendouzi will eventually be a good player. But he’s too young, inexperienced, and doesn’t have good enough control or passing to run the central midfield. That’s a big part of our problem.
Have we started with the same formation/players in any two consecutive matches yet this season?

Your final line sums it all up for me.
I long for the OK old days of players developing “automatisms”.

We can’t go back, but we MUST move on and go forward.

I dont know why, but I actually thought we’d win. Oh boy I was wrong!

Bogs, don’t insult Danny DeVito by comparing him to Raul. DeVito is an Arsenal fan, and I cannot say the same for “Don Raul”.

I hope the Ozil fan boys have been getting their 400K a week’s worth in the last few games. Invisible as per.