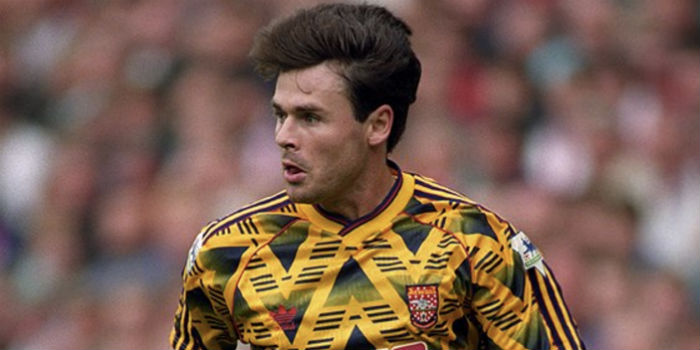 It’s the news you’ve all been waiting for…(sort of).

According to Footyheadlines.com, Adidas and Arsenal will be reissuing the original 1991-93 away kit and a range of club training gear inspired by the same era. The retro collection will be available from January 2020.

The ‘Bruised Banana’ shirt – worn by Limpar, Merson, Wright, Rocastle, the famous back five and alike – has long been a cult classic with second-hand versions retailing for nearly £450.

It looks as though a version of the club tracksuit – it’s slightly different to this one – is also available, as is a tracksuit/drill top thing. There’s also a snazzy sweatshirt. All of them feature the club crest that was in use 25 years ago.

Big positives from this season:
1) the kits.
2) errrrr…. more kits and clothing?
3) I’m basically out of positives.

Who downvoted this?! They just tore the Spuds (at the toilet bowl) and the Mugsmashers new ones!

Yeah, I know it’s hit the fan but there’s nothing I’d love more right now than to part with more of my hard earned cash.

Amidst all the doom and gloom at the club right now, some good Arsenal news! Great kit.

Unveil the banana kit with the new manager. Instant profit, popularity and positivity!

Oh no, now I have to decide between the original bruised banana and this year’s away kit.

I was originally going to wait until the end of the season and get my player of the season on the back of this year’s kit. Maybe my choice will be made easier if we continue playing the way we are now… 🙁

How so? I don’t think the club will put “Emery Out” on the back of a shirt for you.

I just mean even if there’s someone I regard as player of the season, it might not be in the glorious way I imagined at the beginning of the season.

Just put Limpar on the shirt. & remember the good times.

Season’s gone to shit?
Here, let’s put a plaster on that booboo.
There there, all better now?

Reading between the lines, the Kronkes found a warehouse full of this old kit, long since forgotten about and the dollar signs registered in their eyes.

There are some really bad fakes out there like this one. No wonder the club are going to issue official ones in January.

Love to use nostalgia to make a quick buck and distract from the real problems of our own making. -KSE, probably

I miss the old crest, can’t get used to the new one, which looks like it belongs to a pre-school football team IMO.

The Adidas logo and the old club crest are too close together in the picture. Being pedantic, to be a perfect replica they should each be centred above the outer edges of the ‘J’ and the ‘C’ respectively, as you can make out in the Limpar pic.

The whole thing looks like a bad photoshop mock-up and not a real shirt.

Maybe it’s just to differ the og and the remake? I’ve no clue why they would screw that up lol.

Dad, if you’re reading this….
This is what I would like for my birthday
Thanks
With love

Great kit shame about everything

Footyheadlines are sometimes way off the mark….. We’ll see.

Badge, logo and sponsor all look waaay too close together/small. Just compare it to the pic above!!!

Not identical. The Adidas logo and Arsenal badge are so close together my eyes have crossed!