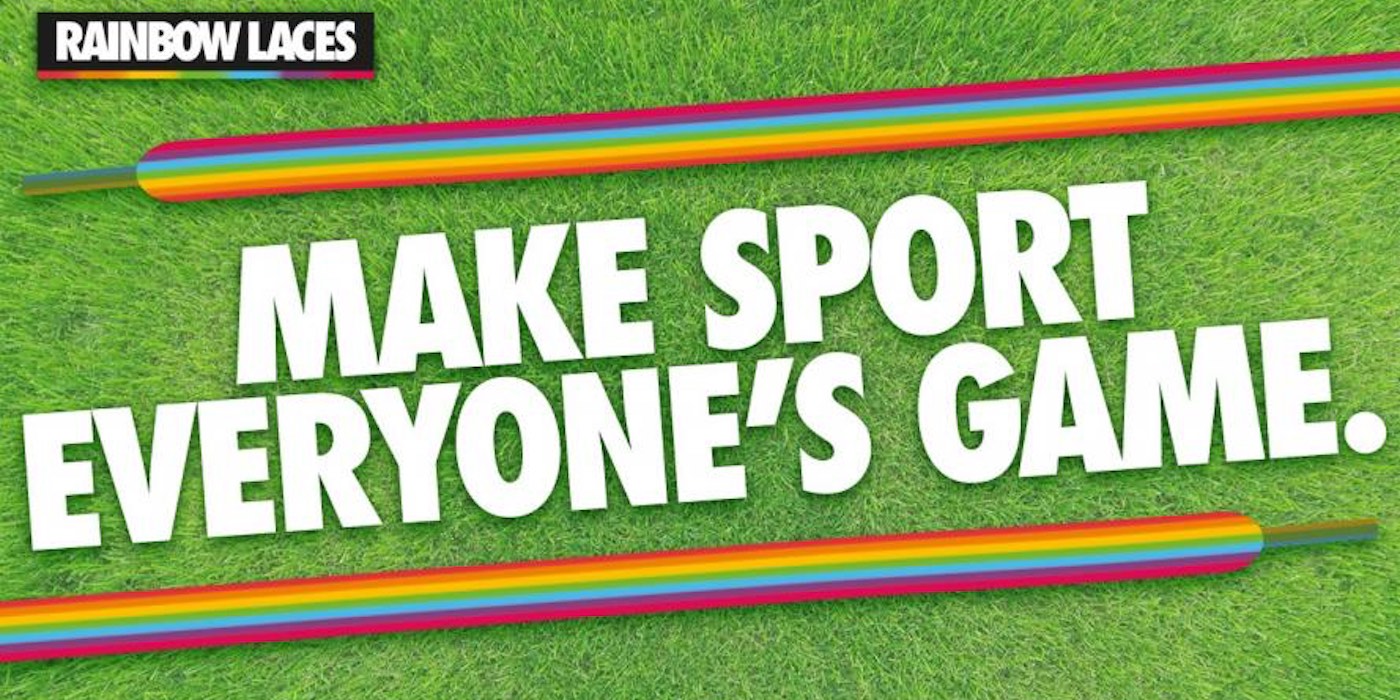 Hector Bellerin has backed the Rainbow Laces campaign and Arsenal’s support of it ahead of this weeks events.

While a small number of players have been open about their sexuality – usually after their playing days are over – homosexuality remains something of a taboo within football.

The nature of fan and terrace culture has changed, but as yet we haven’t had a high profile player come out during their career.

Bellerin has called on the game to do do more to support those who might wish to be open during their playing days, and praised the club for their continued backing minority groups, those with different cultural backgrounds, and more.

“It’s such an important initiative because we need to raise awareness and we need to support our LGBT community to be accepted and I think there’s no better advocates to do that than us, the players, the coaches and the staff,” he told the official website.

“I feel like in football, we’re a few years behind in terms of these kind of issues.”

As for Arsenal’s stance on such matters, the full-back was full of praise.

“I think it’s amazing that Arsenal, as a club, always take it into their hands to support,” he continued.

“Not just LGBT people but also minorities and people from other cultures and backgrounds, as well as people with disabilities in terms of just being accepted into society.

“Arsenal is a club that helps to make everyone feel like they are part of the same family and as players, it’s our duty to do the same.

“I am very proud to be part of a club that just accepts everyone to be a part of this big family.”

Year on year initiatives like this and support from players like Hector and clubs like Arsenal  help chip away at prejudices which may be learned, ingrained through upbringing, or cultural.

We all understand that discrimination of somebody because of their race, their skin colour, or their religion is unacceptable, and the same goes for someone’s sexuality.

Just let people love who they want without judgement, fear of persecution or violence, and without discrimination on or off the pitch.

With all the shit currently going on, can I just say that having a personality like Bellerin playing for, and representing, Arsenal, makes me very proud.

Seems a genuinely decent human being. Long may he stay.

Whoever downvoted this comment ought to crawl back under the rock they came from.

Maybe you don’t rate Bellerin as a player or his fashion sense, but in the context of his comments on tolerance and acknowledging the dignity of others, it’s disgraceful.

How dare he be making comments about anything other than football. He’s just picked up an injury, probably swanning off to a meeting concerning the rainbow laces campaign. Complete lack of commitment to football and Arsenal. My tongue is firmly in my cheek.

At this moment i really cant care less about this.

Scott P
Reply to  The Swede

Maybe take a moment to reflect that during a time in your life where you feel let down by this team (which, at the end of the day, is there for entertainment), that some people feel perpetually let down or pressured by society to keep a core part of their identity secret because of how they will be treated.

The two aren’t really comparable. These issues don’t go away in uncomfortable moments. If you recognize this as a serious issue in our society, as you should, the luxury of deciding when to care simply doesn’t exist.

Homosexuality is celebrated today. Your comment was relevant 20 years ago. This is just more corporate pandering; a time when the rainbow flag is used by such benign corporations such as raytheon and Lockheed Martin.

Canuck Gunner
Reply to  The Swede

Yet you cared enough to post your negative comment.
Good for Bellerin for taking a stance about issues that matter to him.

Rainbow laces are every bit as useless as thoughts and prayers after a terrorist attack…. The same idiotic liberal, lefties who bleat on about equal rights, are the same people who refuse to condemn Islamic extremism and sharia law, an ideology that promotes throwing gay people off rooftops, and the mass rapes of young British and Indian teenagers in this country. Also they refuse to condemn the 52% of British Muslims who think homosexuality should be illegal in this country, punishable by incarceration. But can’t wait to attack traditional Catholic and Christian belief systems that are nowhere near as extreme,… Read more »

I think you mean to say “fuck off, Nigel”

I’ll take that as a complement blogs, Farage is the best communicator in British politics. You bring up a post on rainbow laces, I make a reasoned case why liberals tend to be fart sniffing hypocrites. People quite rightly want equality for all, but then don’t have the balls to address a clear cultural issue that’s detrimental to achieving that very goal, if you’re too weak to address this clear issue? then it’s only going to get worse, as the Islamic population grows, and all the data that we have, suggests there’s a huge problem here, that isn’t improving generationally.… Read more »

Nigel Farage is a racist, a bigot, a failed politician, and one of the perpetrators of the biggest con job ever inflicted on a society in my lifetime. If you feel like it’s a compliment being likened to him, that says an awful lot about you. And none of it good. Your focus on Pakistanis and Muslims as alleged rapists shines a true light on your world view. As if there aren’t just as many white, Christian rapists and abusers, if not more. You’re parroting the racists and xenophobes that spew populist rhetoric. The Tommy Robinson supporters of this world.… Read more »

Farage is the second most successful politician in this country since the Second World War, he doesn’t need to get elected as an MP, he merely needs to exist, as he controls around 6 million votes., and he’s more popular amongst the Conservative membership, than any current sitting Conservative MP. Like it? Or not? Farage has already won, he’s managed to reshape the Conservative Party in his own image, the Europhiles have either jumped or been pushed, and the party is now inline with its membership as a eurosceptic party, after 40 years of bickering over the EU, the party… Read more »

You wrote
“I don’t see the point in rainbow laces, because I don’t think same sex relationships, should be treated any different to heterosexual relationships”
The point is homosexual relationships are not treated equally and the laces are a simple show of support for the lgtbq community.
Rather disappointing how much negative response this gets.

I support lgtbq but condone Islamic extremists. One has nothing to do with the other. Any form of extremism is a real problem. This includes far left and far right and almost all religious extremists.

There is definitely hate for a certain set of people there.. get help, hate is poison, will ruin yourlife..

Hmm. Well I’m big on equality, and I’m against extremism. Of all ilk. I guess maybe you shouldn’t jump to oversimplified conclusions and stereotypes based on personal (or media fed) biases.

It’s not personal or media led, the data we have is from Channel 4, which is the most left wing tv station in the country.

Wow, serious issues with a large group of people there mate. Why is your criticism only with regards to muslims? where did you get your figures from? Wheres the condemnation for the far right, the other religious groups and athiests? Seriously, you need to get your head out of your arse, stop believing what they say in the Daily mail and get out a little. Nigel Farage and Tommy Robinson aren’t the ones to get your views from. The things you mentioned are the views of the minority, and not just the minority of muslims, but other religious/non religious groups… Read more »

I was already worried with his obsession with fashion.. not that I am against the cause but people pick up these things when they think they’ve made it which is dangrous in his case as I don’t think he has. Can anyone point out as to what has improved in his game since breaking through.. crosses, defense..?

Good he is focused on so many other things in life. It’s important no doubt..

But that should be on the sides. I don’t see the same amount of focus on football. To succeed at the top level you need to be obsessed with football.. I don’t think bellerin is..

With bellerin one gets the feeling of a meal which has all the tasty and expensive desserts but with the main course missing!

A footballer’s career is short anyway.. he will get a lot of time to all this after he retires..

You expressed my point better than I did

Well, his ACL has improved a bit since this time last year.

Why do u wanna be open about your sexuality to the football community let alok ne the world.. why is it important to showcase your sexual preferences in peoples faces .. when all we care about is a good game of football?? This is just propaganda to spread the gay movement ehich is probably backed by some group.. they been using the media to really turn the screw havent they.. yet still more important topics havent been backed like stopping war yeah? But being gay is all thr fad right noe along with womens rights and homeless dogs.. thenworld is… Read more »

FYI – LGBTQ goes far beyond sexual preference and you stating it’s a fad clearly displays your ignorance on the subject. I suggest educating yourself about a topic before showing your lack of knowledge to the footballing community let alone the world.

I disagree. I think he needs to educate himself, period.

Fad as in all the big companies jumping on the band wagon.. for marketing dont u agree?? This issue is by far one of the least important in the world problems.. seriously.. if u wan a talk about the Arsenal fanbase youve got say start with the londoners all the acid attacks maybe.. uv got so many dofferent types of Arsenal fans and id say ok one of the least populated are gay.. why havent we seen somethin about Arabs and solving the issues there? Arent millions of Arab Arsenal fans? Or do the gay people get the nod even… Read more »

It’s about treating people equally and with the respect they deserve. Millions look up to and idolise footballers, if they see a guy like Hector making a positive stance on a subject like this it can only be a good thing.

Backing the gay movement is the fad.. dont be that naieve brother thats what i meant also of u wanna take my typos seriously its your choice

Footballer Bellerin is done at Arsenal. Would love to have him as our Public Relations head!

Are animals gay too?