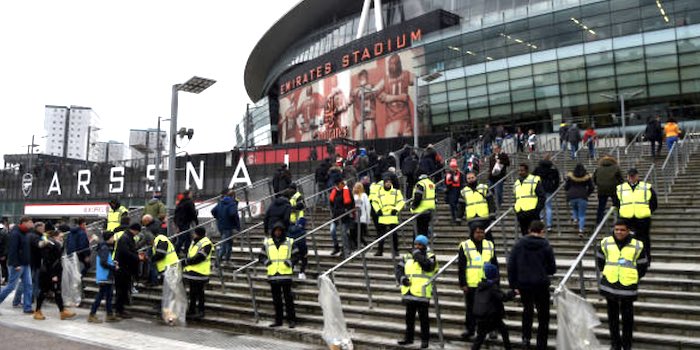 Arsenal have announced that there will be enhanced security measures in place for Thursday’s Europa League clash with Eintracht Frankfurt.

The German side’s supporters have been banned for one game following violent incidents in their away trip to Vitoria, so no allocation of tickets has been made to them. It also meant that Arsenal fans were punished as the game was not made available to Red Adult and Cannon Red Members while the Friends & Family and Ticket Exchange Service will not be in operation.

In an update today, the club have threatened any member who sells a ticket to a Frankfurt fan with a ban and cancellation of their membership. They have also warned that any of their supporters who try to enter will be refused, and even those who do get inside will be ejected if identified.

Arsenal are urging home supporters to turn up early to make their way through a two-part security process, which is detailed below:

Firstly, on approach to the turnstiles, supporters will need to show their physical ticket to stewards. Then at the turnstiles, stewards will make a check of the validity of the ticket to gain access. These measures will undoubtedly slow down entry into stadium for supporters, but if fans plan their journey and arrive in good time, we are hoping that any delays will be minimal.

With the team’s current form, a stadium bereft of opposition fans, and an air of apathy surrounding the club, we could well see a record low attendance at the Emirates.

It currently stands at 25,909 for a game against BATE Borisov in December 2017 – although that was recorded as 54,648 due to the ‘tickets sold’ method in which Arsenal announce crowd sizes.

Waiting for the news like Father Christmas. Only instead of ‘Has he been yet?’, its ‘Has he gone yet?’.

“That’s the worst name I ever heard”

Rule 1. Emery should be relieved of his duties.

Rule 2. If Emery is not relieved of his duties Rule 1 applies

Rather than us checking back here every few hours, perhaps blogs could just blow some white smoke up his chimney when Emery is gone.

I am going to voice the unpopular opinion, after watching Sp*rs match, and after myself criticizing Mourinho, that we should have dumped Emery and put Mourinho in on a 2 year contract. He has got Alli playing in form and has changed the mentality of that team.
I am not sure that Arteta is experienced enough, who’s left? That Italian bloke? Can he speak English? Benitez? I don’t know

based on 2 games? Lets reserve judgement til atleast 4 or 5 games have passed and the new manager bonus has gone from players mentality.
I dont think Moaninho would be a bad manager as far as results go, its his personality and the way he goes about his business that I am not a fan of. Its classless. And I love the Arsenal for the class and doing things in a respectful way, I couldnt handle it the Mourinho way. I wouldnt be keen to sell my soul to the devil to win trophies.

That’s not THE announcement.

Seriously…”Club announce…” I almost pee’d my pants…then I got sad.

Ticket exchange is in operation, I transferred 2 seats to a friend a week ago (God help him!)
#KroenkeOut

He’s not going anywhere Lads. Even if he does after we beat/draw Norwich there is no point. We won’t reach the CL and Auba and Lacca will leave.

Teemu Pukki could really Finnish Emery off at Norwich.

I just cant see more than 20,000 people being at this game given the Thursday night, the extra security, the weather, the inability of red members to buy tickets, the inability to transfer tickets and the teams current run of form. 25k for BATE was one thing but but that was just poor opposition in a dead rubber game in a competition no one really cared about at a time when there was at least some optimism around new management and potentially finishing top 4/winning EL at the time of the fixture. It is a sad state of affairs that… Read more »

It will sell out in no time if they sack the bastard now.

I want Emery to leave as much as you do but there is no need to disrespect him. He’s a man out of his depth but nothing nasty about him

..so if the fans would both arrive early, we can avoid congestion….

Why do stewards need to check the validity of tickets? Surely if you haven’t bought a ticket, your card won’t activate the turnstile?

These additional measures have been put in place to prevent ticketless supporters, or those that have purchased fake/invalid tickets, attempting to ‘tailgate’ or force their way into the stadium, as they should not be able to pass the first check.

Yeah.. this is gonna be an empty stadium

This is a great game to boycott to show your disgust about the way the club is being run. Is a pretty much meaningless game anyway as we’ve all but qualified. Those who do turn up should make clear their feelings about the continued employment of the manager.

I am not convinced we are all but through. Lose both games and they then win vs Vitoria, suddenly we stay on 10 and our 2 opponents progress on 12 each. And this Arsenal team are quite capable of throwing it all away.

I got a feeling Xhaka will play on Thursday. Half empty stadium and we only need a draw to qualify for the next round. Perfect storm.

I think people have to grow up and stop trying to cast one person or the other as villains. 1) the board would be derelict in its duty to simply appoint someone for the sake of change without due consideration into future stability plus how much paying off Emery would cost us (in impact to transfer window spend no least) Clearly the available candidates are far and few. As mentioned we are not as attractive a destination as some prefer to imagine. a)…the likes of Ponchentinno or Allegri can afford to wait for one of the continental big boys to… Read more »

…need I add fans have not helped. Self induced added issues like Granit have further complicated things for an already struggling midfield and limited options further for the gaffer. Clearly we are not any better at Cback without Mustafi as we are with 6m panic buy Luiz on deadline day. The fragility of defense has the club playing with a large element of nerve coupled with the lack of balance in midfield and in general less productivity up front (when you consider number of opportunities generated). The front line in as much as the rest of the squad should not… Read more »

Regarding rotation (which will be important for forthcoming league match that could be the axe for Emery). …I think the manager needs to grow a pair frankly and insist Granit plays in midfield midweek. Tell the Swiss if he continues to rue on the sidelines, it will look very bad for potential suitors. get over it and come back in to help the team in need. I think we need a performance so with due reason, we need a good combination of experience and youth for the Frankfurt match with an eye toward the league match. I would have Kolasinac… Read more »

You lost me with the first seven words of your first book.

I don’t know of a sporting team that doesn’t use the ‘tickets sold’ method to announce/measure crowd sizes.

Has he gone yet?

Emery is on the way out. Pochettino first choice Nuno Espírito Santo, Second choice…. Nuno is apparently most likely. I’d love Pochettino, but can’t say I’m too excited about Nuno Espírito Santo, looks like Raul’s relationship with Jorge Mendez is pushing us in this direction. Wolves are a sit back and counter attack team, which is what Emery has been trying, but hasn’t worked for us as of yet. Hopefully we can twist Poch’s arm, apparently his family are settled in London, it would be our biggest transfer since we stole Sol Campbell in July 2001, if we could pull… Read more »

A supporter should never be placed in a position where they are cheering for a loss, because that might be the best way to get rid of a manager who has less clue what to do with this team than [pick anyone. Literally any single other person on the planet].

What a fucking travesty.

Apparently Kronke is here and Emery is already back in his homeland. But as you all know this is rumours.

And players have been given 2 days off too.

I feel like a kid on Christmas Eve again waiting for that news that Emery has been sacked. Don’t fail me now… Really shows how bad we’ve become when I can guarantee that a new manager will make me excited about Arsenal again.

You can prepare easily 4 checks, as only few fans is going to visit the match. 😉