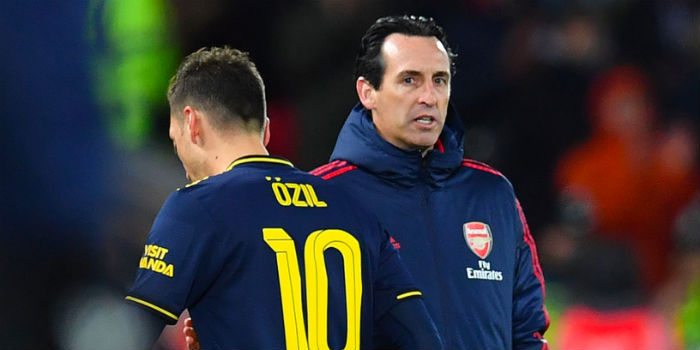 Unai Emery says that Mesut Ozil is in line for a second consecutive Premier League appearance when Arsenal face Leicester in a must-win game at the King Power.

The German international played the full 90 minutes of last weekend’s 1-1 draw with Wolves, just his second league start of the season, but was left out of the squad that drew 1-1 with Europa League opponents Vitoria in Portugal.

With Dani Ceballos injured and Granit Xhaka not in the right frame of mind to play after his fall from grace, it looks likely that the German will play in his favoured no. 10 role ahead of Matteo Guendouzi and one of either Lucas Torreira or Joe Willock.

“I am thinking about him for tomorrow, for the possibility to play.”

Emery also confirmed that Ozil sits fourth in the pecking order when it comes to the club captaincy, which this week was taken off Granit Xhaka.

Pierre-Emerick Aubameyang has the armband outright with Hector Bellerin and Alex Lacazette supporting him.

Explaining his decision to appoint the Gabon striker, Emery said: “The first is Aubameyang because he has experience and he has the respect in the dressing room.

“He was the top scorer last year in the Premier League and also I know he needs time to take that responsibility 100 per cent. But we are going to support him.

He added: “Yesterday Sokratis said everybody can take responsibility as a captain. We want to be a strong family here and I know for the supporters it is very important who is the first face, in front, with the captain’s responsibility.

Firstly, it took him so long to make a decision on Xhaka but he said the players respected him so it was an obvious choice.
Then the same wordplay with Auba.

I don’t think it has anything to do with his English, I think his thought process itself isn’t clear.

No return ticket from Leicester for you, Unai.

Aubemeyang might as well manage the team from the touchline given the amount of service he gets in this Emery team.

In all fairness Aubameyang has 9 this season, bagged 30 last season and shared the golden boot….

God is a Gooner
Reply to  Gana

So reading between the lines. It’ll be Torreira false 9, Auba wide left, Chambers right wing, Pepe and Tierney bench, Kolasinac everywhere and nowhere at the same time and Ozil hooked on 60.

backsakacrack
Reply to  God is a Gooner

I’m so pleased that our £72 million record signing and the most expensive Scottish player of all-time both got the full 90 away on a wet Wednesday afternoon in a meaningless Europa group game so they can be nice and rested for our most important match of the season so far against a direct CL place competitor. Nice one UE, nice one.

You know something about the leadership qualities of Gunnersaurus that the rest of us don’t?

He captains when he wants.

Really hope we get to see Ozil and Pepe play together for the first time. The fact that they haven’t played together yet is a sackable offence itself!

They played together when we played Watford and dropped 2 points

Everything this bloke says screams of someone desperately scrabbling for more time. Everything he says and does is despicable at this club, so weak-minded and pathetic.
I hate to be in this position, but I hope Leicester batter us tomorrow.

I never want us to lose but I see the logic. We are rudderless, we need direction desparately

I have never understood any supporter that wants their team to lose no matter what the circumstances are. Yes you want Emery to leave but that is not supporting your team

I guess the logic is, whatever gets rid of this clown needs to happen

I don’t want them to lose, but the man with gangrene doesn’t want to amputate his leg, either.

If it was a Choice between getting battered tomorrow, dropping 3 points, booting Emery out and is giving someone else a chance or loosing 2-1 tomorrow and dragging Emery’s tenure out till January then doing the same, what would you chose?

But Emery will not be pushed out if we lose. This is Arsenal, for better or worse.

He’s helping us to save piints in the long run. He’s hoping it’ll be something like LDWDWWDLWW for the next 10 games. With Unai it’ll be DDDDLDLWDL. Goooood ebening.

If it was a Choice between getting battered tomorrow, dropping 3 points, booting Emery out and is giving someone else a chance or loosing 2-1 tomorrow and dragging Emery’s tenure out till January then doing the same, what would you chose?

Emery actually might be forced into fielding players in their correct positions.

SB Still
Reply to  Ya gooner

Its forced yes but I think as usual will try to out smart the opposition, shooting his own foot and end up confusing his own team. E.g. Torreira playing forward of Ozil can’t be ruled out. He probably will not start Pepe, put Auba on the left, Martinelli on the right.

You can trust him to come up with something baffling unfortunately 🙁

Cultured determination
Reply to  Ya gooner

Can I be an Arsenal captain too?

The Scourge of Gooner
Reply to  Danger Mouse

The position goes with a poxy curse. You’re okay with that?

The support Auba needs is a midfield that can give him opportunities…..hopefully Ozil is that man. Still want Emery gone though

Emery-like solution: play Auba in midfield and allow him to support himself!

The Teacher says that Mesut is being a good boy so he can play now (probably in some stupid system or position that totally nullifies all his talents), and Wolves and Leicester are really scary, we couldn’t beat them last year so it justifies our dreadful football this year. The Teacher is a right wally.

I have an inkling that Emery’s going to play 3-4-1-2 tomorrow. Chambers – Sokratis – Luiz at the back, Bellerin – Torreira – Guendouzi – Tierney in the middle, and Ozil behind the front two of Lacazette and Aubameyang up front.

I think you’re probably right, though Kolasinac might get the start with Tierney playing midweek. I hope it works, though I’m one of those people who hate the back three. But if it works, it works. I’d love to see Emery not be Emery and go for it, with a 4-1-4-1 or 4-2-1-3, and take the game to Leicester in the old-fashioned Arsenal way, but …

“Wake me up before you go go”

In 49 ”undefeated” years of supporting Arsenal I have never wanted them to lose. Tomorrow is the day I hope Leicester win 3-0. Should be enough to get Emery out the door.
Sad times but it’s for the ”greater good”.
Since beating Spurs 4-2 at home in a fantastic match it has been downhill for Unai … he’s lost the plot and dressing room and we are dog-shite on the pitch.
… thank you, bye bye.

When did such simple things become so complicated?

What? Playing your best players in their natural positions. Who knew!

His decision making is inconsistent for that of a top manager prior to his appointment.
He has become desperate and I wont be surprised he would involve the German
against Leicester.
The foxes are favourites.However I don’t rule out a shock gunner win.Nevertheless
if the gunners were to lose he could probably be fired or delayed.

Emery is a twat. Sack the twat.

Anyone else sick of all the captain talk? Who really cares?? Just stop giving up late leads, FFS!!

It just sounds weak how he wants them all to decide. It makes it look like he has no confidence in his own opinion.