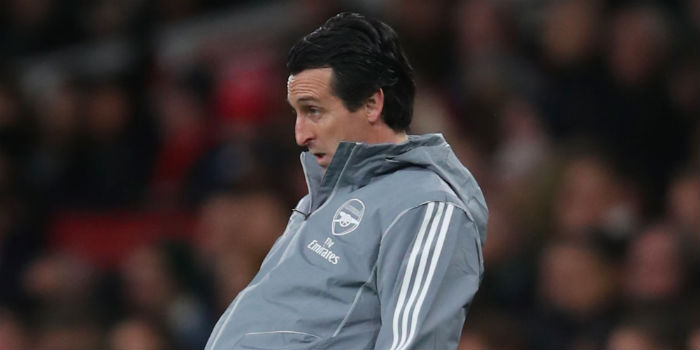 Unai Emery admits his players are in need of a big confidence boost after Arsenal produced another dire display on the way to a 2-1 defeat by Eintracht Frankfurt.

The Gunners, playing against the backdrop of a record-low crowd for a first team game at the Emirates, took the lead in a low-key first half courtesy of Pierre-Emerick Aubameyang’s smart low finish.

The home side had chances to double the lead in the opening moments of the second period, but heads quickly dropped when Daichi Kamada levelled on 55 minutes.

Capitalising on more lax defending, the same player netted again nine minutes later to set up a frustrating final 25 minutes for the few stoic fans who stuck out proceedings. For the second home game in a row, the final whistle was greeted by boos and calls for the manager to be sacked.

Having passed up the chance to qualify for the knockout stages of the Europa League for the second successive game, Arsenal will now have to avoid a five-goal defeat by Standard Liege in their final group game to progress.

Facing the media after the game, Emery said: “I think we deserved more, we controlled the game in the first half, we scored one goal.

“We, in the first half, were happy for how we took the performance as a team and also individually.

“In the second half we started the same, we needed to score a goal but we lost the control of the game after 15 minutes and they scored two goals.

“At the end we changed two players for injuries and we couldn’t do some more offensive changes to achieve, and to take fresh players. We didn’t push, we didn’t really take the chances to draw or win this match.”

He added: “Now our moment is not good. We need to win and we need to gain confidence.

“I think we are better than we are showing, everybody, the players, the coaches and me.

“Now we lost some confidence and we need to win. Really, the response in the first half was good and we started very well again in the second half.

“We had two injures with Mustafi and David Luiz and that moment was important because when you’re losing you need some fresh players offensively to change and give the team more options. We couldn’t do that.”

Arsenal travel to Norwich on Sunday. It seems hard to believe that Unai Emery will still be the man in charge, but at this point, who knows?

Put him out of his misery. It’s horrible to watch.

We need to put a lot of the blame on the players. I didn’t see Emery in the pack of 8 or 9 players who were facing opposition and let them score. Of course, the manager takes responsibility for results but are players doing what they are paid for?

Then go and blame ozil for playing himself on wing. Blame martinelli and terreira for substituting themselves while u need a goal! Isn’t wht thy gt paid for?

We were not playing well but should have been out of sight by half time with the chances we created. Emery should go but he is not to blame if Aubameyang/Willock both try and head the ball in front of an open goal for instance.

It’s getting pitiful at this point. What we need is a big confidence boost inspired by the appointment of an inspiring new coach!

Didn’t he just say that!

We need to gain a different manager.

This has been on the owners and the board since the Leicester game and they are again exposed to be absolute cowards. For how long are they going to be allowed to use “values” and “class” to hide their failures. It’s so phukd up

Can someone end this please for the sake of Arsenal and for Emery too? The stress is killing him, I think considering how he is babbling.

Haven’t his interview responses always read this way? They’re just particularly grating when the performances are this bad.

Why can’t he run himself? Nobody will stop him.

“Now our moment is not good.”

You and your moments can fuck off mate. This very ebening.

All we need is confidence and we will win the league.

I still don’t know why the arsenal still insist using him. Don’t want to sack him. The fans almost boycotting own game already. Their brain still cannot wake up.

Yes, and we will get immeasurable confidence when we get the news that you have been rightfully sacked. He cannot, absolutely cannot, still be here after today. This is dire. We will not win another game of football with him in charge.

Seriously, this man is harder to shake then a stalker ex girlfriend.

Been a fan for over 22 years and this is easily the worst Arsenal team I’ve had the displeasure of supporting. While I agree Emery isn’t the right coach for this club, I can’t see anyone getting much more out of this lot…hope I’m wrong

He’s right about just one thing in my opinion, these players are better than that, but not him. And they will not “gain confidence” with him still coaching them, they simply lost faith in him. It’s outrageous how this continues to happen without a solution, beyond comprehension, seems almost perverse.

Emery needs to just fk off, and take that bastard Xhaka and his smile away from Arsenal.

Completely agree. He can take the 13 who down-voted this and all. Xhaka is a c**t.

“We had two injures with Mustafi and David Luiz and that moment was important because when you’re losing you need some fresh players offensively to change and give the team more options. We couldn’t do that.”

Remember that moment when you took Martinelli off? That was when we became short of offensive players. That was when you killed the game as a competition.

Lol…couldnt stop laughing reading that, thx mate. Yeah, i know, its that bad at the moment…case of better the devil we know than the one we now know is clueless right?

If he is still in charge of the Norwich game, then it means the board is more concern with money rather than team performance, fans feelings and loyalty and the bigger impact it creates for Arsenal football club.

His nervous dithering will never restore confidence in the squad.

We need a strong leader who motivates and consistency for the players. Not a coach who has been ‘searching’ for our lineup and starters the entire season.

Ya, he is scared from minute 1, every game.

The board might give Freddie a shot as a caretaker.
Watching last night match occured to me that Xhaka and Luiz double pivot might work in 4-2-3-1 formation and will accomodate Ozil as the #10 advanced playmaker role. I just hope if Freddie to be appointed as a caretaker he would not easily dismis this to at least try it a few games to see if it works.

Hold on a second. You have Torreira who is a dm. Why oh why would you try to play Luiz in that role?

Proud, you’re already thinking like Dick Emery. Luiz as DM – he’s too lazy in any position. Xhaka too slow and poor positionally.

Two DMs with a back four?; I still think we need another attacking midfielder to get the ball to our potentially deadly forwards. Ozil on his own is too easy for opponents to mark out of a game.

Does he know how to gain confidence?
By winning.

Does he know how to win?
Not so much.

We need to find a new gaffer. But the problem is it ain’t that easy. I doubt Allegri or Ponch want to come to a europa club struggling with a toxic fan base and dubious transfer budgets. Arteta isn’t going anywhere. viera doesn’t look up to scratch, you can make excuses and say he might fit at Arsenal but that is a massive risk to take for the board and derelict of duty. Freddie has even less experience but I feel if we don’t have better solutions, he may have to do bc he at very least knows whats going… Read more »

There is no window for managers (other than the one they’re thrown from). We need to act now so that incoming man has a chance to get/unload players in January window.

We have the opportunity now where we can make a change without it adversely affecting our chances in any competitions.

Midfield will remain a problem. I thought granit did decent first half until the knock. Then he should really have been taken off bc we dropped in output thereafter. BUT Guendouzi was messy coming on and Torreira did not entirely instill anymore control as we were helter skelter after the break. Many times we were pumping the ball right back to opponents (guendouzi a couple of times). For their second goal, we had way too many players defending in the box, no one picking out their players on the edge of the box. Zero organization. Also felt Auba again very… Read more »

If anything epitomises the most pressing issue for Unai its the use of Luiz in midfield. Clearly this area has been his conundrum as he has struggled to find balance between attacking endeavor but leaving holes further back and defensive caution but neglecting press further upfield. Luiz and Granit was an experiment if anything with some caution and experience as other combinations imagined to be effective by many fans have understandably not panned out between Guendouzi and Willock or Torreira or for the matter cebellos. NOne have provided sufficient sustained control. And now we lose Luiz. Its a bit of… Read more »

Santi, you’re being Emery now – too much talking! 1 long post is enough.

It seems the players are deliberately playing Emery out of a job. I agree that Emery should go for a long while now, but the players need to have more pride in themselves.

Please make sure his P45 is waiting in his in tray this morning.

We need you to f*ck off.

To the board & owners! Don’t you dare to let this man continue! Before the end of the season; I promise you only empty seats around the stadium! This is disrespectful, to the club’s legacy, to the fans, and even to Emery! Get a grip or be gone yourselves! The power lies in the hands of the fans. Empty seats now!

Imagine in your work life a manager who keeps explaining his team’s consistently bad performance and his plan on how to address the repeated failure with “we need to gain confidence”. Baffling.
That and “find balance” of course.
Mate, are those your only ideas?

Also if you keep telling the lads they’re low on confidence and you happen to keep not winning games… guess what’s gonna happen? Maybe try thinking two steps ahead, not just one?

The poor bugger needs to be put out of his misery before this get’s any worse. Raul and his cohorts, this is entirely down to you now to sort out and fast. And the players are not covering themselves with glory either because even if they have lost faith in the manager they can and should be playing much better than this!

Agree. Dick is probably a very nice man but is in impossible position (of his own making mind) and his interviews are the result of this. You can’t expect him to say “Yes, sack me now please“.