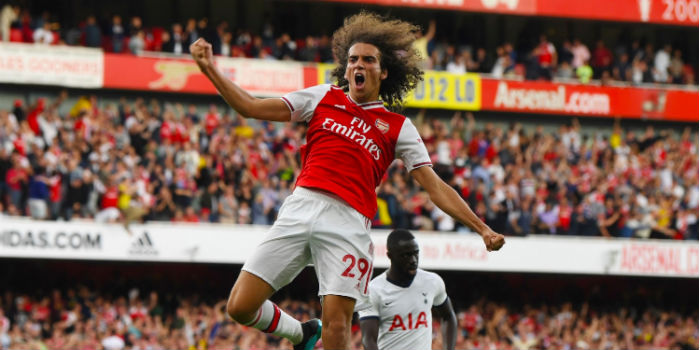 Matteo Guendouzi says he’s delighted to be nominated for the 2019 Golden Boy award and says it’s great that his hard work and development over the last year has been recognised.

Run by Italian publication Tuttosport, the gong is awarded by European journalists to the best footballer under the age of 21 playing in Europe.

Signed as an unknown quantity from League 2 outfit Lorient in the summer of 2018, Guendouzi went on to make an instant impact in his debut season, featuring 48 times for the first team.

“It shows that I’ve been working hard at Arsenal and have also done well at international level,” Guendouzi told Arsenal Player.

“I think it’s a reward for all the hard work that I’ve done at the club and the good displays I’ve produced, but it also reflects my progress in training and how much I’ve come on as a player here.

“It’s a reward for all my hard work and I’m hugely proud to be part of the 20 players under the age of 21 who’ve been nominated for the Golden Boy award – it’s fantastic.

“There are some super players [nominated]. We know there are players like [Matthijs] De Ligt, the Juve defender, and Joao Felix, the Atletico forward.

“There are fantastic players everywhere and it’s a wonderful award for whoever ends up winning it.”

The winner of the Golden Boy award will be announced in just over a month. Guendouzi is currently on international duty with France. He was on the bench for last night’s 2-1 victory over Moldova and could be in line for a debut against Albania at the weekend.

He’s definitely an outsider for the award! But it will most likely go to De Ligt, which would be more than fair.

Still a pat on the back for Guendouzi and a recognition of how he have come since joining us. An amazing progress and while there are still some flaws, he’s a proper baller. Can’t wait to see more of him over the years in red & white!

It’s a real worry he’s not renewed yet, if you want the 22-23yr old version of Guendouzi, then you’ll either need to pay £70+ million, or you have to go through the process of the 19,20,21,22yr old version to get there. If you look at Ndidi at Leicester, he’s only 22, and a few games short of 100 PL appearances, they’re now beginning to see the benefits of the £15 mill he cost almost 3 years ago. If he doesn’t renew? Then someone else is going to reap the rewards of our educational process. Guendouzi has talent, presence and personality,… Read more »

Whenever I hear Golden Boy I think of the Seinfeld episode where he names a t shirt golden boy as it always comes through the dry cleaners unscathed. Probably just me…

Doubt he’ll win but the nomination is well deserved.

Just hope he’s not being overplayed. Burnout would be awful

He has certainly shown his high motor. Remains to be seen if the other essentials will come about. He’s a promising, youthful player in a position that we currently need an experienced, skilled mf.

He clearly stand out on that shortlist! (see above)

Well deserved. He has been one of the brighter signings by Mslintat. Willock too has been impressive. BUT they will have understandably their limits given they are BOTH barely 20yrs and still on a steep learning curve. Giveaways in midfield with risky options taken will definitely happen. BOTH bring energy and dynamism we need going forward always positive trying to exploit the vertical. However we need a bit of balance. Which is why Granit was way more important than some prefer to imagine. He is not perfect (nor is Torreira) but integral toward brning a better balance which Emery has… Read more »

Whilst he probably deserves the nomination there are some amazing players in that list and I doubt Guendouzi will win it. The most important thing is that he doesn’t let this go to his head. Sometimes he believes his own hype too much. If he carries on working hard with humility he’ll be a great player.