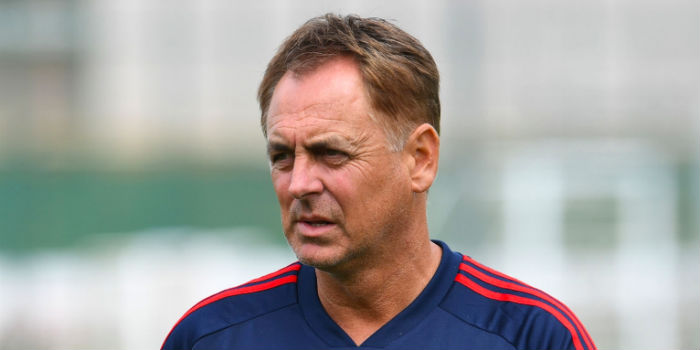 Back in June 2018, Marcel Lucassen was appointed Arsenal’s head of coach and player development. You’d be forgiven for missing it. As the dust started to settle on Arsene Wenger’s exit, all eyes were on new head coach Unai Emery.

As the Spaniard was getting to grips with first team duties, the Dutchman, alongside new Academy manager Per Mertesacker, was casting his eye over the set-up at both Hale End and London Colney.

If you were quick off the mark getting a subscription to The Athletic you may have read a piece by Gunnerblog in September that suggested the BFG played an integral role in hiring Lucassen – a disciple of the Dutch school of football development – having seen him at close quarters working for the DFB between 2008 to 2015.

“What I’m going to do at Arsenal is to further develop the football philosophy, as I did earlier with Al Nasr and the German Football Association,” said Lucassen on the eve of his arrival.

Since then, we’ve barely heard a peep from the 56-year-old.

Amy Lawrence did squeeze a few words from him in March for an article in the Guardian about the next generation of girls coming through at the Academy, however, for the most part, throughout the comings and goings of the last 12 months, of which there have been many, he’s kept his counsel. Until now.

In a very interesting interview granted to Transfermarkt, Lucassen has given an insight into his football philosophy and how he believes the game should be coached.

Here are a few of our favourite snippets.

On laying foundations for a philosophy…

When I arrived at Arsenal, I firstly wanted to know, what the club stands for in general. The problem was that no coach could answer me that exactly. As a result, we collectively developed the ‘Way of Arsenal’, for which philosophy our teams from under-9s to under-23s stand for and also set an example of.

It was a collective project. Because I cannot simply come here and say: That’s how we do it now. I have to convince the people, take them on board and explain why this plan is the right one.

On coaching the basics…

There are six basic principles, which are features of football: Start the attack, create an attack and finish an attack. Contrary to that, defend as highly as possible, as quickly as possible and initiate transitional play. And to whom this is still to complicated: “If you lose the ball, win it back.”

On the importance of experience…

Why does a baker or a craftsman work through an apprenticeship of multiple years? If he baked buns for ten times, he also knows how it works. It is about learning the basics and picking up experience. These skills, I don’t obtain when I’ve been to a block instruction for ten times. I think it would make more sense if the education takes multiple years.

On the importance of feedback and clear instruction…

I’m certainly not a coach that never makes a mistake. But I reflect a lot and look in the mirror. If I expect that it is taken for granted by a player to move in spaces, then he should also take it for granted that I explain to him how it works. And should mistakes still happen then, I have to analyse the situation precisely. Is the body weight shifted in the wrong way? Does he think about the next step already in this situation or did he make this mistake once in ten tries?

A week of training should be designed with a single focus. I have to put the team in situations for them to get awareness for it and for automatisms to develop. I don’t accomplish that if I train defensive behaviour today and transitional play in the next two days.

On giving players room to learn from their mistakes…

Assuming that a player runs towards an opponent and tries to pass him with a stepover but fails. Then there are two kinds of coaches: The first one gives the player hell, so that he never does a stepover again because he fears the consequences. The second kind accomplishes to get a self-reflection from the player with specific questions, so that he thinks about it and decides if a stepover makes sense depending on the situation. [Footballers] are also human beings and need a secure environment to be successful.

On the importance of playing young players…

Why are clubs on a world class level only for a period? Because there will be a rebuilding phase after time, new players from other clubs come in and these players need time to settle in. If I take youth players instead of expensive new signings, they maybe make one or two mistakes more, but they have the advantage of non-verbal communication. Because they played together in the youth setup for years, they know how the other works and especially about the patters of movements. In the end the rebuilding phase is significantly shorter.

I like his approach. I also like the fact I can understand what he’s trying to convey. It’s in English, not mistranslated management BS. Which helps I feel. ?

Also known as the blueprint.

Lost me here;
” ….When I arrived at Arsenal, I firstly wanted to know, what the club stands for in general. The problem was that no coach could answer me that exactly. As a result, we collectively developed the ‘Way of Arsenal’

When they pushed Wenger out they effectively threw the baby out with the bathwater. Emery wasn’t having any of that “Wenger” stuff confusing his position as the boss. We stopped believing in “The Arsenal Way” after Wenger, and instead we embarked on the Road of Fear. Emery may have been taught how to parrot “The Academy is important to us”, but he doesn’t understand what it means. Sadly Edu appears to have done nothing to educate him either. I am wondering what Edu actually does for us. Lucassen’s blueprint for developing players is the next logical step on from Wenger’s… Read more »

A week of training should be designed with a single focus. I have to put the team in situations for them to get awareness for it and for automatisms to develop. I don’t accomplish that if I train defensive behaviour today and transitional play in the next two days. I”

Can he have a word with Emery ?

No it would have to be a few hundred

Ah, how I miss those sweet sweet automatisms.

I just struggle to buy into anything the back staff say. I don’t believe in any of it until we have a proper man with plan. I would take Poch in a heartbeat

Did you read it all?

I spookily just read this on Transfermarkt before actually seeing it on here. If you read it all it seems as if he doesn’t really rate Emery’s method of coaching at all. Interesting that he’s coming out of the woodwork now…don’t you think?

We need to use our loan system better. We should have kept Mkhitaryan+Elneny, and then loaned out Nelson, Smith-Rowe and Willock to go get 40+ games in the championship. Also if Nketiah does start playing regularly, we should sent him somewhere else on January 1st. Lampard is getting a lot of plaudits, but Chelsea have been gearing up to this for a long time, their use of the loan system has been excellent. Throwing these youngsters in at the deep end isn’t doing them any favours, but getting experience and regular playing time will do them the world of good.… Read more »

Have you forgotten all of last season where he simply refused to play Elneny even when resting his trusted regulars?

This guy seems like the real deal and everything he says is the opposite of what Emery does. I just can’t comprehend how Emery got the job or how he keeps it.

Exactly ” I just can’t comprehend how Emery got the job or how he keeps it.”

I suppose Gazidis and Raul saw something which most of us even after 18 months don’t.

So he had this impressive knowledge and dossier on every player and how to improve them, what language did he communicate this in???

Interesting guy. Not exactly revolutionary stuff, but if the BFG trusts him, that’s good enough for me.

Little concerning that it feels like you could run an article on Uday and Qusay’s footballing philosophy on this site, and there’d be a guaranteed minimum of comments along the lines of “more decisive than Emery”, “speak better Arabic than Emery”, etc. But that’s by the by.

Is he our new manager? Oh wait we still have our old one!
One a serious note sounds like he has a good philosophy.

Andrew Allen is a tortoise shell bespectacled twat who deletes comments he doesn’t like. Hey Andrew, catch you around the Emirates you little weasel!

Shut up you bell

I have no idea what you’re on about, champ. Think the fact the above comment made it onto the site would suggest I don’t do what you said. Anyway, feel free to introduce yourself at the Emirates, perhaps we can have a chat over a beer.

Weasels are actually fascinating and hugely misunderstood animals. They’re known to be fiercely loyal, industrious and excellent parents to their many offspring. To use it as a pejorative is simply to channel centuries of superstition and manifest it in your own ignorance and cruelty.

Spooky…I literally just read this article on Transfermarkt before finding it reproduced here.

His comments about what happens when the whistle blows at the start of a match are very instructive to me…they are on the TM site. He doesn’t believe that shouting and waving your arms about helps the players…for me that was a pretty big criticism of Unai and his style of coaching.

I love the fact he used the word “automatisms”

Reading the article just makes me appreciate Wenger even more. Things went stale at the end but his philosophy was never in doubt. Never quite understood why he always seemed content to remain seated when things were not going well and yet now I appreciate the logic in the fact that players can barely make out what you’re saying over the noise from 60,000 fans….oh we had it so good for some time.

If only we had got Lucassen in a year or two earlier. Wenger working with Lucassen for the long term betterment of the Club. Would have been a marvellous move.

“When I arrived at Arsenal, I firstly wanted to know, what the club stands for in general. The problem was that no coach could answer me that exactly. As a result, we collectively developed the ‘Way of Arsenal’,” – This is worrying and part of the problem of the current director level set up. I’m certain in Wenger’s era coaches and young players would say teams were set up to emulate the first teams philosophy and style of play, and didn’t Gazidis say the club wanted to maintain Arsene’s values? So, within days of our manager leaving that gets thrown… Read more »

I don’t think the owners ever understood Wenger’s philosophy. They certainly didn’t try to do anything, like hiring Lucassen, before pushing Wenger out. Then again, they ain’t football people. That they allowed us to be managed by a man with a crappy record in league finishes tells us that quite clearly. Winning a league doesn’t seem to hold a lot of importance to our American owner. It seems to be all about winning the biggest, shiniest Cup in a knockout competition. I wonder if that is an American thing? Do Americans cream themselves over their team topping a conference, or… Read more »