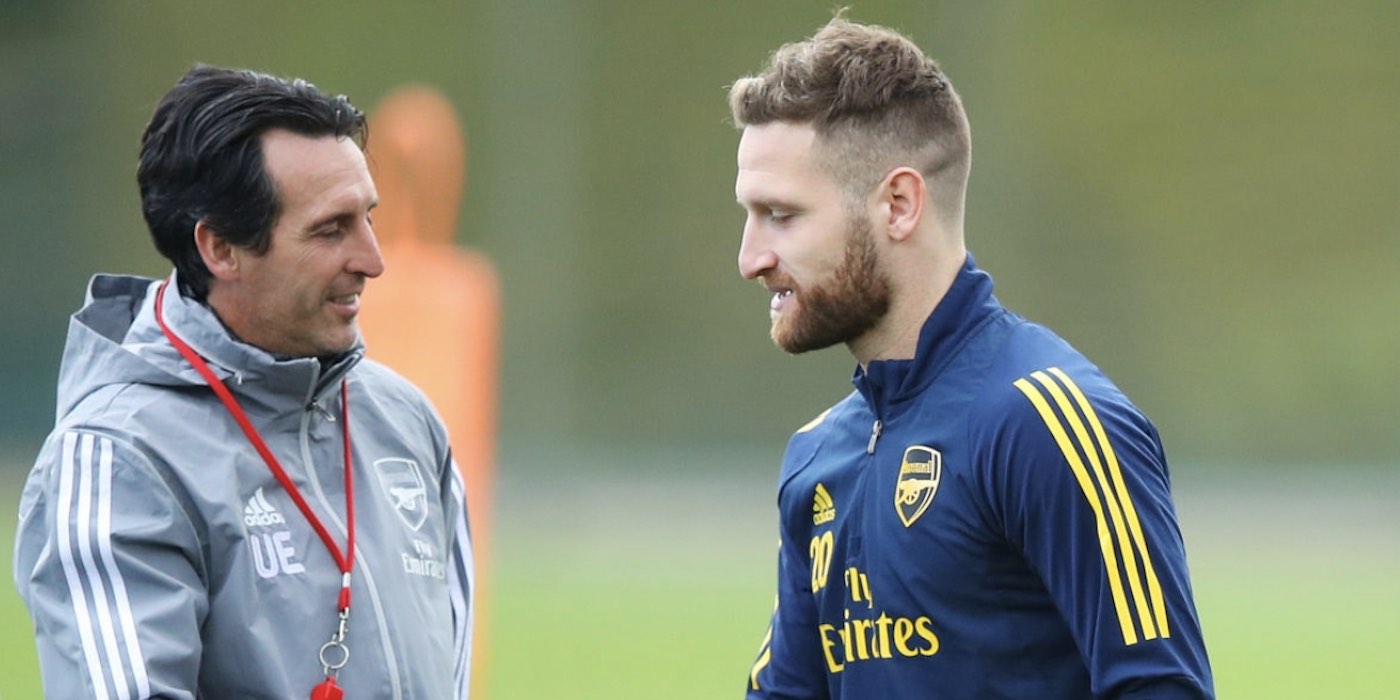 Shkodran Mustafi says that it’s not easy to play against Eintracht Frankfurt because they have a coach who has imprinted a clear identity on the way the team plays.

At a time when his own manager is under serious pressure, the comments might read as tacit criticism of Unai Emery and his constant tinkering, but the former German international made it clear that Arsenal will have to be fully focused to take all three points tomorrow night.

The Gunners won the first leg 3-0 in Frankfurt, but in truth the scoreline was a little generous towards us based on the balance of that game overall, and Mustafi – set to start for the fifth time in the Europa League this season – didn’t sound like a man taking anything for granted.

“Frankfurt is a team with a coach who has a very good identity,” he said.

“You can tell their idea of the game and how they want to play. Nothing is random, they’re very coordinated.

“The players knew what to do, how they were moving and it’s always difficult to play against very organised teams.”

“Even if you know how they play, you can’t always anticipate it as a defender. If you anticipate their attacking moves, you may open up different spaces for them to capitalise on.

“It’s a team with attacking strengths so you have to be focused for 90 minutes. They don’t hog possession without gaining any space. They’re very organised on the ball and want to get it back as soon as possible.

“It’s hard to play against teams like these. It’s not easy.”

Rob Holding is back in training having missed Southampton due to injury, and could line up alongside Mustafi at the back.

Hector Bellerin misses out with a hamstring strain, while Unai Emery hinted that there might even be a recall for Granit Xhaka.

“He’s in the group and has the possibility to play tomorrow,” said the head coach.

“I hope every supporter supports the team. Xhaka’s comeback is going to be important to us.”

A Different George
Reply to  TheG

Possible meaning: “If we had a manager who gave Arsenal a sense of identity, where everything was coordinated and nothing was random, a team who don’t hog possession without gaining any space, who are very organised on the ball and want to get it back as soon as possible…

… if we had a manager like that, perhaps the central defenders would not be under so much pressure for so long that mistakes become inevitable, and the lack of structure means there is no cover for those inevitable mistakes, which therefore determine the outcome of matches.”

Xhaka? Return? An insult to all genuine Arsenal supporters.

Not without the team voting for Mustafi

Is this real liiife, or is this irony!

Is he having a dig at Emery here, or is he just repeating what he’s heard from the coaching staff all week about how good Frankfurt are?

Watch the video and make up your own mind!

“Frankfurt is a team with a coach who has a very good identity,” he said

At which point he stood up, dropped the mic and walked off

Would have more approbo if Emery’s face would have been blurred out.

Off topic but the attitude our players need is what got Sterling kicked out of national team earlier this month.

To be fair, I can see Guendouzi doing what Stirling did to a opposition player too, if he was more established in the French national team of course.

Not only is that a brilliant cheeky dig at the coach it’s a great bit of PR for himself.
Hope he plays a blinder tomorrow

I dropped Mustafi’s comments into my Emery-to-English sentence-mangler. This is surely an accurate translation to Emernglish: “You can tell their conception of the game and how they optate to play. Nothing is desultory, they’re very coordinated. The players kenned what to do, how they were moving and it’s always arduous to play against very organised teams. Even if you ken how they play, you can’t always anticipate it as an advocator. If you anticipate their assailing moves, you may open up different spaces for them to capitalise on. It’s a team with assailing strengths so you have to be focused… Read more »

Mustafifffy game to get Emery sacked.

you know you’re fucking finished when a player like Mustafi starts openly taking shots at you. Jesus, it’s getting bad for emery now….

Every interview we give now is just about how tough the opposition is.

What happened to being the mighty Arsenal? We’re acting like a scared little team these days.

Hope the new manager brings back the aggression and self belief that befits one of the biggest clubs in the world.

Maybe they’re just being realistic. Frankfurt won’t be easy opposition. To honest I was surprised we beat them 3-0 and I know they were down to 10 men for 2 of the goals, but even so, early on they looked to have the impetus with them.

I’m starting to think it’s the fans that have the inferiority complex and not the players.

“Bigging up” the opposition again, from a player this time! What on earth is going on here??#Noconfidence

Yeah whatever. Now, when does Nuno start?

If Xhaka’s comeback is important for us, then we have a problem. I’d rather experience a comeback of the black plague in Europe, than a Xhaka comeback in an Arsenal jersey. I wish him no harm, only luck and success somewhere else, but please stay away from Arsenal, this bridge is burned for me. But as we always say, he doesn’t pick himself, so it is actually not his fault this time. Club and coach seem to think that there is a way back for him. Since they run the club and not me, they can do that, but without… Read more »

Arsenal have been even worse off since xhaka got the bin. Instead of marginalising arsenal’s (perhaps best) midfielder, arsenal need to bring him back to the squad so the new manager can put him to better use when he inevitably arrives

Agreed, no matter what you think of how Xhaka acted or performed the bottom line is the team have been even more shit without him. The way the fans reacted, I think has had serious knock-on affect to the way the club is perceived by some of our top stars, Auba being one.

Xhaka getting support tonight may go some way to mending the rift between the fans and the team, or we can act like children and boo and slag him off because that will really help performances won’t it?

Seriously! now people are starting to think Xhaka was actually good. Just because he’s not in the team doesnt mean, he suddenly developed enough agility to rival Kante. He’s still the same old Xhaka who commits criminal fouls due to his lack of agility/Mobility. He still too slow on the ball, doesn’t have the technical ability of a top midfielder, and has the decision making ability of a 12 yr old. I know things are bad, but Xhaka isnt the solution to our Problems

It’s like the old saying “there’s no better player than the one who’s out injured or the one who told the fans to fuck off while throwing the armband to the ground.” Don’t get me wrong, I’m not holding a grudge against Xhaka for losing his shit, but I’m also not going to just lie to myself about his quality of late.

Mustafi to take over as manager!
Sounds like he knows more tactics than Emery.

Picture caption:
“Get the fuck out of here”
“After you boss”