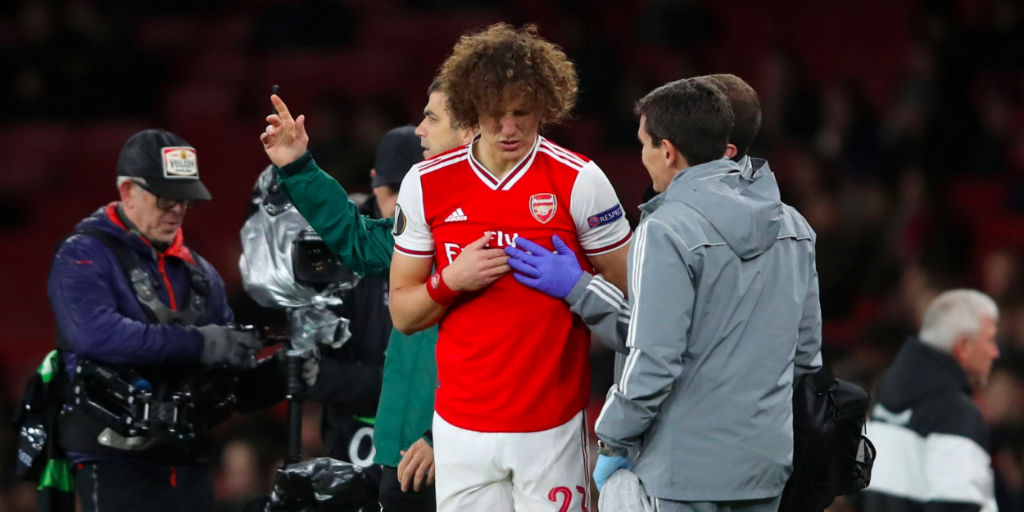 Arsenal have confirmed that David Luiz and Shkodran Mustafi are both doubts for Freddie Ljungberg’s first game in charge after suffering bruising to last night’s 2-1 defeat to Eintracht Frankfurt.

Luiz injured his ribs colliding with an opponent and had to be substituted before half time. The Brazilian had been deployed as a defensive midfielder alongside the returning Granit Xhaka.

Mustafi went off in the aftermath of Frankfurt’s second goal. Keeper Emi Martinez appeared to step on his left foot. It meant Xhaka moved back to partner Sokratis.

Sead Kolasinac, who’d been nursing a tight hamstring, is available for selection, however, Hector Bellerin is a doubt and Dani Ceballos remains sidelined for another couple of weeks.

Rob Holding wasn’t in last night’s squad but we’re assuming he’s fine and is an option to partner Sokratis. Calum Chambers and Kieran Tierney are available in the full-back positions.

I don’t know about the rest of you but I’m just going to take this game by game looking only for very slight improvements in organization and balance. I have absolutely no expectations of a top 4 finish or winning any cup. Still, I’m all for Freddie and I believe we will be heading in the right direction.

Same. Freddie is early in his career, so O have minimal expectations.

The youth he coached here seem to have come through with some spirit and confidence- it would be a huge bonus if he could bring any improvement at all in that department to the first team. But given how shorn we are of both, there is no way I’m going to have expectations about such things until it is a person in full appointment at the helm.

Id like Freddy to appoint a new captain i dont have confidence in auba as captain he doesnt take the role seriously. hes a jokestar. thats not saying thats a bad thing its just as a captain you want a leader not a clown

Freddie was a pretty hard nosed player is in day. Hopefully that rubs off on some of these guys. Togetherness, more intensity, and drive will bring back the confidence. Yes we have some holes, but we have been getting out worked for most of this season.

Haha, that made me laugh, but judging by the downvotes, it’s still too early for jokes like this 😉

Bang on! Let’s get behind the man, Freddie is a legend.

cautiously optimistic. hopefully the players respond to the fresh “air”

Every man and woman is a captain!

I’m a captain and so is my wife!

Gunnersaurus is the obvious choice

man, I didnt see luiz injure himself and when he went down clutching his chest I thought he was having a heart attack!
glad he wasn’t because A) I’m not a c**t and B) I think he was working well as a holding ball winner.

I don’t care so long as we stop being so negative. We set up to be scared of the opposition so no wonder the players wondered about how good they were

Let’s hope we can all start on a clean slate, forgive Xhaka for what happened and support the new manager when he arrives and for the time being Freddie with whichever players he chooses.
Let’s pls not boo the players let’s all stand together

Xhaka must go. Freddie knows he can never play for us again.

You realize he played for us yesterday right

Mustafi and Luiz out?
Permanently I hope….
As for Emery I feel sympathy for him, never nice to see anyone lose their job.
Its not all Emery’s fault mind you…
The squad is average at best – Mustafi, Socratis, Xhaka, Ozil etc. are just a waste of space.
The recruitment arrangements are pathetic.
Edu and Raul should be under more scrutiny – their signings aside from Guendouzi and Martineli have been very poor…
Arsenal are a shower – who would want to work in such a toxic club and with no money…

Mustafi (next to Chambers at RWB) was quite solid yesterday and Luiz looked promising next to Granit last night in holding mf before he got injured, this is what we need the opposite of!! We need to inject confidence in our players, so let’s stop with the negativity because there’s plenty already in there that first needs to be drained – we can start off with a win against Norwich

Rich
Reply to  Me2

Gary Neville saying Luiz, Sokratis, Mustafi, Xhaka are uncoachable, and it’s hard to disagree, the type of mistakes they make, are unlikely to be rectified by better coaching, maybe if they legalised amphetamine or pumped them full of Ritalin, you could drug them into concentrating better? But all are experienced internationals, and their flaws are otherwise here to stay. Our recruitment has been very poor for a long time, as has our timing in allowing players to move on. Emery appeared to have lost the dressing room ,and was no longer getting a reaction from the players, I’m just not… Read more »

Yep, the recruitment has been poor for over a decade now. Far too many of our squad believe donkey work is beneath them, when in fact it’s the key to be successful.

Our attack is clearly better than all but two English clubs. Our first-choice full-backs are on a par with Champions League squads. Even our centre halfs are not, in fact, worse than (for example) Chelsea’s first choice of Zouma and Christensen. We absolutely are good enough to contend for top four.

Runzac
Reply to  Me2

The me2 revolution hit you hard poor fella.

Mustafi out…..so he’s got that going for him.

Chelsea number 8 is doing well I reckon Freddie can do the same!! Come on the boys

It never rains but pours. To compound issues for poor Freddy just taking over. It will be difficult for him as well since the match is coming so quickly off the heels of the midweek debacle. Frankly, whoever is available has to just up their game. In defense, that would mean likely (if Holding is available) then Rob and Sokratis but potentially if not, Chambers may have to tuck in with AMN. AMN will need to keep his head screwed on and see this as an opportunity. His discipline and concentration level (freddy should remind him) may see him out… Read more »

When Santori speaks, we listen!

We’ll see what happens, but this was the right choice. If Freddie does well over the full year, then why not give him a shot long term? Lampard is working out well for Chelsea(though not so much for Oli), and Pep had only managed Barca B before he took over there.
If it turns out not to be the right choice, we can switch in the summer. But things can hardly get worse than they were under Emery. Freddie will get a lot more support from the fans, which should help all the way around.

We will have a new manager within days so talking about Freddie being in charge for a year is irrelevant.

Can’t believe all of these managers describing Unai as an outstanding manager etc and Gary Neville spouting his crap about us not signing the right players and how he’s been brilliant everywhere else??? Emery was scared to play everyone! We have the players to tear teams apart but we weren’t doing it. Hopefully now we will show our power

As far as I’m concerned it’s a new start for everyone now. We will see if anything change with players who have underperformed. Then we can tell if it was tactics or they just can’t cut it here.

I would be ecstatic if we could just get scoring again. I would rather lose having fought than lose having been out fought.

A man can dream

I hope Ozil will be our power hourse again…