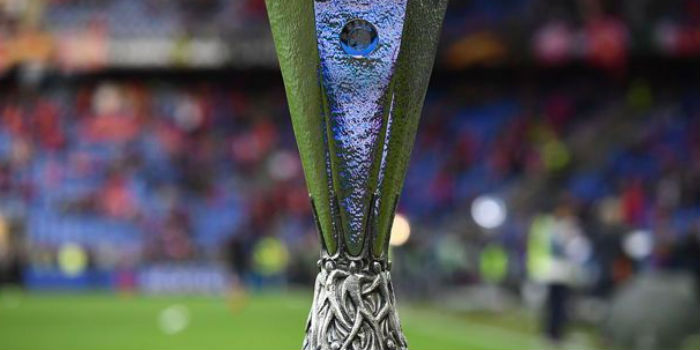 Arsenal will face Olympiakos in the first knockout round of the Europa League.

We have a mixed record against the Greeks who we’ve faced in the Champions League on four separate occasions – 2009, 2011, 2012 and 2015. We’ve won all four home games and lost all four away in Athens.

The Gunners secured seeded status in the draw after finishing top of Group F on Thursday courtesy of a 2-2 draw away at Standard Liege.

Matches will be played on 20 February in Athens and 27 February at the Emirates; both 8pm kick-offs (UK time).

Having been to the semi-finals in 2018 and the final last season, we’ll be hoping to go one better this year.

Having been cut adrift of the Champions League places on the domestic front, this competition represents our best bet of sneaking our way back to Europe’s top table.

The glamour tie. That’ll draw the crowds back in.

Can someone explain how as a group winner we’re able to draw one of the teams to drop down from the CL? What advantage is that supposed to be?

The Voice of the Noise
Reply to  Crash Fistfight

This is the EL, mate, none of this makes any sense.
Kind of like how the final last year was played in a country one of our players couldn’t enter out of fear for his life.

The advantage of the group winner is that they cannot be drawn against another group winner. The CL dropouts were split into 4 “seeded” = stronger teams and 4 “unseeded” = supposedly weaker teams. Arsenal could have only gotten the 4 unseeded teams from the CL. However, I agree with you that on paper some of the EL group winners are certainly weaker than the unseeded CL dropouts.

Maybe a fairer method would be that in this round group winners strictly play against runner-up teams and the CL dropouts only play among themselves.

Seems a much fairer way to do it.

Aye, but then by default 4 potentially ‘bigger’ CL teams will be out of the EL and with them will go views and sponsor money. Powers that be will always put revenue ahead of what is fair.

CL dropouts should have NO place in the Europa competition.

Looks like the end of the road is in sight…

but don Vito Mannone trying out an air kick to stop a shot in his box will always be my best memory. we even had Tom Cruise at left back in that game

Joel Campbell really made me believe that game

…that pass… I thought that was it too, Joel Campbell had arrived.

The Voice of the Noise
Reply to  Spanish Gooner

Olympiacos is an ok draw, although they’ll come in with all the belief and fighting spirit Arsenal currently lack. I believe we’ll go through, but that our EL stops in the next round, which might be our last international games for at least a year and a half.

Guys, as I have all Olympiacos games in the CL, I can tell you that the 4 points they accumulated were not the real picture. They battered Spurs in the first game which ended 2-2 and played very well against Bayern as well. If they play on the same level it’s going to be a very difficult tie…

To be fair, that was Spurs during their worst run of form in years and Bayern around the time Kovacs got sacked.

Still tough opposition, Olympiacos haven’t lost in the Greek league and only conceeded 5 all season. SLG is a poor league but they’re looking solid… but worth noting that both of those teams weren’t in a good place when they played Olympiacos and they both still qualified out of their CL group.

At least there’ll be some atmosphere in the Emirates. From their fans I mean.

Weather we like it or not we have to face better teams in order to improve our game other wise how shall we know the level of our game when we dont play strong teams.

They’re not a good team mate, but probably better then us.

Depends on the weather…

Olympiacos is better they will win 4 to 2 on Aggregate

I think the league is gone for us. Its a salvage job from now on to scramble for 5th or 6th at best till end of season. BUT we are still in a decent shout in Europa. Teams we should be concern with Inter, United prob Wolves although in current form, anyone can beat us. Olympiakos should on paper be a decent draw for us. We went there some seasons past with Wenger needing result to stay in contention in CL with a midfield pinned together by Ramsey and Flamini that delivered a must win in hostile environment and under… Read more »

Isn’t that exactly what Freddie did with Ozil yesterday?Yanked him after another Ozil no show!

I don’t care who we get in as coach, we’re never making 5th or 6th this season. We need somebody to keep us up. That’s our level now. It’s not just two or three players that are being lazy. Its an entire squad who no longer believe they can win. Any small hope they might have had after West Ham is surely gone now. We’re utterly useless against top 4 teams, hopeless against 5th to 6th teams, horrible against mid-table teams, and have needed luck to draw against the teams in the relegation places. We cannot compete at Premier League… Read more »

We are not going anywhere with our defence.

First thing we need to do is formally introduce our defenders to our midfielders so that they can learn to be comfortable in each others’ presence and won’t mind mingling together on the football pitch.