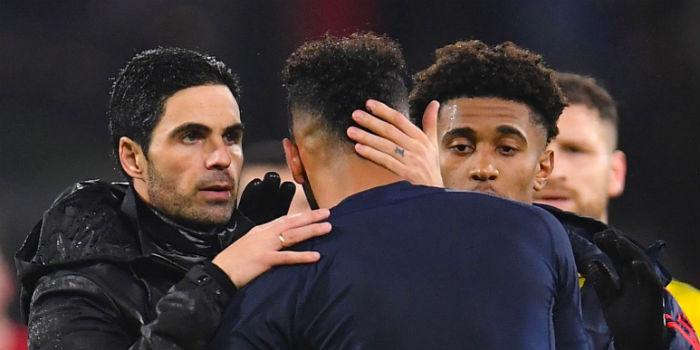 Mikel Arteta says he could see his hard work on the training ground bearing fruit in his first 90 minutes in charge of Arsenal although he accepts his players have much to improve after their 1-1 draw with Bournemouth at the Vitality.

Dan Gosling opened the scoring for the home side against the run of play and even though the Gunners equalised with plenty of time remaining, we couldn’t manufacture enough quality chances to edge in front.

With games coming thick and fast, Arteta doesn’t have much time to get his ideas across but he thinks he can see progress already.

“I’m very pleased with some of the things I’ve seen, in terms of attitude, character, the passion we showed, and the fight and spirit the team showed,” the Spaniard said.

“It was spot on. Probably better than I expected over 90 minutes. A lot of things that happened in the game, we prepared. They understood them and they tried to take them on board. We lacked the final product at the end.

He added: “It would’ve been great [if we’d won] because it would’ve given us a better lift in terms of the energy and confidence of the team, but we have to analyse the performance.

“There are positives to take and obviously is a lot of room for improvement in other areas.”

It’s been pretty obvious to anyone watching Arsenal this season that we’ve been performing at less than the sum of our parts. Rebuilding confidence is a core aim for the new boss who thinks it’ll require patience.

“It will be a process,” he said. “I was worried what would happen if we conceded a goal. We did and I was very pleased with the character they showed.

“They came in at half-time and their faces, their reactions [were spot on]. It was about how much they wanted it. Normally, when you are in this process and you concede a goal, the confidence goes down and a lot of things that have happened in the past can come back.

“It didn’t happen, it happened in the complete opposite sense and that’s a really positive thing to take on board.”

Word of advice, just post your thoughts and not scroll around for others view. Like you for me it was pleasant, looking forward even more to match at home against Chelsea.

It would have easy for him to bin the seniors, but he chose to give everyone a clean chit. I am feeling confident with Arteta from the moment he walked in. I was fine with Freddie taking up the job, but Arteta looks like he knows what he is doing.

Lack of Perspective
Reply to  Comedian

If he can get Ozil to do what he did today more often, and lacazette and the rest put away some of those chances. We might be alrite in the end.

I have to agree with him, we didn’t lose simple passes too often as much as we use to, plus toward the end you could see the team really wanted more, there is just some individual mistakes but I think in time will all be swell. I was actually more impressed by Xhaka ability to take those long passes most of them reached a target, and that Luiz ball to Laca should have been goal. I guess those lessons about space and teammate are about to pay off. Coz I can see with proper tools we will be unplayable 60+… Read more »

More a Toreira if injured, hasn’t got the passing ability of Xhaka

A Different George
Reply to  Kaleja

Of course, we all knew Xhaka can play those long passes and that Luiz is one of the best centre halfs in the world at that. What changed was the structure in which they were playing–Luiz stepping out didn’t immediately threaten chaos behind him; Xhaka’s lack of pace didn’t mean that every poor pass resulted in a chance for Bournemouth.

Behind closed doors he should be much harder on them. Some of the passing, shooting, crossing, defending, and decision making was just terrible. I feel we had the chances today to win and we blew it. Hope they step it up, or leave and let hungry players play for Arsenal.

He brought them in on a Christmas morning, think he’s being tough enough.

Nelson and Saka really need to learn to cross.
.

I forget, how old is Saka?

Chelsea is better at every position in the team than bornemouth. I say let Pepe play….

Does he presss from the front yet ?

our strength is in the final third. But today they let us down. It happened to me once in my college days. It took a lot of effort to rebuild and I had to win the ugly way. That on a minimum budget but once things clicked, well.

Point is Chelsea and the bunch in between aren’t too far away. 4 points from the next two games and we’ll be in with a shout

Are you the musician ?

Thought we played well, certainly the midfield had much more control than usual. Given it was a make-shift back 4 I thought they also did alright!

I think it is right that he is giving everyone a chance to prove themselves/enough rope to hang themselves with. I actually feel positive about it and my god it was good to see and hear Mikel directing and guiding them from the touchline.

I can just give my point of view. For me Arteta is not Arsenals head coach. He is already the manager. And he transmits what Arsenal is, and why I fell in love with this club. I will support him all the way, and I know that there is no quick fix. It’s been a long time since we have outshot an opponent.

Arteta, Freddie and even Edu and Per are all key people to bring back Arsenal. Hope they love the club and don’t just see this as a job alone. Neither Raul or Kroenkes give me much confidence and even less love for Arsenal.

As fans we need to be patient, as we lost quite a bit of ground and even performance to turn it around quickly.

We just need to lure Dennis back, bring Gilberto Silva a role, same to to Bobby, bring Santi and Rosicky as coaches, and I’ll be happy

Right across Sunderland!
Reply to  Espen

He needs time. Not sure he’ll get it from some of our fanbase though.

He’ll get it from the rest…

I’m certainly backing him. I’ll be holding him to his word though about being ruthless. To be a CL team we need a fair amount of changes within the squad. It’s going to take time.

Merry Christmas all I am usually the glass half empty kind of guy but I already see the blueprint of How we are going to be playing in the future and its pleasing on the eye Our first choice wengers (Martinelli and Pepe) didn’t play , same with our left backs kolasinac and Tierney and bellerin were all missing through injury and yet we had 60 percent possession against a Bournemouth side that’s a complete possession team on their own turf is nothing to be sniffed at. I am being cautiously optimistic, but if we had any of our first… Read more »

Defensively we looked more organised. People whinged about Nelson’s performance, but he was there over Pepe due to his improved work rate without the ball. Hardly any attacks against us came down our right. He doesn’t offer anything like the attacking threat Pepe does, but until Pepe is prepared to work harder without the ball..he’ll never make it at the very highest level. Still, it’s likely of us can see the positives. Just a shame that a few loudmouths on YouTube are being totally negative as usual (for cash handouts from mugs). One from a former aftv regular (some on… Read more »

It’s obvious there is an improvement…good times ahead
COYG!

Feel very positive about the team. Loved the positioning of the fullbacks and the rotation of the midfield providing defence when they were up the pitch. Just a shame Laca didn’t bury his chances but it was absolutely pissing down, made a bit harder

We looked way more committed than we have for a long time. The pressing and positioning on the pitch was better, the passing was crisper. We dominated in every way and it’s great to see that, especially in an away game. There are green shoots appearing out of the manure.

A few good signs of improvement. I noticed in Freddie’s last game the triangular first-time passes were suddenly there. We need to be quicker, and take more risks with our build up play.
The lack of confidence is showing up front, we need to put these half chances away in a game like this to get the points.
Loving MA already though, fully behind him.

I mean nothing to get carried away about. This was in context a very poor Bournemouth side with six recent defeats and many of their first team out. And we struggled to a draw. In fact we have sunk so low that many fans prepared to celebrate another draw when we really needed to take all 3 points regardless if it was Arteta’s first match in charge (See Ancelotti) A LOT of room for improvement. As mentioned, positives in midfield with Granit and Torreira playing closer (to each other and defense) and to their strengths. Also structural changes with Granit… Read more »

I think we also had better success finding passes (Granit) to players higher up the pitch. Where many of the front players tended to simply wait for the ball or get marked out before, the tactical switch dropping Granit into a back 3 to orchestrate allowed wide players like Saka forward and created five across the front which meant we gave Ozil and Auba better freedom to escape their markers with two more players to preoccupy the fullbacks. We saw Granit (and on one occasion Luiz) put in a lot of long through balls picking pass thier midfield press or… Read more »