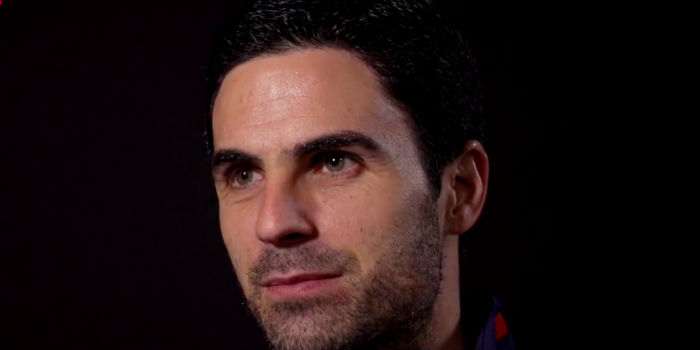 Mikel Arteta is set on re-educating Arsenal in the art of controlling football matches but says his players will have to be “on their toes” every day if they are to improve.

While the Spaniard was pleased with the way the Gunners implemented his tactics during his first game in charge at Bournemouth, particularly when out of possession, he knows it’s going to take time before they reap the full benefits of his football philosophy.

Ahead of his first game back at the Emirates, the Spaniard reflected on his players’ Boxing Day efforts and what he wants to see next.

He told Arsenal.com: “There is a still a big room for improvement, but that’s every day, being on their toes, being demanding with them, being challenging with them, and convincing them that if they do that, straight away they don’t have to run as far, they will be more organised, they won’t fight with each other because one is not doing what is required, and they will control the games better.”

He added: “I would like to start to see a little bit more control in some situations, and more awareness of why things happened.

“The players have to understand two seconds earlier the picture that is coming, and where the solutions are. But that will come over time. They will pick it up.

“We don’t have much time to train in, I only have I think two sessions in one week with the starting XI, which is nothing. But through video, through talks, through individual meetings, slowly, they have to embrace that information… and we will start to build some fundamentals and principles that as a team will help them.”

All of this makes us happy. While a top four finish looks out of the question at this point, there’s still much to play for in the Europa League and FA Cup. So here’s hoping the players are quick on the uptake.

I hope this doesn’t turn out to be a false dawn, but he certainly talks the way I want our manager ( yes, manager) to…

I like Arteta as a manager so much that I’m already getting worried about Barca nabbing him from us in a season or two. How crazy is that?

Don’t worry Helder, England presents a realer challenge to any intelligent person. And that’s just one of the reasons he won’t leave if he thrives

Yeah, I wake up every morning, eat some tepid porridge, put on six layers of clothes, rub the grime and frost from my windshield and drive through the grey, desolate streets while thinking – I’m so glad I don’t live in Catalunya.

I don’t think we should worry too much about that.
Mikel seems to have an affinity with the club, going back to before he was playing in Scotland.
If he does well I see him staying for a long time and turning down overtures from abroad. (At least I hope so)

Mikel has impressed me so far with his straight, no nonsense demeanor. An obviously smart guy with a certain steeliness forged from his early days with Glasgow Rangers where he grew up as a footballer and eventually flourished in the old firm environment. Takes grit to do that.

If I was a lightweight, overpaid piece of deadwood I would not want to fuck with this guy.

Exactly my thoughts…you good sir are dead spot on!

The next Pep or rather the next Wenger. Arteta is heavily influenced by the Barcelona and Arsenal philosophy. He said this in an interview. It’s only giving us more hope that he will restore our playing style back to the club. I wish him well and I strongly believe that he will succeed…

I had a disturbing image of a penguin with pep’s head and struggling with the jacket zipper.

I’m happy. First time ever I have heard an Arsenal manager talk about solutions to the problem rather than juat saying what the problem is.

Maybe he should just say that some of the players are average and not good enough. Lets hope he fixes thing and starts winning some games. Everyone thinks Arteta is Jesus, but he can only do so much. Some players are just not good enough, or don’t mix together well. We need 3-4 solid no nonsense players to do the basics right first. The squad we have is too soft and light weight.

Right, so your idea is for him to go public and berate the quality of the players at his disposal.

All of us know we need investment in midfield and defense but we have to learn to make do with what we have and clearly, we are nowhere near what we are actually capable of.
Btw, no one thinks Arteta is Jesus but the majority feel he is an upgrade on Emery despite being in the job for a couple of weeks. THAT. IS. ALL.

Football is an Arteta
Reply to  Naked Cygan

“Build some fundamentals”? Jeez, you’d think at this level the players should already be well acquainted with the fundamentals. Still, I like what I saw in the last match but I’m also keeping my expectations low. Arteta should be given much more time.

TA actually life for me so far has been about peaking then at some point having to hit reset and return to the basic for things to make sense again. So maybe it’s same or worse for these guys whose lives are literal movies

And they need reminding

How did Wolves beat MC?Speed of movement . Yes it was against 10 .When you watch how teams score you wonder why the gunners cant speed up the game.
The thing is this perennial passing game right to the box gives time for defences to
regroup.As a result you know I know what happens. The worst is the opposition
goes flying away and that’s it.

Liverpool have shown how the tikitika game can be countered by speed,power and
getting everybody involved in attack and defence.
If Arteta plays this type of game against a speedy MU he will lose.Make no mistake.
As for 4th,forget it.There has to be a dramatic and significant improvement to even
stand a chance remotely.
Todays game against Lampard will indicate how Arsenal will fare in the coming months

Maybe this is stoopid but 4th is still there for us. If we beat Chelsea we’re 5 points off them with half a campaign to go.

Mathematically yes but realistically? We are talking about Chelsea, United, spurs and Us here competing for one spot. That is excluding the other teams above us already which is silly because they are there on merit.

It would take a sustained winning run and all the other teams going on a bad run at the same time. Better not to dream about it now and concentrate on getting better, Europa league and FA. When/if the time comes and we are in realistic conditions for 4th then we can concentrate on that.

The truth hurts but it is good for you.

Yeah, but that sort of mentality pretty much cost us a spot last year when we more or less phoned it in in the league and focussed on Europa, when in the end if we fought tooth and nail in the league we would have qualified. 4th should 100% be the target and I’m sure Arteta would feel disappointed if we didn’t get it. So should the fans. Now I am absolutely not saying he should be sacked and we should turn on him if we don’t (absolutely not), but if we have proper ambitions we should be scrapping and… Read more »

It’s funny that when we had the last Europa league draw I looked at every team we could face with the dread of embarrassment but with a clear communicator and a clear attempt to dominate games I suddenly feel like it is winnable, moreso than the last two seasons. I really think we could do it this time.
I like Arteta. He seems to have a really strong attitude and message that the players really should get on board with if they are serious about winning competitions.

You know you are an average team when every fixture looks tricky. Now I can imagine how fans at the bottom of the table feel, looking at every fixture like a potential loss. Scary if you think of it.
Hopefully the new era gives us a big improvement so we can get back to the top.

never looked at it that way, but so, so true!….ridiculous that the great Arsenal is allowed to fall that low, really is!

Team need serious surgery no matter what managers says the players we have are absolutely very limited.The recruiting and scouting department is scary in contrast the Wolves Leicester and even Watford.

Right now, I would settle for Arteta getting just one big performance out of the team. On May 2nd. There can only be one Invincibles.

I think we need to do as much business as we can in January. The reason being that without squad replenishment, we could easily finish outside the Europa qualifying positions, let alone the CL positions. The Europa might not be a huge draw to bug name players, but we are in the knock out stages now with a reasonable chance of progressing to the later stages. I think we’re in a stronger negotiating position now than the one we could have come May (with the same squad and perhaps finishing, say 8th). With this in mind we should be trying… Read more »

Mikel is having to undo over a years worth of Emery’s fucked up training and is trying to instil the solid, basic principles that all our players have had trained out of them. The most important thing is that he’s got everyone on board with his thinking, but the transformation will take a bit of time. Whatever the results in the next few games we can only ask that the effort is there, sometimes it’s not going to work out exactly as planned, but this manager and this team will have my total support every step of the way. I… Read more »

I cant explain it, but for me, this guy just oozes footballing knowledge, know how, confidence, like an Arsenal manager should, which is unbelievable for an inexperienced manager like he is. You just feel there is something special about him, like all his plaudits have been saying all along, when you see him talk about what he wants to do and how he is going to do it. Weirdly, i feel more confident with Arteta, an inexperienced manager in charge, than with Emery, despite all the trophies he has won?

I remember when Nagelsmann burst into the Bundesliga scene. A few of the older coaches were saying Nagelsmann talks as though he had just invented football.
Well, look at him now – sitting pretty already crowned the halfseason champion.
Movers and shakers with clear vision are always like that – they evangelize, not preach. Because they understand that to move mountains, first you must believe.
And Mikel Arteta really looks and sounds like one. I hope he really is.