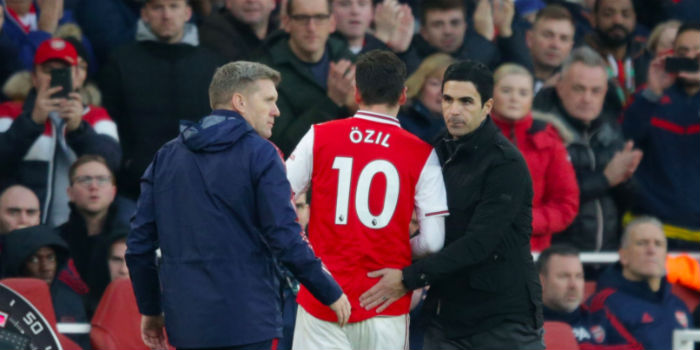 Mikel Arteta says he’s trying to set up his side to get the best out of Mesut Ozil but made clear he won’t be afraid to bench the German if his numbers drop.

The World Cup-winner was full of deft touches and neat passing as he helped Arsenal dominate Chelsea in a bright first half showing at the Emirates on Sunday.

While the Gunners went on to lose 2-1 in the closing stages, the German left the field on 76 minutes to a standing ovation from the home fans; a stark contrast to their reaction a couple of weeks ago when Ozil skulked off following an ineffective performance against Manchester City.

Arteta hopes his former teammate can continue to make a difference.

Speaking at his post-game press conference, he said: “I put him in the team if I see every day that his attitude, his desire and his understanding of what we’re trying to do is there and he has the will.”

“I am hoping that he can sustain that level every three or four days. He’s put in everything he has to try to do that.

He added: “I think his numbers physically have improved so much, and he’s willing – that’s what I see every day in training.

“I know the ability, I know the player we have there.”

It’s no secret that Ozil had a rocky relationship with former coach Unai Emery who dropped the player regularly, especially away from home, even when his side were crying out for creativity in the centre of the park.

In contrast, Arteta seems determined to give the German the infrastructure he needs to flourish. Assuming he’s delivering the goods.

“The structure has to help him for him to be able to take everything that he has inside,” he said.

“He needs the team to play in a certain way to facilitate and take his strengths more and more in the game. That’s what we are trying to do.”

“If he’s in a better moment than somebody else, I will pick him. The moment that this changes, then he won’t play,” he said.

Happy new year everyone! Catch you all in the roaring twenties. Let’s hope it’s a decade full of trophies, goals and the demise of the still trophyless Sp*rs.

Wasn’t this article briefly up the other day? If so, why pull it until now?

I’d like to see the press conference. I can’t find it anywhere?

I really don’t understand why the room isn’t mic’d up better for press conferences so you can hear the questions more clearly.

Big room = lots of mics + mixer (auto/human) or a boom operator (like BBC Question Time). Different budget and unfortunately these PL clubs don’t have the spare change. I could do all those things but no gives me the call “\_(‘!’)_/”

Will you? If you will, then you’re a rare breed amongst today’s Gooners. Most of our supporters are so scared to eat humble pie, that they’d rather the club gets totally destroyed than to be proven wrong themselves.

No humble pie
Reply to  ThaatArsenalGuy

I don’t need to eat any humble pie as I’ve backed him as I know he’s got the talent he just needs a manager who loves him and won’t him treat him different as he has natural talent some harder working players don’t have.

Same article different day, left a comment on it first time round so thought I better do so again. Good luck to all gunners for the new year and may plenty of 3pts come our way.

Happy New Year everyone. Health, happiness, peace and a resurgent Arsenal in 2020.

Oh, and as for Ozil: an absolutely amazing player who should have won the title and the Champions League with us. Alas, though, he is a bit of a spent force now.

Happy new year to all

We don’t keep enough of the ball to play to Ozil’s strenghts, neighter do we have a settled enough spine to justify fim starting.

Ozil is the best Thoracic vertebrae we have got, other vertebrae aren’t very good in his position.

I think Arteta has a vision for the club and hopefully it’s 2020 like the New Year. Happy New year to all no matter what opinions we hold let’s remember we all want the best for our club.

I only wish that were true mate. For example, do you think Robbie Lyle wants the best for our club, or the best for his bank balance? Because the two are, without a doubt, mutually exclusive.

He wants what’s best for the Club. He was an Arsenal fan long before AFTV. If Arsenal wins trophies, I reckon the views will be just as big. It’s not Robbie’s fault that Arsenal losing draws traffic to his videos?

Limpar from the halfway line
Reply to  Der32

By all accounts Robbie is a decent guy and a genuine gooner. But come on mate, he’s making the club a laughing stock. Throwing the worst of our support into the limelight for everyone to laugh at. You think that’s wanting the best for the club or wanting the best for his follows/likes/bank?

The Jeremy Kyle of football.

It’s not just AFTV, I can’t even open Arseblog in the 2hrs after any loss. Just look at the comment section, a lot more comments when we lose not as many when win or draw.

AFTV reflects the fans, it’s just a platform. Complaining is therapeutic, people can’t help it. The responsible ones are a bit more measured and leave prejudices aside..

‘Same Old Arsenal’ have a more level headed podcast panel which can include Graham and Lee Judges off aftv, Harry Symeou, and regulars, Dan and Craig. None of the ‘fam’ ‘blud’ and wannabe ‘gangsta DJ’ crap. They get stuck in and argue if needed, but it’s always polite and level headed most of the time. Recommended.

I like you mikel, and will give you trust and time, but DO NOT use the word ‘moment’ during interviews. It’s unacceptable and brings back nightmares

It’s a nice idea to play to the strength of Ozil. The team a player with a 20-20 vision this year.

Our white elephant project! When do we severe ties with this guy and just count our losses?

Ozil is like the grumpy, carefree and overpaid owner’s son that everybody has to somehow put up with and tolerate at work.

On a good note, we are hopefully starting 2020 with a win! Happy new year guys!

This Ozil thing is getting annoying. If any player is underperforming they should be dropped. If he is doing well keep playing him and move on, end of story. I don’t understand why every manager should kiss his ass, or explain himself why Ozil is dropped. Same rule should apply to all players. On another note, in 2 years no one will remember how many passes a player made in a game, or how many flicks, fancy moves or dribbles he performed. All we care is winning, getting 3 points, the player scoring, making an assist, or making sure the… Read more »

He will surely be moved on soon I’m pretty sure. Inhibiting factors include the fact that clubs are not coming for him due to his high wages and underperformance plus we do not really have enough funds now to get a like for like replacement. Hence, best option is to manage him, efficiently like I suppose Arteta will. Of course Arteta has clearly stated that he will be dropped if his numbers are not adding up.

I love him and hope he stays for a long time. He’s not going anywhere because he hasn’t put himself in the marketplace. Unai Emery completely wasted his talent and set him up to expose his weaknesses and nullify his strengths. Mikel understands him, knows what he can bring, I just wish some of our fan could get over their hate and see what he actually does for the team. He creates chances and so he relies on others to do their jobs and finish them, which hasn’t been happening. I’m hoping we finally build a team around him, like… Read more »

Ozil hopefully plays well & finds consistency but you don’t build a team around an almost 32 year old. We’re very limited right now so Arteta really has to use what he has at his disposal and he appears to be attempting to rebuild some confidence via publicly backing players.

It would be a pleasant surprise if Ozil suddenly woke up, and started putting in regular 7-8/10 performances, i won’t hold my breath though. Arteta saying that United are a brilliant counter attacking team, but instead of dropping off, he wants us to play a possession based game on the front foot. Lambs and slaughter come to mind. We’ve got huge injuries, and not the most talented bunch to begin with. Seen United a bit this season, they’re devastating on the counter, could have been 5-0 up at City at half time, they tore through them at will, they’re not… Read more »

No progress for Arsenal until we throw Ozil out. We can never get the balance in the team or Midfield right with Ozil. He is Minus1 to the team, that is why we have always had acute defensive problems for 4-5yrs now. Ozil Must go or else Out Arsenal continue going down!

I think we won with Ozil today, but yeh you right ?

Why are we still trying to play with a number 10? We should have kept Iwobi and trashed Ozil. Ozil doesn’t belong in a 433 squad as Unai has said we suffer on the press. We suffer on tactics and it exposes are weakness in defense…speed.

How about these guys in the window?Eric bailly and Ngolo Kante? Idk their contract standings but these are the positions we need

At bloody last. We have a rare talent and we’re going to blooming well use him