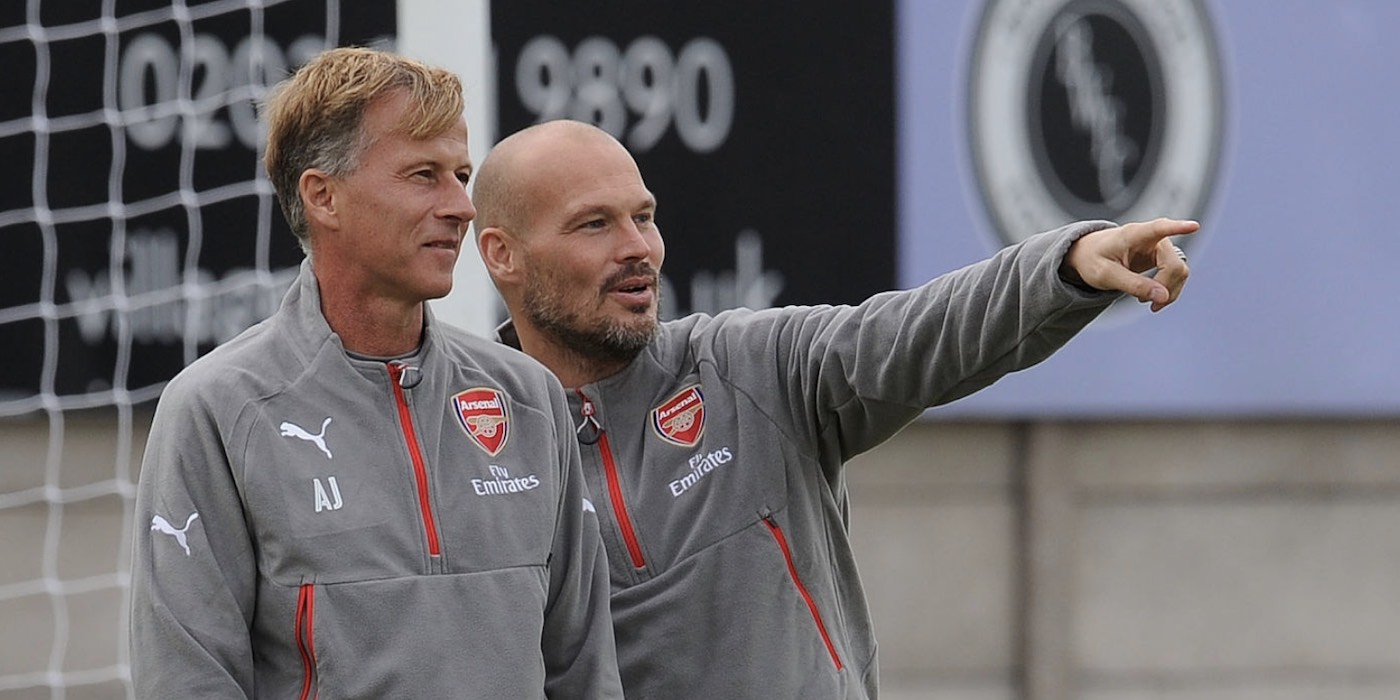 Andries Jonker has extolled the virtues of Freddie Ljungberg as a coach, and has backed him to take over from Unai Emery on a permanent basis.

The Dutchman spent almost three years as the Gunners’ Academy Manager, and the former Invincible was one his coaches during that spell. The pair also left the club at the same time in 2017 when Jonker was appointed manager of Wolfsburg and Ljungberg went along as his assistant.

It was an ill-fated move that lasted just 6 months, but Freddie was brought back into the Arsenal fold by Per Mertesacker to manage the U23s, and following Emery’s departure last week was appointed interim Head Coach.

His former boss believes he’s got what it takes to do the job on a full-time basis, telling Sky Sports, “I would support the guts in making the choice of Freddie Ljungberg. Arsene had been there many, many years and he did it his way. Then came another coach who had a very difficult time.

“I would prefer for them to give the chance to someone who knows Arsenal, knows the academy, knows all those talented players. He also knows the laws of total football.

“Give him time, give him confidence, help him and support him. He is one of Arsenal.

“I would appreciate the guts of the Arsenal bosses if they hired Ljungberg.”

As for what he might bring in terms of football style, Jonker believes the Arsene Wenger influence will play a part.

“Freddie is a lover of really good football, the way Arsenal want to play normally fits him,” he continued.

“He wants his teams to try to play offensive football and be exciting – winning with that. This is the style he likes.

“He will always try to find the combination of having good organisation in his team. Freddie has a good eye for the tactical details for the team and he knows that you cannot only play beautiful players.

“If you want to win you need to find the mix of people who can defend and do the dirty work and then the players who can make the difference and decide matches to your advantage.”

The Swede takes charge of his first home game tonight when Arsenal take on Brighton at the Emirates. After a 2-2 draw with Norwich failed to put an end to a win-less streak that goes back to October 6th, tonight is a chance to take a very valuable three points.

Arteta: Ljungberg can be very valuable to us

Leno: Top four finish is still in our hands

I was watching yesterday training session I gotta say I liked what I saw, I think if we give him enough time, he is cooking something really delicious. I think even players are behind him and everyone is eager to impress him. Of course it will help with not leaking the list of names who may or may not be Emery Successor. Not good for morale just let us see after handful of games how will this play out.

By the looks of the training video shared, he was working them hard. Timed “windsprint” pressing, movement, and possession drills- they looked like they were being pushed. It was good to see.

If Freddie is to make a real mark at Arsenal, he’ll need to invigorate the spine of the team.
We need a new CB – or two, a Vieira in front of them, and another creative midfielder to complement özil.
My slight worry is: does he have the pull to draw these players to Arsenal, especially as it is looking likely we’ll be without CL football next season?

I have really liked what I have seen with Freddie. Both in yesterday’s training video clips and the press conference. He gave the media an area where we needed to improve, transitioning, rather than just saying Defence or conceding less goals. Let’s see if there is any improvement in the coming games.
I really want Freddie to succeed.
The players didn’t really take to Emery, yet you just know that there is immediate respect for Freddie as he was a player for Arsenal himself. Hopefully take the 3 points tonight.

The more I see him, the more I like him. Let’s take the points tonight lads!

I really hope he gets the job permanently, he is already at the club and knows it well. It might take a while to fully impose his style and ideas on the team and build his own backroom staff but I really hope we as fans support him fully cause he is one of us. Getting a big name coach will also not guarantee success and you never know he might turn out to be our very own guardiola

When Freddie went to Wolfsberg, Arsene said in a press conference that the club had allowed him to leave only if he made a promise to come back. They obviously saw something special in him. I really want Freddie to succeed, watching the press conferences and the training clips, it looks like he’s got a good plan, and a slightly spiky determination hidden behind the charm. “It’s fuckin’ excellent”! And who needs a suit when you’ve got those red shoes, pure class.

“Spiky determination” definitely characterizes what we know if him from his playing days!

This is a fun watch. Many sightings of God, Henry, Pires, Kanu, Lauren, etc. Good times.

Time will tell how good he is

T.A.
Reply to  Once a gunner

Exactly. No amount of wishful thinking can change the fact that we are not playing well. I for one will reserve judgement and just go one match at a time.

If Freddie can get us playing good football, why make a hasty change?
These losers in management, Raul, Vinai, Edu et al., and most of all our lame ownership, have let this club slide into mid-table mediocrity.
Emery blew it and instead of sacking him in Baku, or even after Watford, they threw away the season.
So unless Freddie massively shits the bed, he stays until the end of the year.

from what can be discern from limited view of training sessions, he seems to be trying to get the players (rightly) to move the ball quicker and more efficiently with less touches. He was showing one of the players but making a point to the entire group to let the ball across the body and pass rather than trap and then pass. Also looked like he had a drill set up like footy billiards keepsy in a small five a side arrangement which further seem to work on bolstering quick movement both off and on the ball. This could be… Read more »

I wish the club would come out and just say that Freddie had the job until at least the summer and then will reassess the season along with Freddie’s future. It gives assurances to him that he has the time needed to rectify the shortcomings in performances and ends and immediate speculation allowing Freddie and the players to focus on the job at hand. Personally I’d love to see him turn the season around solidify a top 4/5 position and be offered the job full time with backing in the summer to sign the players he needs in the poorest… Read more »

I don’t know if FL is the right guy for the job, but, for what its worth, I do know that as long as he is in charge he has my full support.